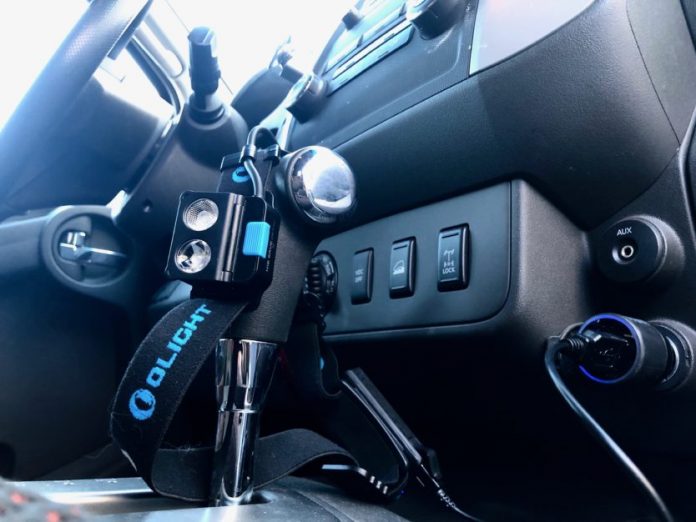 I’m consistently amazed by just how many people still don’t use headlamps when they find themselves in need of a flashlight. When I was serving in the military, there were two things that I always had on my person in the field –a multi-tool and a headlamp. Any time I’m out camping or hiking with friends, they consistently ask me about my headlamp and which model to purchase. Over the years I’ve had the chance to use dozens of models from various companies like Petzl, Black Diamond and others. Some I’ve really liked and others I’ve detested so much that I throw them in my gear graveyard. But when Olight reached out to me for a product review, I was curious to see what would make them a contender in the market.

Olight sent me their H16 Wave and wanted me to put it to the test on my latest trip up the coast of California on my camping adventure. It became VERY evident after 5 minutes of wearing the H16 that Olight hit a home run. First, the H16 has a waterproof and rechargeable lightweight battery pack that sits tightly on the rear of the headband with a sturdy cable running around the side to the main bulb. Some people may not be a fan of a rechargeable battery pack, but with a two hour plus run time at 500 lumens and 160 hours at 5 lumens, it proved to be plenty of juice for me over the course of a 7-day adventure. It also helps that I had the ability to recharge it in my truck with the USB adapter. The battery pack also features four visual battery level indicators with an audible beep at 10% battery to alert the user that it will go out soon.

The H16 boasts a 500 Lumen maximum output with two other settings at 100 lumens and 5 lumens. Anything more than 500 lumens would probably qualify you to join the X-Men, so I’m quite content with the light output. Even with the battery pack, the H16 comes in at a measly 4 ounces making it even lighter than my Petzl and the most comfortable headlamp I’ve worn to date. The crown jewel feature of the H16 is the wave feature. Once the light is on, push and hold the blue On/Off button until the light blinks once. Now you are able to simply wave your hand in front of the light 2-6 inches and the headlamp will turn off and on again with every pass. After a while, I actually felt like a Jedi trying to do some mind trick of persuasion. The range for this feature is only 6 inches, so you don’t need to worry about the light turning on or off accidentally. This proved to be incredibly useful when I was preparing dinner and I didn’t want to touch my headlamp with bloody hands. I can think of a million more times when this feature will come in handy and I’m shocked more companies aren’t doing it.

Olight has really outdone themselves and has created a headlamp far superior to anything I’ve used before. The wave feature alone is enough to get me to switch from the larger brands. But couple that with the long battery life, rechargeability and high lumens and you have a lifelong Olight fan on your hands. MSRP – $59.99