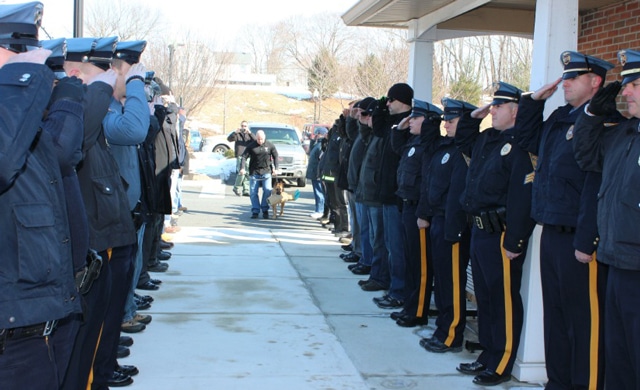 After suffering from deteriorating health problems for two years, Judge, a retired West Deptford Township, New Jersey, police dog, was walked into a Woolwich Township animal hospital to put a permanent end to his suffering this week.

Judge, who aided in 152 arrests, the seizure of three vehicles, confiscating three illegal handguns, multiple drug seizures and confiscation of more than $47,000 in cash, was diagnosed with Cushings Disease, which led to vomiting, hair loss and bloating. Eventually, medical professionals found multiple masses on Judge’s body and discovered there was little more that could be done for the dog.

Judge had become so weak, that his handlers were unsure if he would be able to make the walk to the hospital door, but with a training sleeve – his favorite toy – gripped tight in his mouth, Judge made the walk and was soon euthanized.