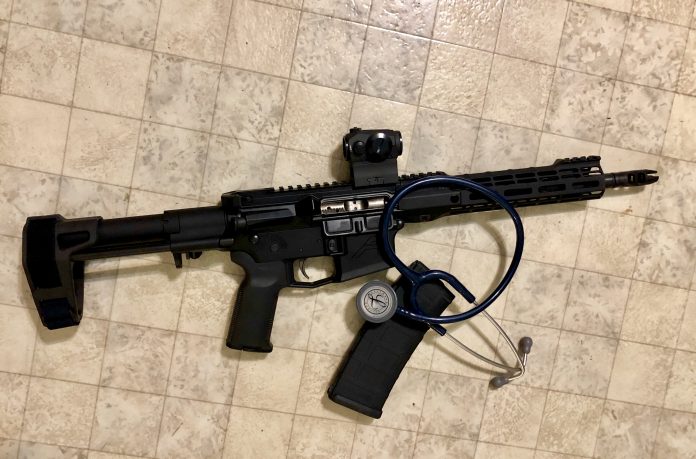 Some gun colleagues and I were having a conversation recently and someone mentioned a “SHTF Office Gun”.  I remember laughing to myself, saying something like – sheesh, can you imagine a Pediatric Office SHTF Gun? That would go over like a lead balloon (no pun intended).

But when you really think about it, we are a soft target, located very near a school. This startling reality was pointed out to me by a different friend when we were talking about Stop the Bleed recently.

I have a lot of friends who get paid to think about and plan for bad ‘SHTF’ things happening. Nobody gives them a hard time about that because they are LE and EMS. Their job is to think the unthinkable.

But on serious reflection, I get paid to think about bad things happening too. It’s my job to think about awful things that happen to kids, and how best to make sure those things don’t happen, or to catch them quickly if they do. Vaccination, regular growth and development screening, monitoring and treating infections, following up on suspicious neurological signs – all of these things are part of my job.

So why is it unthinkable to plan for a violent drug addict or a nutcase mass shooter taking his “Plan B” to our office from the school down the street? Hell, some of the parents in our practice ARE drug addicts.  Our staff has people lose their shit at them on the semi-regular. Why then is it terrible of me to think about a response to these potential events?

This shouldn’t be unthinkable. It should be INFINITELY thinkable and planned for. But the American Academy of Pediatrics treats guns as if they were a disease rather than a “vaccine” against dangerous predators. So you won’t find any office security recommendations on the AAP website. In fact, many parents would have an absolute cow if they thought a firearm was on the premises, just like they have a cow over armed teachers in schools.

All I want to do is keep a lead injection device handy in case of such an attack. But my practice partner would defecate a cinderblock, so realistically it’s never going to happen. We have lit exits signs, fire extinguisher, smoke alarms, and every other building safety device as required by law. But nothing with which to protect ourselves should a violent person try to invade the premises.

With the wheels in my head already turning, I started thinking some of those unthinkable things – as if I were writing an urban fantasy novel or something.  I started playing “what if?”. Except this stuff isn’t fantasy, it’s reality. Violent things happen in the world. The chances of it happening specifically “here” are statistically small, but it pays to be prepared.

I started thinking – what if we went on lock-down due to an active shooter event at the school down the street? We do have inner hallways away from windows where we could shelter people. We do have more than one entrance, but only the main entrance is unlocked. If we were notified by law enforcement of such an event, that door could be quickly deadbolted. Somebody could shoot out a window for entry I suppose, but there isn’t a lot to do about building design after-the-fact. And installing bullet-resistant glass seems like cost-prohibitive overkill in a building that’s over sixty years old.

“IF” I kept a SHTF firearm at the office, it would have to be locked up. That is non-negotiable. I’m frequently away from my desk seeing patients, and there are tiny humans with curious fingers wandering all over the place. I also cannot realistically carry on-body during work hours as little children have no boundaries and are always patting on me and invading personal space. I would be “made” in short order. I’m thinking an AR pistol might be a viable option because of the smaller size, magazine capacity, maneuverability, velocity, and red dot.

Secure storage for such a SHTF gun would be essential. Secure-It has combination lock bolt-on safes that might work under my desk top such as the Fast box 40 and Fastbox 47. I bought a model 47 for home use, so it might work in the office too.

This would be strictly a defensive gun obviously. I’m not Wonder Woman. Realistically, I’m not going to be clearing the building. In the case of a lock-down, after we got everyone herded into interior rooms away from windows and doors, I’d be hunkered down behind cover watching a door that might get kicked in while we wait for the SWAT team to arrive or for law enforcement to announce all clear. I don’t have any illusions of heroism beyond trying to protect my office staff and patients.

It might sound crazy. It might sound “Unthinkable”. But if I, as the firearm owner of the practice, don’t think about it – who will?

When I did an internet search for information about medical office security, I got all kinds of hits related to HIPAA and information security, but very little about the security of the physical building and the physical protection of staff and patients.

Dr John Edeen of Doctors For Responsible Gun Ownership (DRGO) has done a good deal of work regarding hospital vulnerability and advocating for workplace carry rules, but I haven’t seen much out there for medical office safety. Maybe I’m just not looking in the right place.

There is precedent. Has everyone forgotten about the psychiatrist who defended himself and staff with his own handgun in 2014?

As much as no one likes to think about it, when it comes right down to it, a SHTF office gun may be one of the few cost-effective options we have to keep our staff and patients safe in the event of a violent attack.