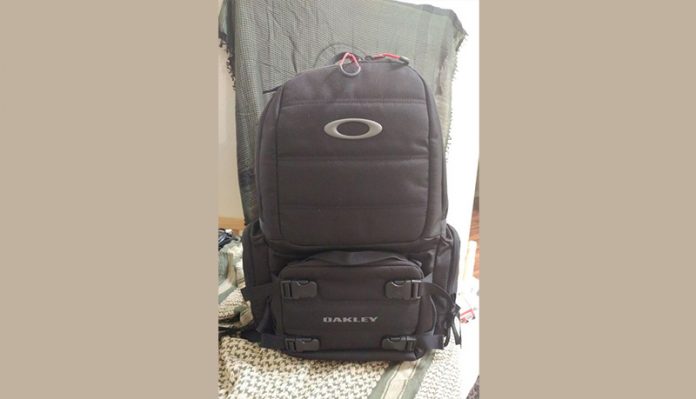 This week, Matt Owen goes over is EDC Bag for his SBR.  He does into detail on the Oakley Chamber Range Bag – Enjoy!

This bus station is always the busiest, and you stand with your back to a wall watching the crowds gather and disperse. You try to passively take in everyone and see if anything stands out, and sure enough – there’s one. You know, that guy. An otherwise innocuous tennis bag is slung over his shoulder, which would be anything but noteworthy except that he’s also wearing 5.11 tactical pants, a pair of Salomons, a Grunt Style t-shirt, and a pre-tattered cap with a Spartan helmet on it. That bag isn’t fooling many people; that’s no tennis racket, and he’s no Federer.

Fortunately for you, carrying covertly comes easy, and as the bus doors swing open for your route, you confidently step on board knowing your bag draws as much attention as a second-hand “Vouis Litton” from the flea market. It may not wow the guys at the range – at least, not until you open it – but then again, that’s not what being low profile is all about, is it?

When I built my SBR, I wanted to have a way to carry it to and from work (I worked at a firearms retail store for a long time) without making it obvious what I was doing. I realized that my options were pretty limited; not necessarily because of what was available, but because what I was wanting clashed with what was possible. When you have a 10.5” upper, even with a nifty collapsing stock like the Troy Tomahawk, you’re still looking at a lengthy piece. A regular old backpack won’t fit it, so you’re going to have to get that ugly tennis bag and look ridiculous, a tactical bag that advertises your intentions, or a big Eberlestock-style “hiking” bag that would look utterly insane as you ride around on the Metro.

It wasn’t until working the Orlando Gun Show one day that I spotted a potential solution, and after haggling it down to a fair price I took it home and gave it a go. Almost three years later, I haven’t looked back! Since the precedent was set in an earlier article, let’s start with the cons first and finish on a high note, and you can see if the Oakley Range Bag is something you want to add to your tool kit. *Note: While Oakley has discontinued selling it on their website, it’s still available through multiple online retailers.

Officially dubbed the “Black Chamber Range Bag”, this pack is a normal-size backpack offering a large amount of space. However, I don’t like the internal layout. There are no dedicated mag pouches, be it pistol or AR, and the pouches that are there leave mags flopping around or zipped away. Adding those in or even providing internal PALS webbing to allow the user to add their own would be a nice plus.

Perhaps it’s nitpicking, but the detachable mini-bag on the front is also a complaint for me. While it’s nice to be able to have a “to go” portion, if I don’t want to leave it on there, the buckles flop around like four small tentacles. Strangely enough, the pack boasts the ability to remove this and clip it over your chest via the main straps; not only does that completely negate your low-pro appearance, but it also means they knew the buckles would be unused and still didn’t add a solution.

Another issue I had was how wide it opened or didn’t open really. If all you had in here were a couple textbooks for class and a small laptop, you’d be golden, but trying to pull out a typical range kit (or, for me, an SBR) would prove difficult. The zippers barely made it to being vertical, so the opening was always a little tight, and folding the bag over was a half-ass solution that often-made things more frustrating.

My last gripe is purely superficial, and that’s the color options. It’s available in Nothing Special Black, Look At Me Olive Drab, and Please “Stare At Me Multicam”. Throw in a couple gray-man-ready color schemes, like a navy-and-white or gray-and-blue, so people using this as an EDC for all things tactical feel more assured they aren’t drawing weird looks.

The biggest thing for me is the biggest thing – the main compartment. I used to carry my SBR broken down and it fit perfectly with plenty of room to spare. There’s a Velcro bar across the back near the top that comes with a retention loop; add a second one on there and the SBR was snug but easily accessible. Despite the varying sizes and needs for SBRs and pistol-types, the Chamber Range Bag was able to meet a few different models I tried in the shop, including a Draco pistol, and leave me the space to drop in extras.

The two pouches on the side also came into play for me. Though seemingly small, they have ample room as well, and I fit my Ms. Clean First Aid Kit, fire-starter kit, LifeStraw, Clif Bar, and compass into one, leaving the other for my battery backup, emergency blanket, chemlights, flashlight, and larger-than-pocket knife. By playing with the spread, I was able to balance the weight perfectly and not create fatigue on one side or the other while still having everything I felt I needed in an EDC.

The back sleeve also came into play during some road trips and training seminars for my next job. It has ample room for even a bulky Alienware, so those of you with the newest Macbook Air or XPS 13 will find it perfect, and it offers two divided sections for your Top Secret dossier and latest edition of Recoil magazine to slip into. Those of you worried about impact should fear not, as the pack sports a solid backboard and has a cushioned liner between the SBR section and the laptop section.

Definitely worth noting is the fact that after almost three years of use, the only wear that is visible is some discoloration (my fault for leaving it in the car, then in the workshop, then under the dog) and some wrinkles in the shoulder straps (but don’t we all wrinkle with age?). The interior has yet to rip anywhere, all zippers function as they did on day one, and the buckles still snap like a bolt going home.

Lastly, and maybe even more important than the interior size, is the appearance. I didn’t want to look like “Andre Agassi meets Taran Butler”, I didn’t want to wear an olive drab billboard, and I certainly didn’t want to be that crazy guy with a 4-foot tall hiking backpack in the middle of Orlando. Oakley’s solution, be it intentional or not, has been the perfect balance of tactical readiness with gray-man blend-ability.

For an average of $150, it’s hard to go wrong, and if it means you’re not looking like a strange mix of Rafael Nadal and The Punisher, then pick one up and disappear into the crowds.