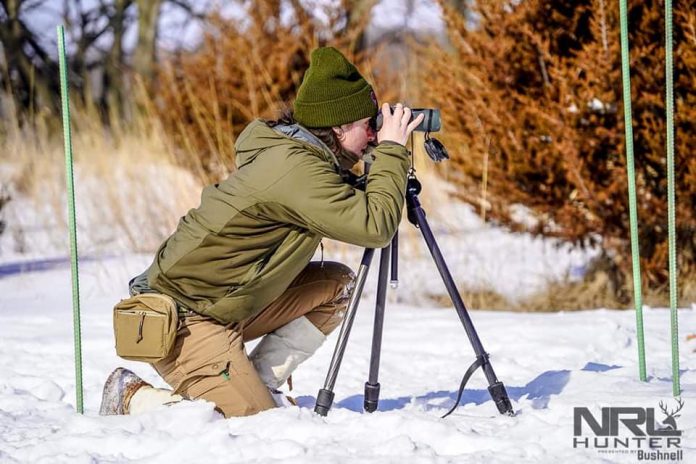 My expectations for the first National Rifle League Hunter (NRLH) match were simple, it was going to be a match that is geared towards hunters… which I was not. Meaning, ranging your own targets and building your shooting positions on the fly. I was nervous in the fact that I am not a hunter and on the competition side I come from a world of shooting that I am given the target, given the range, and am able to watch others shoot the stage before I do. Mind you also, I have never shot from a tripod nor shot a 11 pound top loader, which I would be running for the series.

Nervous was an understatement.

Thursday, the day before check in day, all of the Range Officers (R/O) shot through the 18 stages. This allowed them to get their points and still R/O. It also allowed them to lawyer through each stage ensuring that the rules were good to go and stages were able to be shot fairly.

Friday, train up/check in day. This match was special in the fact that it involved a 4 hour train up given by Chaz Macrandar, the match director, and Isaiah Curtis, a top shooter within the NRL. The goal was to ensure that the rules and flow were understood while also giving new shooters (with everyone technically being a new shooter) a chance at success in this new game.

Before the train up, shooters arrived around 10 am to check in. Your rifle was weighed, tagged by a colored zip tie to show the class, and then chrono graphed to ensure that it was meeting power factor. (Power factor is bullet weight times velocity (B x V = Power Factor). If your rifle was overweight ,past 12 lbs, you would be upclassed to heavy, and if you were over 16lbs you could still shoot but were not allowed to add points for the finale. I was shooting factory class and weighed in at 11.2lbs.

You then had a chance to check zero. The train up was a great addition to the weekend. Four mock stages were set up in a different portion of the range so no targets were seen prior to the match. Each instructor was at a stage to help you out. Each mock up stage had different targets and was set up so that you had to build a different style shooting position, IE off a tripod, pack, or bipod etc.

It was a true life saver for me as I was able to get comfortable with shooting off a tripod and learning how to find the targets.

Which, in itself, seems simple right?

You’ll see why in a second.

The train up also gave me a chance to figure out how I was going to run my gear during the stages. During each stage you have to bring everything with you, as you will be immediately leaving that stage after you are done shooting to go to the next. Your pack, binos, gun, and tripod will all be with you AND STOWED when you walk onto the stage. I ended up running my gamechanger on a D clip on my pack, my tripod on the side of my pack, my binos on my tripod and my range finder on my belt in a pouch. For my DOPE, I made an index card that went out to 1000 yds with 25 yd increments. I then put that index card inside of a wrist coach. Some taped it to their stock. As I was finding and ranging my targets I decided to use masking tape to wrap around my arm and quickly write down the ranges as I found them.

The National Rifle League Hunter (NRLH) series isn’t meant to just see how your gun performs, its meant to see how everything performs.

At the end of the train up day some questions were asked,

“Well if its snowing how will I get good ranges with my laser range finder?

“Will I know the size of the target?“

You won’t know the size of your target beforehand because coyotes won’t tell you their size before you shoot. For the match the targets were realistically sized as the kill zone of an animal at distance.

“Why doesn’t every target have a sign next to it?”

Every target doesn’t have a sign next to it because it is supposed to be found on the fly. Just like you would scan for normal animals you will scan for these targets

These questions are the whole point of this match. Creating realistic hunting scenarios to be shot in a competitive environment and test your equipment.

Saturday, the first day of the match.

It was around 20 degrees but getting warmer by the hour. Every shooter was in warm hunting gear, I didn’t see one jersey all weekend, which was awesome. We went hot around 9 am after a quick shooters brief. Two shooters were on each stage in the “holding area”.

Before each stage there is a holding area that is meant to be your wait period ensuring that you don’t see or hear any of the stage before your turn. In the holding area there is a sign. The sign states how many targets there will be, what animals they will be, and how many positions you need to shoot from during the stage.

Your time of 4 minutes is started when the R/O says go and you leave the holding area. You then run to the stage where you see one ranging post, two scanning target posts, and shooting position boxes. The idea is that you can range from the post and will find your targets while staying in between the two scanning posts. When shooting from the positional boxes you can shoot in any way you want, just have to be inside the boxes. The boxes were often pretty large giving you opportunities to shoot how you want. The target order was set up so that you had to go from nearest to furthest and couldn’t skip, unless you stated you were skipping a previous engagement.

Many stages were 4 minutes to shoot 4 targets from one position.

The Match Director did an amazing job in setting these stages up. Finding the targets was a chore already, with ensuring that it was the right animal and looking through trees. Note: There were times when I was waiting at my stage and I looked around and I realized, I am in the woods. We are literally doing a match in the woods, an environment that any hunter would use during the hunting season. It was awesome.

The next challenge was ranging it. Oftentimes you had to move around a bit to get a good range on one target vs. another, just due to things being in the line of sight. Then you had to set up your position, which for 4 targets may not all be the same. Many great shooters were not making it to the fourth target, some not even finding it. It was a challenge but a challenge is what is desired, with the caliber of shooters we now have in this sport.

The points were scored as 2 points for a first round hit, and 1 point for a 2nd round hit. If you missed a target on the 2nd round then you move onto the next target. After the 4 minutes or engaging your 4th target, you quickly grabbed all of your brass and equipment and moved onto the next stage. The set up was slick because in the next holding area you had time to reorganize and reset your gear. That was done on purpose, ensuring that nobody was waiting on anyone. At the beginning of the day the goal was to get through 10 stages. We ended up getting through all 18 stages with an hour lunch in between. It went fast and smooth.

After the match on that Saturday we did a shooter social at a local bar and grill. It was a good time to just relax and go over the match while being surrounded by great people.

Sunday, the next morning was the awards ceremony. Trophies for top 3 factory, top 3 open light, and top 3 open heavy were given out. The prize table was random draw and was loaded with prizes. I was able to pull a Vortex Optics Viper HS scope off the table. Thank you so much to all of the sponsors.

With how nervous I was to do this match I got a lot of support and care from people. Whether it was tips on ranging or tripod use they didn’t allow me to go into this and fail. My most proud moment during this match was during a coyote stage. I just got done impacting my second target and knew that time was ticking down. During each stage I often just ranged the two first targets and built my positions and went from there. I had my gun on the third target and without using my laser range finder I ended up giving my best judgement off my last engagement, dialed my dope, fired…impact..time. Best feeling ever.

How many times do you hear a story when someone says “man, I saw that coyote and held over and got it in the shoulders.” Or something along those lines? A decision that needed to be made quickly, yet was made correctly and safely.

Throughout the day I had many R/O’s tell me that they haven’t seen one person shoot a stage the same way all day. Isn’t that the beauty of this series? It is truly on you in every sense of the way, and isn’t hunting as well? It is you finding that animal, ranging it, reading it, and hitting it. If you miss it you may be out of food to put on your table. Now we have a match that is meant to teach and ensure that you have the equipment and knowledge to ethically hunt an animal.

Rounds Fired
I came to the match with 150 rounds due to the match having a maximum number of rounds being 144 rounds and the train up. I ended up firing only 97 the whole weekend.

A huge thank you to Chaz and his wonderful family for putting on a truly advanced match. Your hardwork and passion for the sport did not go unnoticed. The Heartland Harvester was the perfect match to kick off this brand new series of NRL Hunter. Way to set the bar Chaz.