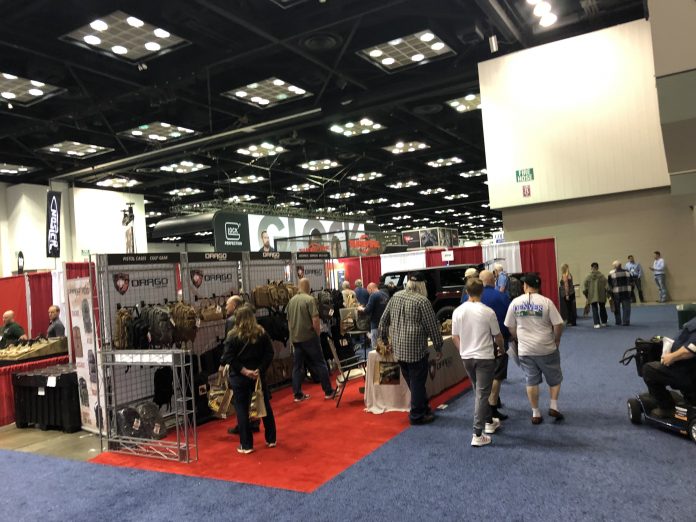 It was a rolling start to the morning here at NRAAM in Indy. It’s honestly light on new products but we managed to find a few.

U.S. Optics is adding a distance precision option to the TS line and since they are done with their move the TS-6X and TS-8X will be out of their warehouse shortly.

The new TS 2.5-20 sports a 50mm objective lense, illuminated Front Focal Plane reticle in Mil or MOA, turrets in 1/10 MIL or 1/4 MOA, and parallax adjustment down to 10 yards. That parallax focus will be most useful for anyone trying to get an initial zero on the shorter indoor ranges.

With a tag of ~$1500 it’s one I’m looking forward to topping a rifle with for a little distance. It’s a more forgiving option on the bank account than the B-Series but incorporates a fine selection of those features it appears.

The SRO has made the most waves I’ve seen so far overall, Travis will have a little more on this guy later.

The historical displays are up and dotted around the low booth #’s. NSSA had a display featuring several pieces on Vietnam tech with a few folks to answer questions, one at at least with time relevant hands on experience.

The ZRO Delta Z9’s are just about ready to go. The alloy “build a Glocks” are an intriguing push toward boutique pick your feature race, duty, carry guns. I’m a stock Glock guy but I do want to play with these because I’m also a fan of alloy guns. We’ll see what the year brings.

Zenith has made their little Z5’s a touch smaller on both the front and back ends. The new adjustable braces and stocks have cut down on the mass and bulk of the compact 9mm’s from the larger, heavier, legacy designs.

The threaded only barrel foregoes the tri-lug but keeps threading for a flush fit suppressor. More Z5’s are coming soon according to the Zenith crew. So if you’re waiting on that roller-delay, your delay shouldn’t be much longer.

Now lunch is over so off I go again.