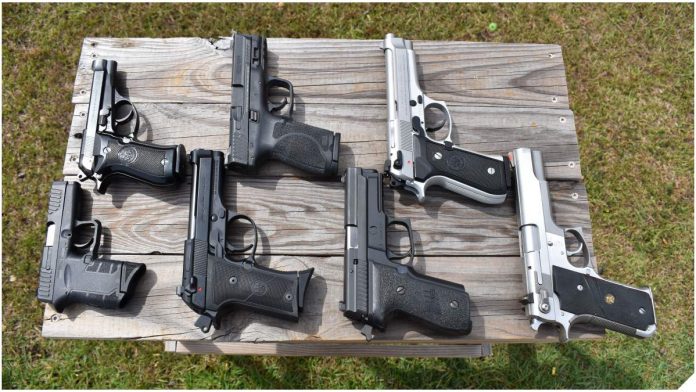 NPR is not known as a bastion of second amendment support. Many of their employees come off as actively hostile towards the notions of individual weapons ownership. Others just don’t appear to be able to mentally grasp the reasoning for a personal weapon. They try, they just aren’t able to walk the mile in the shoes.

It’s that case that seems to crop up with NPR’s coverage of the new Coronavirus gun owners.

As the piece opens we get a look into their headspace, the perspective they are looking at this whole thing from.

As Americans flock to gun stores in the face of coronavirus fears, many gun dealers report an influx of new customers, taking home a deadly weapon for the first time. In response, long-time gun owners from across the U.S. are stepping up to help these newcomers get some safety training in the age of social distancing.

I’ve put the text in bold as I believe this is the crux of the perspective problem, or at least one of the pillars supporting it. A firearm is the only item they are consciously acknowledging as a deadly weapon. Now, it isn’t that they don’t believe these people have a knife block in their kitchen or didn’t drive to the gun store in a vehicle, both of which are lethal, it is the fact they do not consciously make the connection that those two items are deadly too. They aren’t assigning a proportiant risk factor to a knife or a car or any other device, in their minds the gun is inexplicably fundamentally different.

In the minds of aware and active firearm owners firearms are not different. They are different faces on the multi-faceted dice set we call risk. Nothing within ‘Risk’ gets assigned a special value (except Australia) and we see balancing risk with mitigation factors as part of what we do daily. The NPR author appears to give guns a special risk value, they are different.

What I cannot determine is why they are different, perhaps anymore than they can fathom why I want a firearm. My working theory is that because a gun is a deliberately built weapon it occupies that special risk value which is disproportionately magnified from its working societal risk value. Additionally, since other deliberately built weapons, like swords or crossbows, are used in far fewer crimes they get put into the novelty category and are assigned and disproportionately low risk value.

That’s my theory at least. They are not rationalizing and organizing risk the way that we are.

But back to the article. NPR then does a few paragraph highlight Chuck Rossi’s Open Source Defense and the various other online personalities who made content for new gun owners to find and learn. They highlight that gun owners feel an obligation to help new owners safely start their path toward proficiency.

We welcome all the new owners and ask them to please be cautious, but not nervous, ask questions. Ask lots of questions. The reason we have that perspective goes back to how we assign risk.

Next.. NPR brings in ‘The Skeptic’. The reasonable voice that doesn’t project the bafoonish antics of a Moms Demand Actioneer or ‘Ghost Gun’ Kevin de Leon (who are demonstrable morons.) No, they bring in Dr. Emmy Betz.

Dr. Betz studies injury research and she worries that having a gun in the home risks ‘escalating violent confrontations.’

“Specifically, in cases of domestic violence or when someone is suicidal — that having that gun present could turn a situation deadly,” Betz says.

Dr. Betz, I would assume, is not a gun owner. And despite her knowledge within the field of injury statistics I would guess she too cannot rationalize risk the way a firearm owner does. She puts firearms in the special category and assigns them values outside that which she does for other accessible objects.

Am I suggesting unconvicted abusers do not exist? Not in the slightest. I am saying that these legal parameters cannot be vague and pointing to a group with no history of a crime and asking, “but what about that crime?” is about as vague, reaching, and projectionist as it gets.

Then there is the suicide statistic. We have a weird societal dissonance with suicide in which we seem to accept certain methods and reject others (Dr. assisted for example) and there are large swaths of the public morally and ethically opposed to suicide in any form while others see it as a tragedy to be avoided if possible and mourned if it occurs. Suicide is not an easy subject to quantify.

But we do have hard data on a few items, and suicide being independent of method is one we have quite a bit of data on. But how does NPR take on the suicide quandry?

Every year, tens of thousands of people die by firearm suicide or domestic violence homicide. Research has shown that the presence of a gun is associated with a higher risk for both.

Uh oh… a false equivalency. That statement is not untrue, but it certainly reads like domestic violence and suicide must have very similar numbers, right?

The death toll of combining firearm suicides (usually roughly double the homicide total: 21,175 suicides, 11,208 homicides – U.S. 2013 CDC) with domestic violence homicide numbers are in the tens of thousands. But suicide alone is in the tens of thousands. Intimate partner killings account for somewhere between 1500-2500 deaths depending upon the year, usually about 12-18% of the total homicides… which makes them 10% or less of the combined number and won’t move the total into the next 10’s bracket.

You wouldn’t get that distinction from the statement NPR made though, would you?

But do you want to know what item is in the next 10’s bracket? Vehicle deaths: 32,719 (NHTSA 2013). Which brings us back to our perspectives on risk and how we categorize it.

When it is a deliberate death, to include deliberate acts of harm which result in death, method does not matter. If [Act] by [Individual(s)] could reasonably result in my death or the death of someone I am protecting I must act decisively to mitigate that. The risk is already at lethal. Gun, knife, tire iron, car, sword, explosive, are not the thing I need to mitigate, the person(s) using them are.

Suicides are their own category of deliberate death because victim and instigator are one in the same.

Guns, in the minds of people like Dr. Betz, seem to cross categories for the sole reason that a gun was involved. They get their special category because guns are deliberately built weapons. Part of my theory here includes the fundamental and irrational rejection of the necessity of weapons in society. They themselves, the individual, and those of like mind cannot foresee a need therefore there is no need. They cannot rationalize that others who see the need see it just as strongly as they do and on a base level they reject that point of view as naturally inferior and less rational to their own, data be damned.

Gun owners suffer perspective and confirmation bias just as much as anyone else, however it is my observation that informed gun owners are consistently looking at wider data pools and broader perspective ranges (to include that fact that not everyone rationalizes like they do) than the people staunchly opposed to owning guns. This comes with the conjoined conclusion that some of those rationalization perspective will be hostile. That, in turn, means that ‘right’, ‘wrong’, or somewhere between, a lethal threat to you and yours can only be mitigated by some manner of force equivalency.

So although Betz says it is “wonderful” that gun owners are stepping up to offer training, she worries that the combination of more guns plus coronavirus fear and anxiety could lead to more gun deaths.

Dr. Betz, what do they need and what are you doing to help provide it? The gun owning community stepped up and into that need, what have you done?

NPR, are you looking to help these new owners or portray them as neo-barbarians too scared to recognize you don’t ‘need’ a weapon in ‘modern’ society? The false equivalency laced into the report and the line that you leave on with Dr. Betz gives me a pretty good idea of your answer, but I would like to be clear.