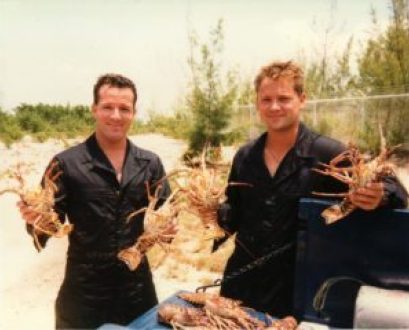 Large creatures under the sea give me the creeps. Grouper startle me, barracuda give me the heebie-jeebies, and sharks…well, sharks make masonry bricks come out of my ass. I wish like hell they didn’t scare me; I would have a bad-boy T-shirt printed up that says, “Ain’t Scared of Sharks.” I could rotate wearing it with my other bad-boy T: “Runs with Scissors.”

In the murky waters of a harbor, a bull shark, common to Key West, Florida waters, is about the size and shape of a dolphin or porpoise. There is a key difference that serves well to distinguish between the two when encountering either in low-visibility conditions: A dolphin undulates vertically, up and down, as it swims. A shark undulates horizontally, from side to side. This becomes important later in the story.

Chuck Studley and I knelt momentarily on the bottom of Calda Channel just as the channel current started to build to a flood. It was about time to get to shore, as there was no negotiating the current at all when it was full ebb or flood at seven knots (eight+ MPH). We huddled together to count how many lobsters we had amassed. Our limit was 26 by license, and we struggled a bit to count them inside the mesh catch-bag we toted.

Suddenly, something stuck its long rostrum over my right shoulder—touching nose to bag for a split second—then left. I was paralyzed as I turned to see a sea creature larger than myself swimming away…undulating up and down as it departed. It was just a curious dolphin, popping in to see for itself what was holding our interest.

My heart was galloping but I was at ease following my recognition. Chuck and I gave each other a “F*** it, there’s enough in there —let’s just go!” acknowledgment and flippered like Flipper toward the safety of the shore. With no B-Jesus left in either one of us, we made our departure to clean and divide our catch. B-Jesus gone notwithstanding, it had been a great day.

Author (left) and Chuck Studley at the culmination of a decent bug hunt in Key West, Florida. It was on this same day that the dolphin poked his nose in to see what we were up to (photo courtesy of the private Charles Studley collection).

“Boys, there’s a sunken vessel in the Coast Guard harbor, and we’re going to salvage it today,” our senior sergeant happily announced. I had never done a salvage operation before, so I was stoked. Mine was a military tactical diver profession, not a utility-based one that involved salvaging sunken boats. Our plan was going to entail lift bags—bags inflated with air at depth that would gradually pull the vessel from the harbor bottom to very near the surface. A boat under power would then tow the vessel. The forward momentum and the vessel’s contour would drive it higher and push the water out of the back.

“Wow, a shipwreck dive…dude, I wonder if we’ll find any sunken treasure!” one of the lads cracked.

That was Chuck Studley’s cue. “You looking for treasure? I got yer jewels right here, pal!” he bellowed as he grabbed his penile package. Never a missed opportunity for Chuck.

And so it went.

We entered the drink at the spot right near the Coast Guard dock where the sunken vessel was reported. Sinking to the bottom, we settled darn-near right into the wreck. There wasn’t much to it—just a 15-foot aluminum craft. We busied ourselves finding anchor points on the craft to attach lift bags.

With auxiliary air hoses on our SCUBA tank regulators, we inflated the four lift bags on four “corners” of the vessel simultaneously, remembering to only fill the bags half full as the air would expand to double its volume or more before it reached the surface.

Over-pressure release valves on the bags kept them from bursting. The little boat slowly got some lift, then raced toward the surface as the air expanded under the lessening pressure. If nothing else, it was pretty cool to see how everything in the movies had actually worked.

A hard thump on my shoulder drew my attention to another diver who had suddenly turned into a cyclops and pointed enthusiastically to an approaching image in the murky water. We both froze as the vision, which was undulating horizontally, side to side, passed by slowly and attentively. I backed only a step before my tanks bumped the sea wall. Twisting around, I noted a rather large crack in the wall into which I hoped to squeeze. My dive buddy had since bolted to the surface.

Not while wearing my twin aluminum 80-cubic-foot air cylinders could I hope to fit. Instinctively, I popped loose the waistband on my tank. With the chest strap also undone I reached back over both shoulders, grabbed ahold of my sturdy manifold, and hoisted my tanks up, over my head, bringing them to rest in front of me. I backed into the crevasse and pulled the tanks in with me. At least I wasn’t out in the open and had tanks between me and the shark.

The bull shark had already made several passes to my front, each time closer and closer in. Barracudas did that same crap, swimming around and around, closing in. I absolutely couldn’t bring myself to remain in the water with the likes of either. I twisted my air pressure gauge around to check my supply. I had well over 2,000 pounds of pressure. That would last nearly an hour at this depth.

With my dive tool (knife) out of its sheath, I frowned hard, considering the likelihood of me doing anything more than merely pissing off the shark with it. It occurred to me that I might be able to chase the beast off with the burning of my rescue flare. As I fumbled with my smoke/flare, the bull rammed its nose against my tanks, then gave them some more thumps.

I felt the proximity of a nearly crowning masonry brick at my anus and feared quite realistically that, before this dive was over, I would have enough of said bricks to construct a to-scale model of the entire Ming Dynasty segment of the Great Wall of China. My air supply went from 2,000 to about two pounds in just two seconds—too fast!

“That Jacques Cousteau can go f*** himself!” I cringed as the bull shark writhed horizontally away from me.

When there was nothing more lurking in the murk, I kicked my way to the surface and immediately announced, “Shark, shark, shark, shark, shark…take my tanks, take ‘em right now, and pull me out—NOW! The boys made short work of snatching me out of the Gulf of Mexico. At a distance in the harbor our support boat raced away with that freshly lifted vessel in tow, just astern. The plan had worked nicely; gravity pulled all the water out of the ass-end of the craft, which now rode nice and proud on the surface like it didn’t have a care in the world.

My loathing for diving never waned from that point. After the shark incident, I went on to have a barracuda strike at me during another dive. It actually wasn’t after me, it had strafed at a shiny object on my dive apparatus. My loathing didn’t wane from that point on. I never got to silk screen that bad-boy T-shirt with “Ain’t Scared of Sharks.” I would always have to rely on the claim of running with scissors to herald my mischievously maverick ways.

All my hates prompt me to look back and wonder why I chose the course I did. I hate diving, hate parachuting, and I’m scared of sharks and barracudas. I’m claustrophobic, scared of heights, and hang on waaay too tight when riding merry-go-rounds. Some times we just get on paths and do things without having a shred of a clue as to why we do them. And that, my friends, is my definition of destiny.

The Longevity of the VZ 58