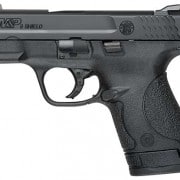 According to Gun Holsters and Gear, Smith & Wesson have given into popular demand. They will be making the M&P shield without the thumb safety. Apparently an all too eager dealer mistakenly leaked this promotional image a little prematurely; which led to discussions of its authenticity. However Gun Holsters and Gear’s sources have confirmed that […]