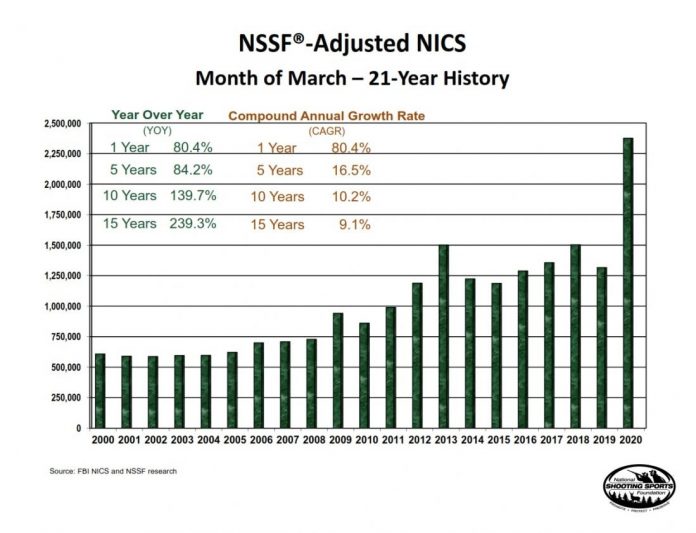 This month was the highest number of NSSF-adjusted NICS checks for the month of March in the past 21 years. (Graphics: NSSF)

Licensed gun dealers in the U.S. saw exponential growth in sales last month as suggested by a huge jump in firearm background checks.

The unadjusted figures of 3,709,562 checks conducted through the Federal Bureau of Investigation’s National Instant Criminal Background Check System in March 2020 is a 42.4% jump from the unadjusted FBI NICS figure of 2,604,927 in March 2019.

However, when the data is adjusted by the National Shooting Sports Foundation by removing figures for gun permit checks and rechecks by states which use NICS for that purpose, the number of checks stands at 2,375,525 which is an increase of 80.4 percent compared to the March 2019 NSSF-adjusted NICS figure of 1,317,114.

“This is overwhelming evidence that Americans value their ability to take responsibility for their own safety in times of uncertainty,” said Mark Oliva, NSSF’s director of public affairs in an email to Guns.com.

Further, last month was the 10th month in a row that the number of adjusted background checks outpaced those of the previous year. Even when compared to the past year, March 2020 was a record month.

“The figures are simply eye-popping. Retailers have been telling us that the overwhelming majority of those buying firearms over the last month have been first-time gun owners,” said Olivia of last month’s data. “This puts to rest America’s thoughts on gun control ideas. Americans across the country chose to exercise their right to lawfully purchase a gun when their safety became more than a rhetorical question.”

It should also be noted that the true number of guns sold across the country is likely higher than what NICS figures suggest. The data does not include private gun sales in most states or cases where a carry permit is used as alternatives to the background check requirements of the 1994 Brady law which allows the transfer of a firearm over the counter by a federal firearms license holder without first performing a NICS check.