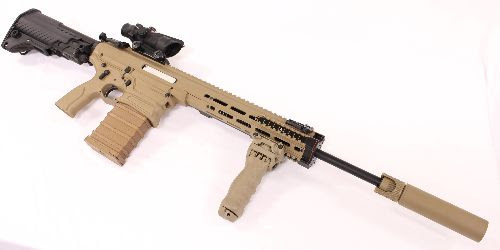 For those of you following the current contracts for US Military smalls arms development, NGSW is not a new acronym.

For those wondering, NGSW stands for Next Generation Squad Weapon. It is a program spurred on by the US Army to replace the M16, M4, and M249 with a pair of weapons that have greater effective range and incorporate the most modern current and near future technology for individual small arms and integrated warfighting.

MARS, Inc and Cobalt Kinetics have teamed up to chase the contract and these are their submissions for the NGSW-R and NGSW-AR.

Here is their announcement:

The Army has been soliciting design and manufacturing firms for a next-generation weapon platform. This NGSW program is expected to produce a replacement for the M16 battle-rifle and SAW machine gun. Along with the request for this all-new weapon, this project demands a new cartridge to be developed alongside and incorporated into these new battle rifles.

The initial call-out for the program seeks to dramatically increase the terminal power and effective distance of the 5.56 NATO and even the 7.62 NATO. The performance of the new cartridge will rival the exterior and terminal ballistics of some current commercial magnum hunting cartridges. It seems a worthwhile endeavor to outfit each soldier with an 8lb rifle that can hit a 1 MOA hardened target, and  penetrate that target up to and exceeding 1000 yards. If that’s not enough to impress, this new weapon will fulfill these requirements without compromising the control and handling characteristics currently accepted in the M16 and SAW light machine gun.

MARS, INC of Montana teamed up with Cobalt Kinetics of Utah early in 2019 to realize this seemingly-impossible task. The brain-trust of MARS approach the modern semi-auto rifle from a fresh perspective while Cobalt Kinetics’ skill and expertise at precision manufacturing made the idea a reality. The resulting weapon presents as an extra-large framed AR-patterned rifle- with a huge magazine well to accommodate the new cartridge. Inside the handguard one can identify a large recoil spring wrapped around the barrel- an essential part of any long-recoil operating system. For those unfamiliar with this type of mechanism, it’s not unlike your grandfather’s Browning Auto-5 shotgun. But make no mistake, this is not your grandfather’s battle rifle. The bolt and barrel, while locked, are allowed to travel freely within the action under the recoil impulse generated by the 6.8mm short magnum cartridge (the guns fire 140gr .270 caliber bullets at 3200FPS). This operating system causes a great deal of recoil energy to be spent and dissipated before the total recoiling mass delivers a blow to the shooter’s shoulder. Similar systems have been employed over the past few decades in some soviet rifle and machine-gun designs. This operation has been labeled as “shifted pulse recoil”. The recoil impulse is effectively distributed over time, while its speed is reduced by a spring and buffer system before the stroke is complete. The result is a slower and softer impulse to the shooter- more to the point- This rifle is as controllable and comfortable to shoot as the old low-impulse 5.56 platform, while doubling the effective distance and energy.

Besides reduced recoil, there are many other advantages of long-recoil semi-auto operation. No gas escapes the barrel into the action- this rifle, with full-auto capability, runs as clean as any bolt action. When operating with a suppressor, the long-recoil system actually runs more reliably and with less recoil that unsuppressed. Of course, the added mass slows down the barrel/bolt assembly but that extra mass and resultant momentum to the recoiling assembly help the system power through dirt and particulate that can foul other semi-auto mechanisms. And the addition of suppressor does not contribute to increases fouling in the action as the system operates so slowly (relative to DI or piston) the propellant gasses and powder-charge fallout have fully evacuated by the time the bolt unlocks and opens to eject and reload the weapon.

MARS and Cobalt have developed 2 versions of the “MARS” rifle. A 13” barreled lightweight carbine and an 18” barreled light machine gun have been supplied to the ARMY for testing and evaluation. Both are fed from proprietary 20 round box or 70 round drum magazines. Both are capable of semi and full-auto fire. The MARS rifles have been designed to incorporate the newest “smart” battlefield tech to keep the soldier connected and adaptable as battlefield tactics become more advanced. These technologies include a central power source to supply all peripheral accessories while tracking and displaying their performance and status. Light, illumination, direction of fire, total rounds fired between service intervals, ammunition supply in the magazine, and operating temperature can be tracked by a central command module on the gun. This information can be communicated to remote command to support the soldier of tomorrow.

Michael Merino, President and CEO of MARS Inc. adds: “I can’t think of a better collaboration in this industry. Our MARS rifle design, coupled with the innovative approach to rifle manufacturing of the Cobalt Kinetics team, has been incredible. We believe that we have a rifle design that meets the requirements of the Army’s ambitious NGSW program. We are excited to be part of evolution of military effectiveness. We also plan to release a commercially available version of this rifle, in the first few months of 2020.”

More information on the MARS rifle can be found at https://www.marsrifle.com/