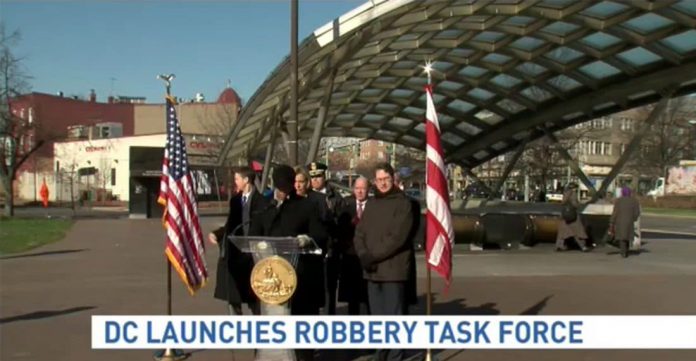 A news crew covering a press conference Wednesday morning on a new Task Force created to reduce robberies in the Washington, D.C., area, returned to their van only to realize someone smashed the window, ransacked the vehicle and stole a cache of expensive equipment.

D.C. Mayor Muriel Bowser and Police Chief Cathy Lanier were among those announcing the new Task Force and apparently in view of the news van, which was parked about 100 feet from where the news conference was being held.

Setting the untimely coincidence aside, the Task Force will aim to identify and respond to patterns of robberies.

“We used to say that violence was neighborhood-based, so it was pretty easy to identify,” Chief Lanier said at a public meeting in October. “About six years ago, the gangs stop forming around neighborhoods and open-market drug dealing. Now, criminal street gangs are organized around armed robberies. They’re involved in a high number of robberies and they don’t just do it in one neighborhood.”