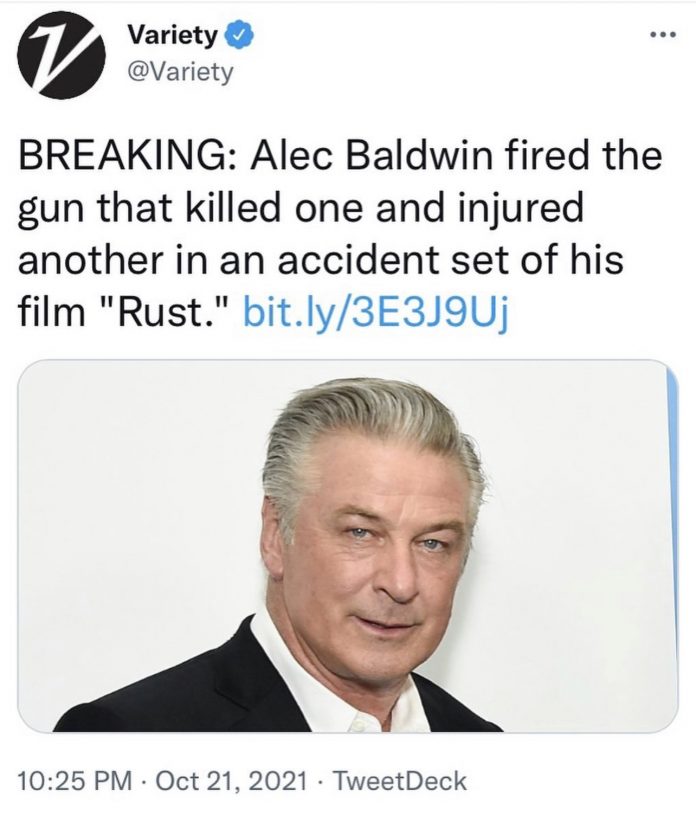 So Alec Baldwin killed a woman.

A little over four years after snarkily wondering aloud via the internet how it would feel to unlawfully kill someone, Alec now knows. Granted as an accident/negligence and not an OIS, but still either negligent homicide or manslaughter.

During either a rehearsal run or filming for the movie “Rust” Baldwin fired a prop-gun and something went wrong. It is not clear what specifically, if the prop failed, if it was loaded improperly, or anything else about the death and injury, but the prop expelled a projectile that killed the cinematographer and injured the director.

UPDATE: Current information is stating that the ‘prop’ firearm was a functional single action revolver with live ammunition inside it. Other sources are reporting that the safety track record on set was so abysmal that staff walked the morning of the negligent discharge because they could not tolerate the conditions on the set of ‘Rust’ any longer. Live ammunition may have been on set for recreational use between takes, this is a TERRIBLE idea.

Somewhere someone failed to take proper account of safe practices and nobody, including Alec Baldwin, was double checking things prior action being called, resulting in death and injury.

Firearms are fun. Firearms are safe when used with care. But firearms, including functioning props, must be handled with respect and maintained for safe function. They must also be used within their prescribed use guidelines. If a steel plate shouldn’t be shot closer than 25 yards there is a reason. If a functioning prop should not be pointed at someone and fired at closer than 5 yards, there is also a reason. If a prop should be cleaned and inspected to be certain a build up or other failure does not induce a dangerous situation there is a reason. If a firearm is being used as a prop and will be pointed at actors or crew members during a shoot live ammunition should not be present, if it must be present it must be strictly controlled and accounted for by an appointed accountable person.

Accidents happen, but this one was avoidable somewhere prior to Baldwin pulling the trigger.