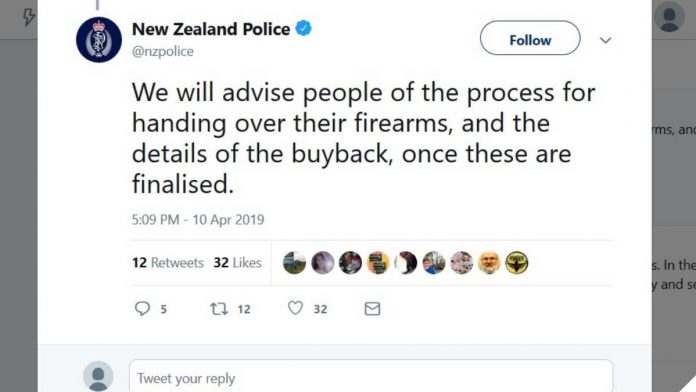 As of last week reports out of New Zealand have the total number of surrendered arms in the country at 700 while the estimate on the number of now prohibited weapons hovers around 300,000.

As of last week, only around 700 weapons had been turned over. There are an estimated 1.5 million guns—with an unknown number subject to the new prohibition on semiautomatic firearms—in the country overall. – Reason.com

The New Zealand government responded in a world watched, perhaps record setting, knee jerk reaction to the horrific Christchurch massacre. Immediately the Prime Minister promised to ban the dangerous assault weapons that plagued the country. They were ‘clearly’ the only reason in all the myriad reasons that the massacre took place and banning them from private hands always works every time with no ill consequence and everyone is safe forever. The End.

If you’ve been under the proverbial (or I suppose literal too) rock and are unaware of the act, the political actions since,and the resultant here is a summary.

A euronationalist, ecofacist, and several other descriptors that led him to being accused of both left and right wing extremism (funny that they damn near seem to be two sides of the same coin eh) named Brenton Harrison Tarrant, 28, killed 51 people and wounded 49 in attacks on two Mosques in Christchurch. He killed them while streaming it live on Facebook and has a published digital manifesto largely hidden in the bowels of the internet explaining why.

In summary, a racist piece of human garbage live streamed his attack for attention. He wanted to trigger a race war in the US to simultaneously stop our “Imperialism” and reinstate segregation or a multi-nation solution, get all non-anglos out of Europe through force, and punish Muslims for daring to be Muslim outside of the Middle East.

Typical extremist rhetoric, demands, changes that must be made, list of grievances, etc. But the attack was carried out in a modernized method of delivery that terrorists previously hadn’t utilized for reach. It targeted millennial tropes like PewDiePie and an old joke with the hands floating around the internet, and took full advantage of live stream video in a first world nation.

The use of technology for dissemination combined with the shock and scope of the carnage triggered several of the effects Tarrant wanted.

New Zealand bans assault weapons quickly and says they would have a scheme to buy them all back. Mandatory confiscation of property by the government from hundreds of thousands for a crime hundreds of thousands of people didn’t commit. After this announcement the New Zealand public, many in support of doing something waited to see how it would shake out.

No actual plan was is place. The government was just going to ‘do something’ because, of course, they must. So they banned the evil “assault weapons” (semi-autos across a wide design spectrum) and promised to buy them back.

Is it a “buy back” if it wasn’t their property in the first place?

Anyway, the general feel of the whole situation is that while New Zealand does not have a 2nd Amendment protecting their natural rights of armament and the citizenry itself is not as culturally invested in its own retained armament as the United States, the citizenry is highly dissatisfied with the law and the proposed methods and amount of compensation for the turned in weapons.

If the New Zealand government had the first hint of a clue they would be offering full retail value for the firearms, without question. Such a scheme would show good faith on the part of the government for fair compensation.

Instead the New Zealand government is going to evaluate every weapon that is turned in, grade it like it would be going up for resale, and make a low percentage offer. A further cheapening of an already cheap move by the government to mandate property forfeiture without the owners committing and being convicted of a crime.

The New Zealand police expected a rate of non-compliance but it seems that the government is hell bent on doing everything in their power to assure that rate is as high as possible. Then they’re pointing to Australia and their buyback and asking why can’t it work just like that?

Well A: because that one didn’t work as well as everyone wants to pretend, and B: because New Zealand saw that it didn’t. To be sure the firearm culture of New Zealand isn’t what it is here, but they know a raw deal when they see one and they know they’re taking the blame for an action not their own.