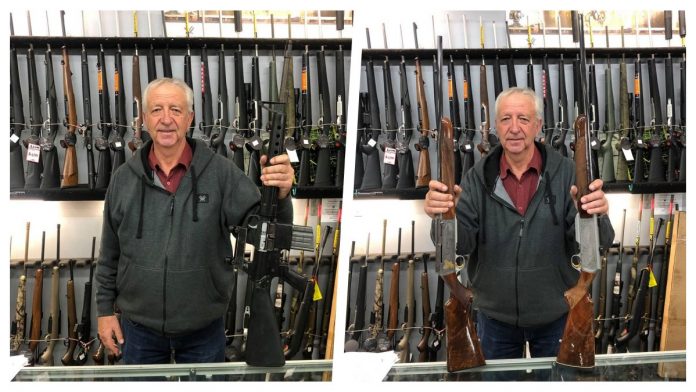 As part of complying with New Zealand’s arbitrary new gun ban on popular sporting rifles, some rare semi-auto gems are headed to the scrap yard.

The country’s government last year banned a sweeping array of legal firearms, including antiques and collectibles, targeting an estimated 170,000 guns in private hands. Owners who did not choose to hand over their often treasured family heirlooms to authorities– at comparatively paltry pre-set prices– faced five years in jail if they did not comply.

Likewise, gun shop owners have had to hand over their inventory that, frozen in place by the new law, could not be sold. Guns cannot even be donated to museums, an outlet that saved many now-outlawed firearms in neighboring Australia.

“Few Collectables being taken by the police to be crushed today,” noted Bronco Outdoors, a firearms retailer in Tauranga, the fifth most populous city of New Zealand. One of the BARs was a 1983-vintage limited edition North American Deer rifle, SN 007 of 600, in .30-06. The FN-made Belgian rifle had a coin-finished French gray receiver and burl furniture along with signed gold inlaid engraving on the receiver. The guns retailed for $3,500 in the U.S. when they were produced almost 40 years ago and typically can go for twice that much at auction today in the States. In New Zealand’s government-mandated “buybacks” last year, the owner of a Browning BAR could have been offered as low as NZ$375 ($246) for the rifle. (Photo: Bronco Outdoors)

The AR-10 is from Armalite’s ultra-coveted licensed production by Dutch small arms maker Artillerie Inrichtingen (A.I.), who produced about half of the original 10,000 rifles before Armalite sold the rights for the guns in 1961. It includes what appears to be an early “waffle” mag, which run about $150 these days by themselves. (Photo: Buffalo Outdoors)

Besides all centerfire semi-auto rifles, the NZ firearm prohibition covers even lever-action, bolt-action, and pump-action rifles if they have a capacity of more than 10 rounds of ammunition, regardless if they are chambered in centerfire or rimfire calibers. This saw many rare old Winchester and Marlin cowboy guns, some dating to the 19th Century, scrapped. When it comes to shotguns, pumps, and semi-autos capable of holding more than five shells are now banned.

In response to the move by the New Zealand national government to ban such a broad category of firearms, U.S. Sen. Dianne Feinstein, D-Calf, applauded Kiwi lawmakers on “a job well done,” following the statement up with “the U.S. should follow suit.”