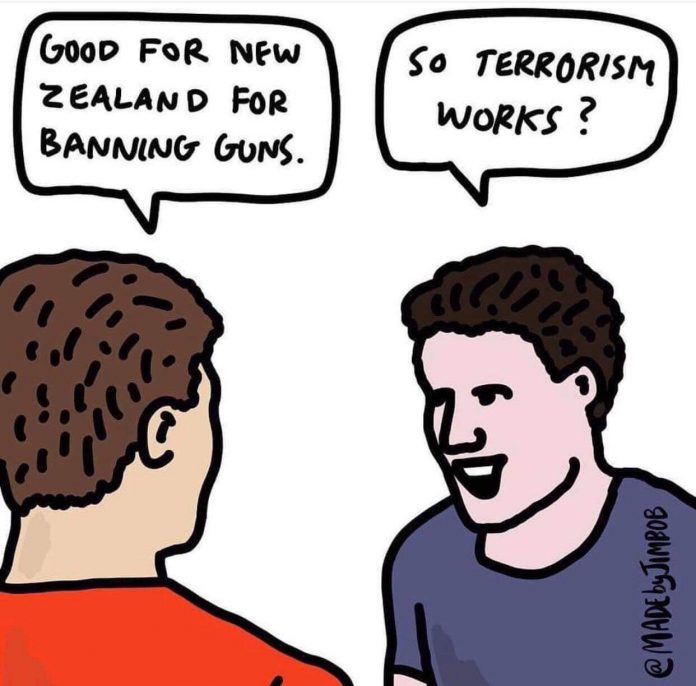 In the wake of the Christchurch terror attack the New Zealand government has take swift and decisive action… exactly like the terrorist wanted them to.

The gun control proponent camp is lauding the NZ government for their efforts to remove assault weapons from the hands of the citizenry. A buy back is slated to begin in April. These efforts are all in a reactionary attempt to keep a motivated extremist from visiting violence upon unarmed (by law) groups of people.

I haven’t seen the terms of the proposed buyback. I haven’t read the definition of semi-automatic assault weapon that they propose to confiscate. I have not heard the penalties for non-compliance or what violence the NZ government intends to do to the people who don’t comply with the new edict but who have committed no other crime.

New Zealand already licences and background checks all their gun owners. Owning a firearm is a privilege given from the New Zealand government. Gun control proponents focus on New Zealand’s “weak points” are that they do not have a universal registrar for guns.

We know registration leads to confiscation. We know registrars are not useful in solving or preventing crime in a meaningful way, Canada stopped there registry because it was a money pit and my own home state of Michigan wants to dump the handgun registry for the same reason.

Making another rule to prevent an individual or group who doesn’t play by your rules not kill people is an asinine concept. It is security theater on a grand scale. Giving up the means and responsibility of your individual protection to state that already proved they cannot shoulder that responsibility. Nor is it their job to.

We cannot socially engineer violence out of the human condition. Assuring that good law abiding people are not armed does will not stop the madman.

To my amusement, in a world spanning act of civil protest the internet servers set up to start registering guns for turn in were crashed by spam posts.

So now New Zealand will have:

It’s still astonishing to me that if the moral, legal, and ethical prohibition against mass murder wasn’t enough to stop somebody… what makes anyone believe a law against owning one, just one, method of completing such an attack will stop it?

The arguments of that center around the “we don’t need to make it easier…” camp of moral projectionism are just that, a projection of the illusion of collective responsibility for an attack. This is why organizations like the NRA are attacked as enablers and are accused of secretly wanting and revelling in this violence.

Saying that this is clearly an error in policy is so much easier than admitting that one person, or a very small group, can and will always be capable of extreme carnage against soft targets. This admission would deprive the state of its quasi-monopoly on the use of force. Admitting they can’t protect you and that breaking their rules can only result in a criminal case against you, not magically stop the loss of life because it is both wrong and against the law.

This is why we need the Second Amendment.

I notice that not one article on this subject I read today mentioned that the reason we couldn’t make such sweeping knee jerk reactionary changes here in the U.S. was the Constitution. No it was the usual litany of clingers and the NRA, not the fact that it is a constitutionally enshrined right.

3. You are your own best resource to SAVE WHO NEEDS TO BE SAVED.  Nobody wants to save your life more than you, so set yourself up for success by having the simple tools and knowledge to do so: do what you can with what you have.  Recognize that nobody is in a better position to start saving your life than you.

4. Sometimes saving lives means you have to KILL WHO NEEDS TO BE KILLED.  It has been almost 15 years since I first wrote “the more effective you are at taking a life, the more successful you’ll be at saving one” and nothing in the intervening time has changed my mind.  Be swift, be decisive, be final.

5. Mostly, ALWAYS BE WORKING.  There is always something you can be doing to improve your position.  Always.  Because nobody is coming to save you.