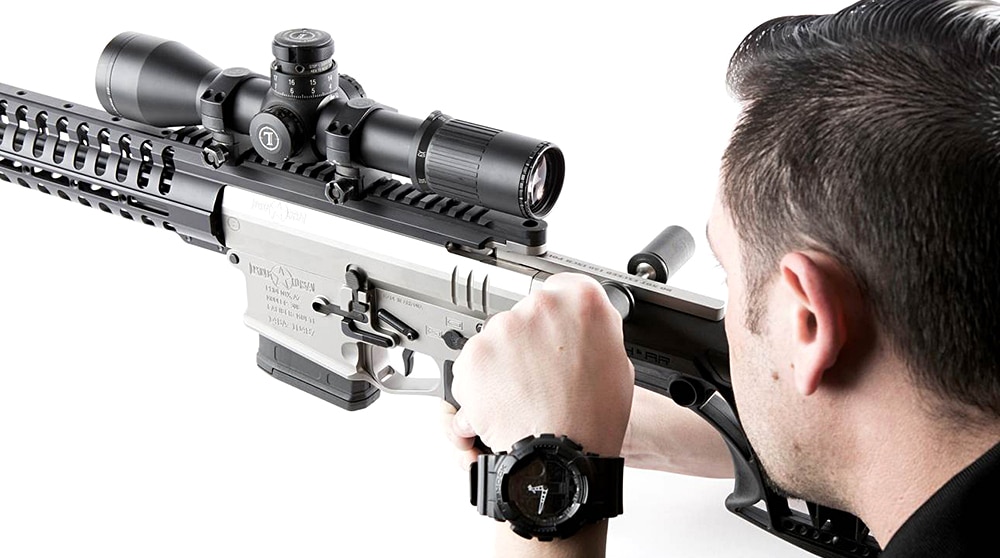 The Patriot Ordnance Factory launched two new AR-style rifles with straight pull actions that are legal in “all 13 original Colonies.” The company is known for its high-end rifles and the ReVolt series delivers with leading-edge hardware and top-shelf components.

Both rifles bear the ReVolt name and are built on the same parts and designs that have set POF rifles apart in the AR business, only with a manually-cycled action. This is a departure for the company that normally specializes in gas piston actions.

ReVolt rifles will be offered in a “Light” .223 Remington/5.56 NATO model and a “Heavy” .308 Winchester/7.62 NATO gun to satisfy a wide range of shooters looking to take advantage of the AR design no matter what their shooting needs happen to be.

The rifles are patterned off POF’s ambidextrous Gen 4 design only fit with an oversized, easy-to-use straight pull charging handle. The charging handle can be disassembled and used as a driver for scopes and rail accessories.

All ReVolt rifles will be built around longer 18.5-inch fluted barrels with a nitride finish and toothed 3-chamber muzzle brakes. Nitride treatments are becoming the new standard for extending an ARs lifespan and improving accuracy, when compared to stainless steel and chrome-lined barrels. POF uses polygonal 5R rifling for accuracy and muzzle velocity.

The barrel also uses POF’s enhanced E2 chamber. It’s a fluted chamber that channels a small amount of gas around the neck and shoulder of the cartridge to assist with extraction. The push-pull extraction system reduces wear on the extractor and ensures longer life of the critical part.

Cladding the barrel is a free-floating 14.5-inch handguard. The handguard has a raised receiver extension that clamps onto the flattop rail for a continuous optics mounting platform. This type of mount is guaranteed to be more accurate than a two-piece rail when it comes to directly-mounted magnified optics.

The handguard sports a small forward rail for shooters who prefer iron sights and features the latest M-Lok modular accessory mounting system by Magpul. The ReVolt is a totally tactical traditional rifle, complete with a Magpul pistol grip and Luth-AR adjustable target buttstock.

ReVolt rifles use the same 7075-T6 alloy aluminum machined billet receivers as other POF rifles minus the forward assist to make room for the charging handle. The receivers and bolt carrier group have slick NP3 nickel plating for maximum reliability.

The rifles use POF’s light 4.5-pound trigger system and use KNS anti-rotation pins to ensure that every trigger pull is the same every time.

To make the rifle compatible with laws in all 50 states the upper uses a captured front takedown pin. The pin lets the upper rotate from the lower for maintenance while preventing taking the upper off without tools. This simple change is key to making the rifle compliant.

POF-USA will be selling the complete upper for the Light rifle separately along with a 10-round Magpul magazine and the captured takedown pin for use with standard MIL-SPEC lowers for users in states where previously-legal semi-auto AR-15 uppers have been recently banned.

The rifles have a certain appeal for target shooters and hunters as well, where manually-operated guns are preferred and in some cases, required for sporting purposes. With the ReVolt rifles, competitors and stalkers everywhere can use AR-style rifles if they choose to.

Without the short-stroke gas piston system these rifles cost a little less than standard POF rifles, not more just to take advantage of markets short on options. The ReVolt Light has an MSRP of $2,229, the Heavy $2,949 and the standalone upper is $1,399. Real-world prices are expected to be lower by a significant margin.

If you have been longing for a high-end, high-quality AR rifle but have the unfortunate geography to be denied that right, POF-USA has you covered. For more information visit the POF-USA website or call (623) 561-9572.