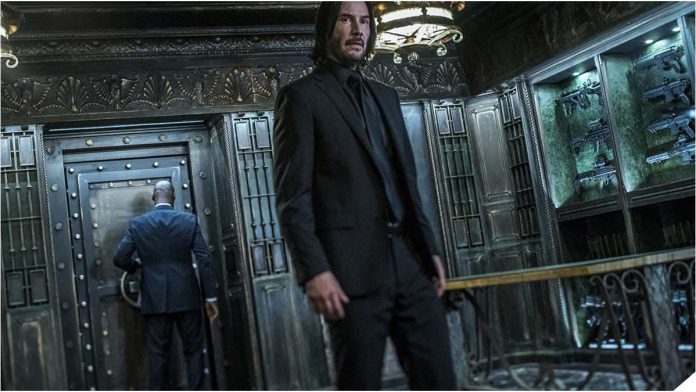 If you are a fan of really nice 3 Gun setups, the new John Wick: Chapter 3 – Parabellum preview is must-watch material.

Released by Lionsgate this week, the trailer has super-gun-fu ninja John Wick (Keanu Reeves) returning to the big screen. With a $14 million price tag on his head, he has the franchise’s standard horde of well-dressed bounty-hunters killers hot on his trail.

Of course, though, the plot takes a sideline as Wick — joined by the original Colt Python fan Laurence Fishburne— drops a callback to the now 20-year-old “Guns, Lots of Guns” scene from the Matrix (also released through Lionsgate).

You remember that scene, right?

The new Wick trailer highlights other great stuff like a knife fight in a knife museum, Halle Berry with a threaded barreled SIG P365 vs. a bulletproof suit, a goon squad with HK MP5s keeping it old school, and the pit-bull packing Wick Actual showing off lots of Taran Tactical stuff to include a STI 2011 Combat Master, tricked out SIG MPX carbine with jungle mags, and a Benelli M2 Super 90 with a John Holmes-length magazine extension.

JW3 is set to release May 17 but to help fill in the time until then, the Guns.com crew visited with Taran Tactical to get the scoop on the long-slide worthy of Mr. Wick, below.