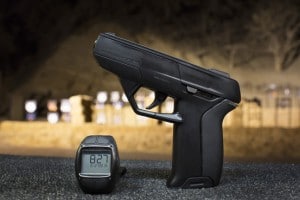 The New Jersey Attorney General’s office recently decided that the Armatix “smart gun” does not meet the state’s personalized handgun law passed in 2002.

The Brady Campaign to Prevent Gun Violence filed a suit in May calling on acting Attorney General John Hoffman to comply with the smart gun law and release a report on the availability of personalized handguns across the country.

Hoffman’s determination — pointedly, there are none.

Personalized handguns can only be fired by “an authorized or recognized user,” according to the law.

The Armatix’s iP1 pistol came close, but the attorney general’s office decided it cannot legally be considered a personalized handgun because “as a matter of design, the pistol may be fired by a person who is not an authorized or recognized user. That is, as long as the pistol is situated within 10 inches of the enabling wristwatch, it may be fired by anyone – the authorized user or any other person who is able to pull the trigger.”

The German-made iP1 cannot be fired without being in range of a radio frequency identification watch worn on the shooter’s wrist. There is a PIN system to lock the firearm, Hoffman’s office wrote, but once unlocked, the gun can still be fired by anyone as long as they’re within close proximity of the watch.

Once personalized handguns are available in any other state for retail purposes, New Jersey can only sell those types of firearms, according to state law.

Armatix and firearms dealers in California and Maryland who decided to carry the smart gun have drawn fire from gun rights advocates who argue legitimizing the iP1 would only work to weaken their Second Amendment rights by limiting the types of guns they can purchase.

“Manufacturers should be free to sell to consumers the products that meet their needs, and they want to purchase. If there is consumer demand for such a product the market will work. The state of New Jersey has no business making that choice for its citizens,” Lawrence Keane, senior vice president and general counsel for the National Shooting Sports Foundation, told Guns.com in May. “The Second Amendment doesn’t say citizens have the ‘right to keep and bear only the arms the state government says they will be permitted to buy.’”

The Brady Campaign could not be reached for comment.