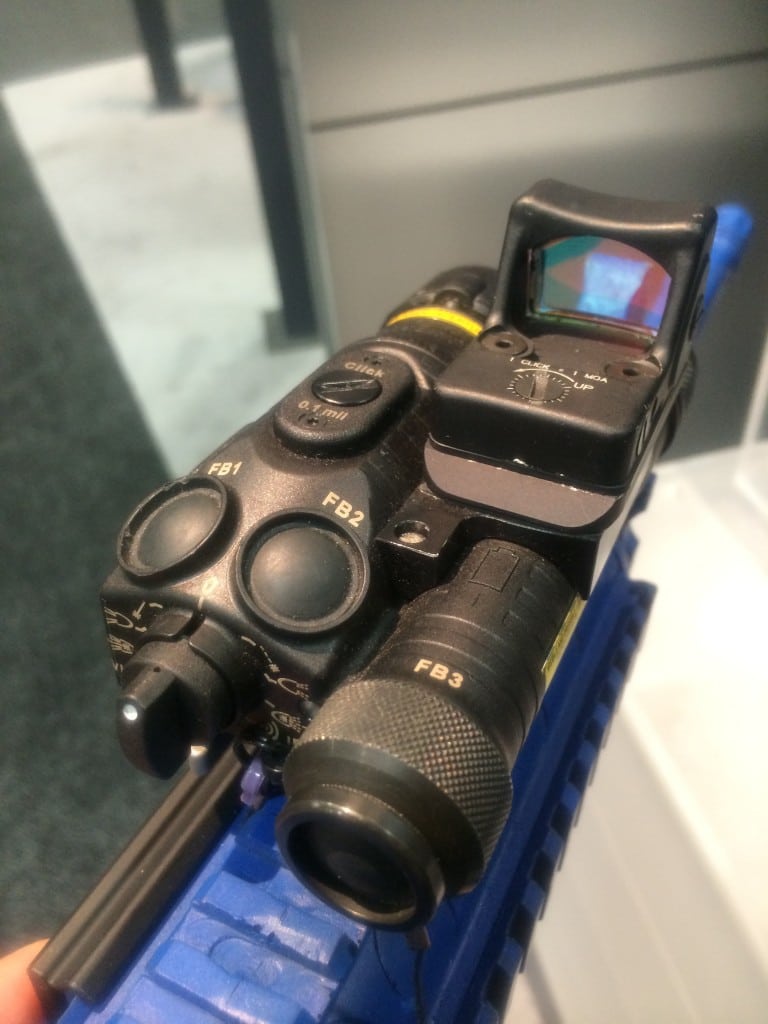 Walking around the recent AUSA show held in Washington D.C., we stopped by Rheinmetall Defence. They had some interesting new laser modules on display. For those of you familiar with the current U.S. issue lasers like the AN/PEQ-15 and AN/PEQ-16A are probably aware that despite their effectiveness as a force multiplier, there are a few shortcomings with the design. One such pitfall is the terrible white light on the PEQ-16, with a less than satisfactory lumen output and overall runtime. They are also pretty bulky, so much so that many users feel a smaller unit (*snicker* we said unit) would also be more beneficial, rather than another one of equal or greater size with the addition of more “features”. The German based Rheinmetall has their own take on what they think integrated laser targeting and illumination systems should be. One such example is their “Laser Light Module Vario-Ray” 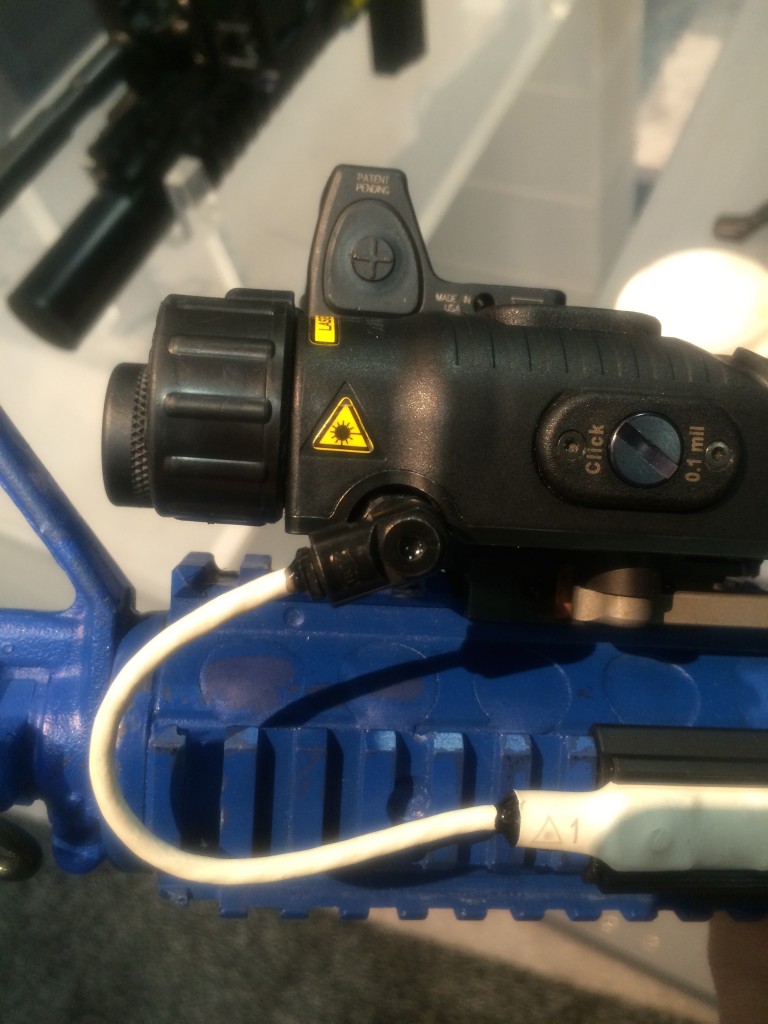 The unit is full of features, to include an adjustable tactical LED white light which a maximum of 180 lumens of output. The system runs on the usual CR123 lithium batteries, and only weighs a hair over 8 ounces. Speaking with their American representative, we were told that the system has an impressive max run time of up to 20 hours, depending on usage and environmental considerations. (Note – this is what they advised us, we have not played with one.) 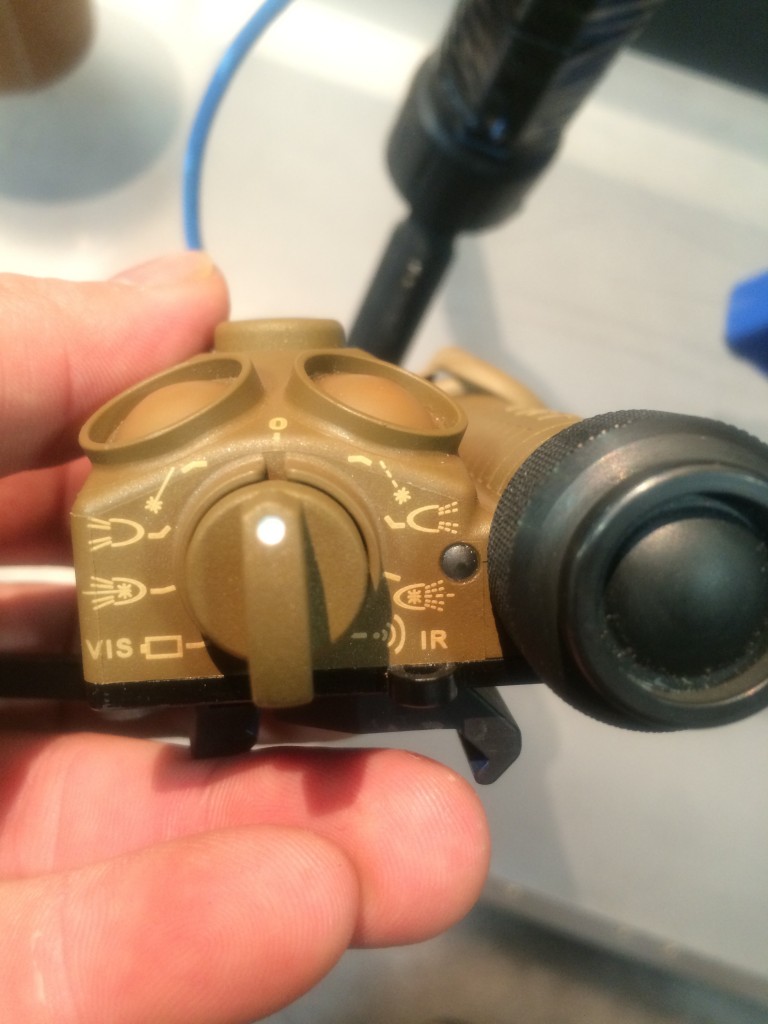 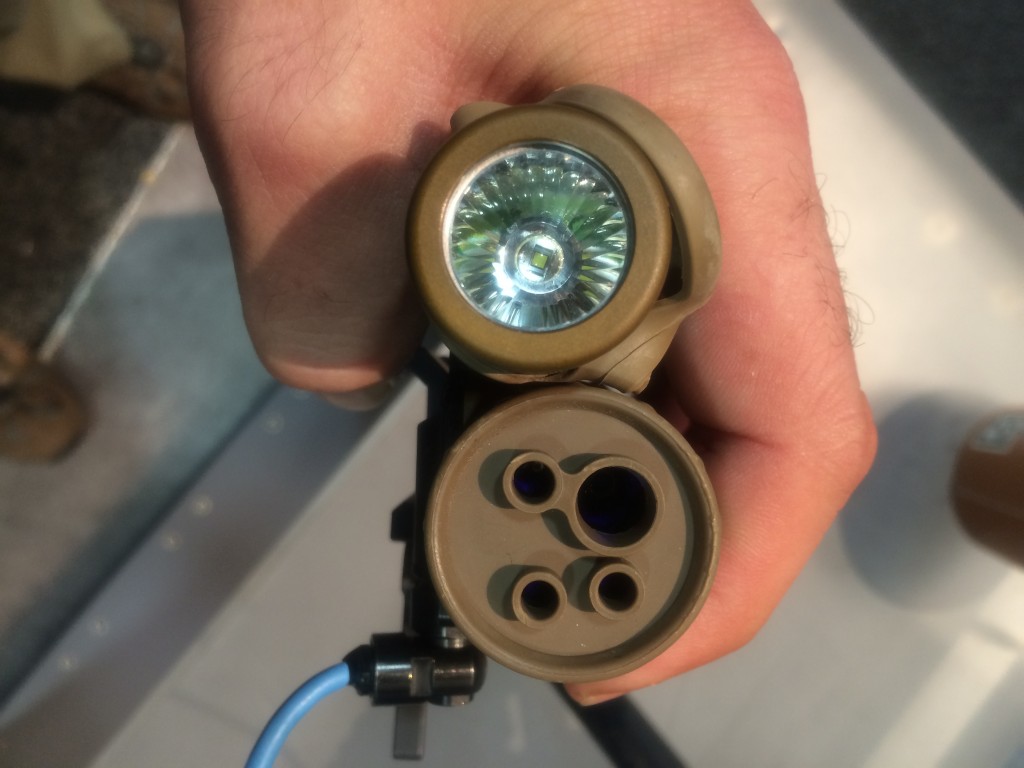 The laser and illuminator modes are controlled by a central 9 position switch at the back of the unit. The white light and lasers can be controlled via three independent “fire” buttons, or with the use of a series of pressure pads. This feature is interesting, as the proprietary pressure pad cables control the power of the lasers. For training, a white or blue colored cable can be used to limit the output so that it remains eye-safe for others that might be flagged by the laser beam. For higher output and combat, a black or grey color coded cable gives more output, and greater range.

On the PEQ series currently issued, there is a blue safety screw which has to be removed for higher, non eye safe laser modes. This is a less than ideal solution, and is hard to monitor in training situations. The mode selector will allow you to choose a series of options, to include the white light, visible red light laser (with a range of up to 80 meter in the daylight, or 1,000 meters at night), IR laser (with max range of 2,000 meters), electronically focusable infrared illuminator, and optional 600 meter “friend/foe” laser. This last setting will trigger a LED indicator on the back of the unit, when sweeping special reflectors worn by friendly forces. All the lasers are “slaved” for easy field zeroing, and can use “filter” type shape generators to distinguish who’s beam is who’s in a team. This can be very helpful in MOUT situations and useful for coordinating fire or marking targets. 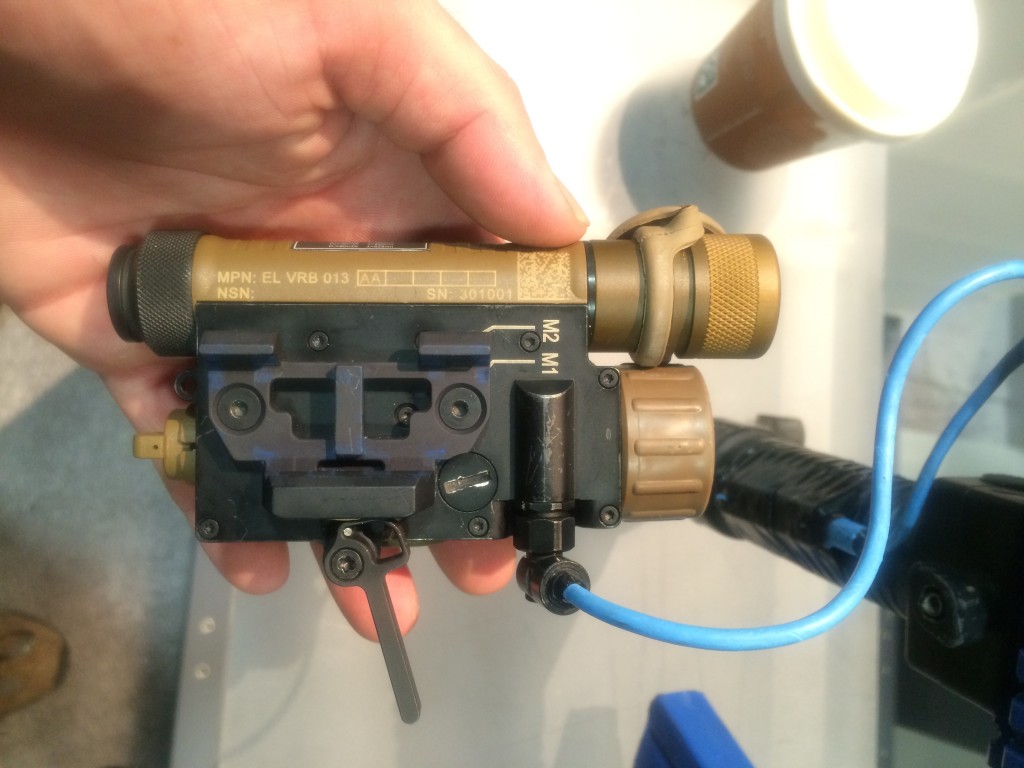 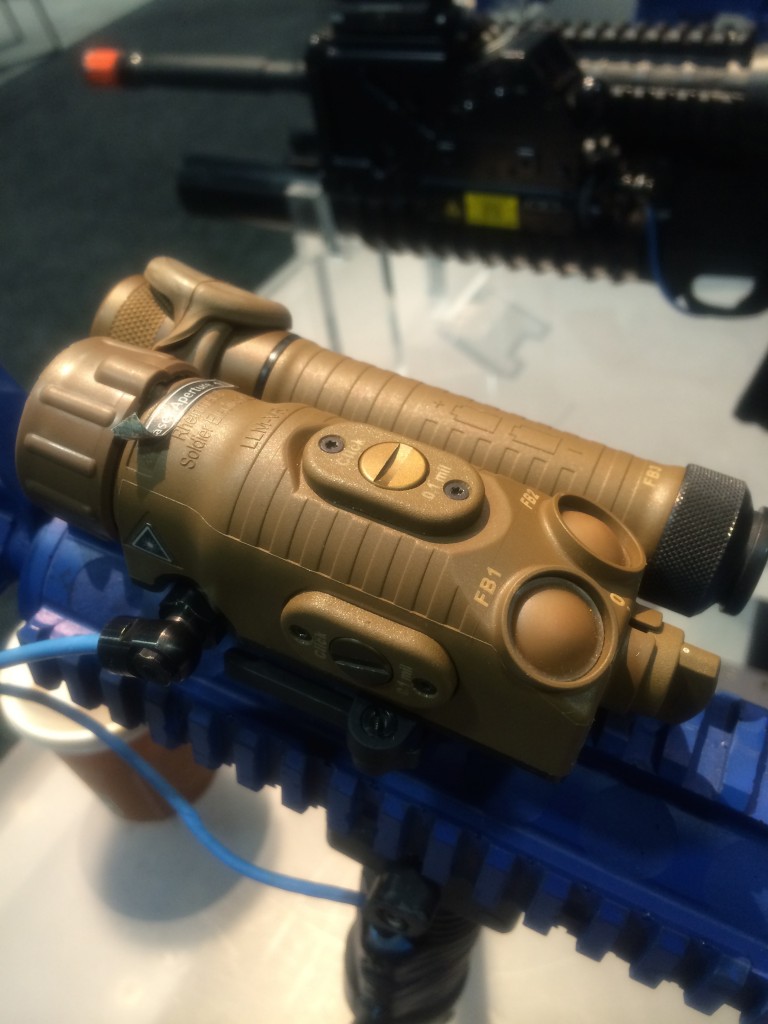 The Laser Light Module Viro-Ray from Rheinmetall Defense also has the unique ability of a movable, quick detach picatinny  base. If you want your lasers center-line with the weapon’s bore, you set the base to allow this. If you are using the unit on a weapon with a laser obscuring front sight (such as the M16 style front) you can shift the mount to provide offset so the beam can clear it. An additional feature that can added is a mini red dot optical sight, such as the Trijicon RMR. This will allow the system to be used as a complete, stand alone system, or positioned in such a way that the red dot becomes a secondary, back-up or offset means of aiming when used with another Primary optic. 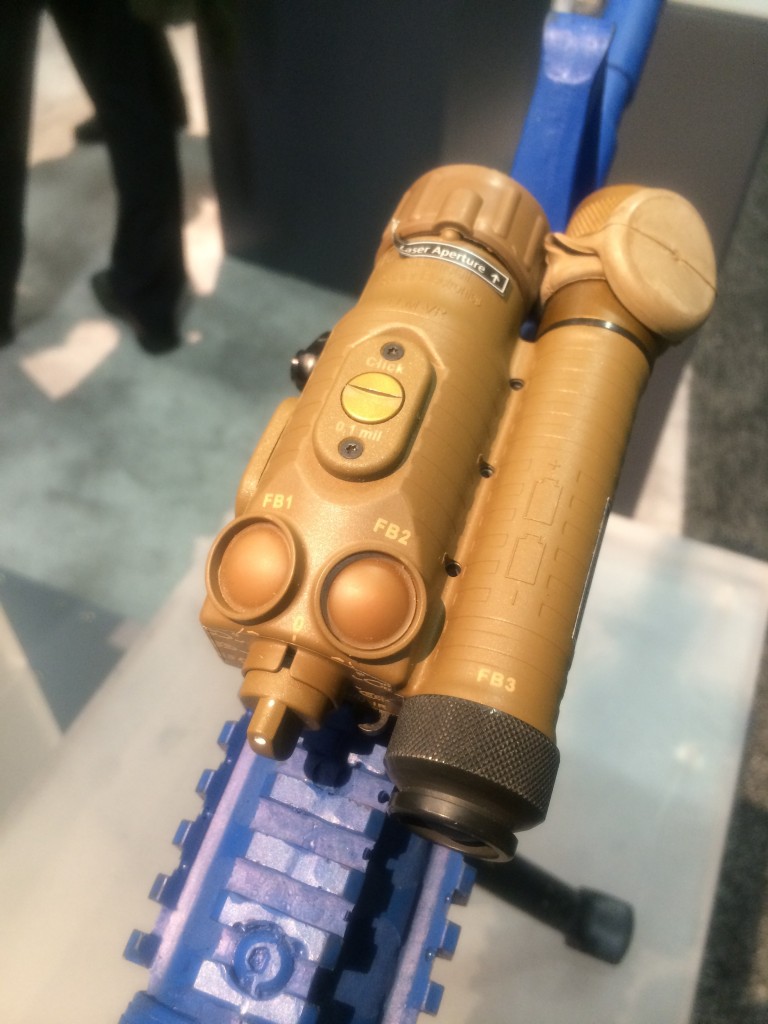 With a wide range of practical, customizable settings and intuitive layout, this is one interesting laser unit. For our military, this unit could offer solutions that the current issue does not. You can check out their range of optics here. We will be watching for further advances in this style of laser illuminator. 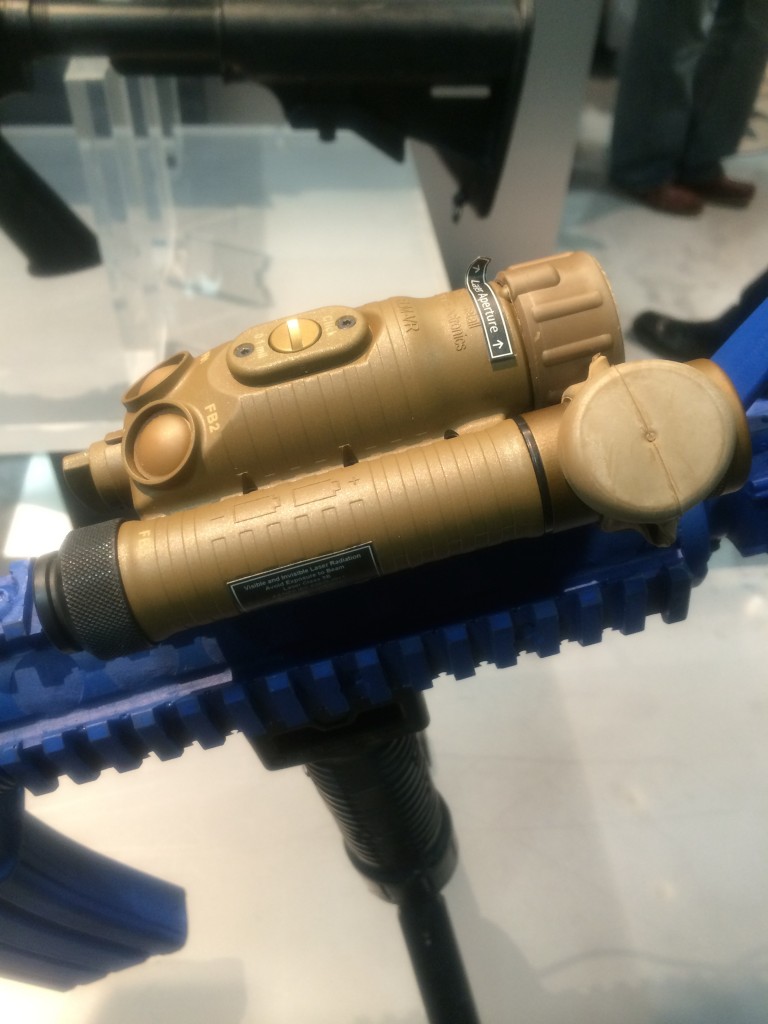