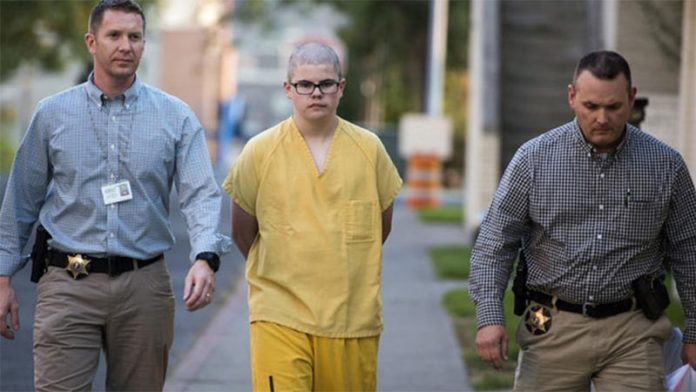 As the suspected gunman makes his way through the legal system, authorities have released additional details about the shooting at a rural high school in Washington state that left one person dead and three others injured.

According to a statement by the Spokane County Sheriff’s Office, the 15-year-old suspect — identified as Caleb Sharpe — faces one count of first-degree murder and three counts of attempted murder. Sharpe is currently being held without bond at the Spokane County Juvenile Detention Center.

The sheriff’s office released a probable cause statement detailing the incident as it was carried out last week. The statement says Sharpe brought a large duffel bag onto the school bus Wednesday morning that contained an AR-style rifle and multiple boxes of ammo. Sharpe also had a handgun tucked inside his coat.

Upon arriving at Freeman High School in Rockford, about 20 miles south of Spokane, Sharpe went to the second floor of the building and pulled the rifle from the bag. As he loaded, another student, Sam Strahan, 15, approached Sharpe and said something along the lines of “I always knew you were going to shoot up the school.”

In response, Sharpe drew the handgun and shot Strahan in the stomach, causing him to hunch over. At that point, Sharpe fired a second shot that struck Strahan in the head. Sharpe then started firing indiscriminately down the hallway, striking three more students, who were injured but are all expected to recover.

As chaos erupted inside the school, the school’s janitor, Joe Bowen, approached Sharpe and told him to surrender and lay on the ground, which Sharpe complied. Bowen stood over Sharpe until a school resource officer arrived a short time later and placed him in custody.

Sharpe, who had attended Freeman High School for the last two years, admitted to authorities during an interview that he had previously been bullied by Strahan and other students at the school, but he said he did not target Strahan specifically. In fact, Sharpe said he had no intended targets; He only wanted “to teach everyone a lesson about what happens when you bully others.”

Sharpe said he got the guns from his father’s gun safe. He also left a suicide note on the kitchen counter of his home, which was found – and reported – by his mother. Authorities say the note was written about a week ago, but they are still working to determine when Sharpe, who has been seeing the school counselor over suicidal ideations, planned the shooting.

Last week, Spokane County Sheriff Ozzie Knezovich blamed a host of outside influences for the shooting, putting emphasis on a culture and media that glorifies violence.

“We now have a 15-year-old in juvenile (detention) who will be going in front of a judge and it’s our intention to try him as an adult for pre-mediated murder,” Knezovich said. “Because this young gentleman got sucked into a counter culture of violence. A culture that is enamored with school shooting.”