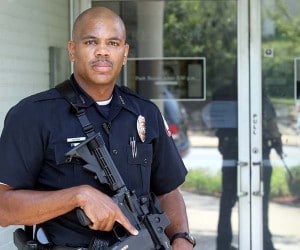 I am sharing this article to show the absolute stupidity in California.

What other issues do you find with this report?

A plan for Compton School Police to carry AR-15 semi-automatic rifles such as this Little Rock police officer is drawing the ire of the NAACP. (Photo: Stephen B. Thornton)

Within weeks of giving its blessing for trained campus police to use personal rifles for patrol, the Compton Unified Board of Education is taking fire from community groups and the NAACP.

The change in policy came in July when the board voted to allow officers of the Compton Unified School Police to carry AR-15 rifles while on duty. Agency leaders explained to the board that the guns were needed to address concerns of terrorism, potential mass shootings, and fears of gunmen wearing body armor.

Now, with the go-ahead given and school returning to session, civil rights organizations are protesting the decision.

“Compton schools are not located in Beirut, Gaza, or Kabul,” said Paulette Simpson-Gipson, president of the Compton chapter of the NAACP in a statement. “They are located in the heart of a hard-working, proud community in Los Angeles County.”

As outlined in the 9-page policy for Urban Patrol Rifles adopted by the board, the semi-automatic AR-15 rifles would be privately owned rifles used by specially selected CUSP officers with at least three years of experience with the department. Once selected, officers would receive 16 hours of training and be required to qualify with their approved rifle quarterly. Those who fail or miss mandated training or qualifications will be removed from the program. Typically, the guns would be secured in the trunks of patrol cars, in a locked case, and without a round in the chamber in the absence of a threat.

“Only those situations where the circumstances at hand are beyond the capabilities of the standard patrol sidearms (e.g., Long distances, suspects utilizing body armor, and/or high powered, high capacity weapons) should be considered for UPR deployment. Whenever possible, UPR officers will obtain approval from a supervisor prior to deploying the UPR,” reads the policy on deployment of these guns.

While California has long had a ban on guns classified as assault weapons, state law permits police officers to buy certain handguns, high-capacity magazines and assault rifles that are not available to the public provided they show their credentials, register the firearm with the Justice Department, and have permission from their police chiefs. According to 2012 Department of Justice figures of police purchase exempted assault weapons, some 7,600 were owned by the Golden State’s 87,000 peace officers.

“This is not an assault rifle; it’s a tool,” Joe Grubbs, president of the California Association of School Resource Officers said in response to the Compton issue. Grubbs explained that arming school police who protect campuses with patrol rifles is becoming more common.

As noted by the Atlantic, five other area school districts including the Los Angeles Unified School District currently allow the use of such patrol rifles by campus police.

Simpson-Gipson, meanwhile, vows to keep fighting against AR-15s in Compton schools, saying, “We won’t be satisfied until this decision is abrogated.”