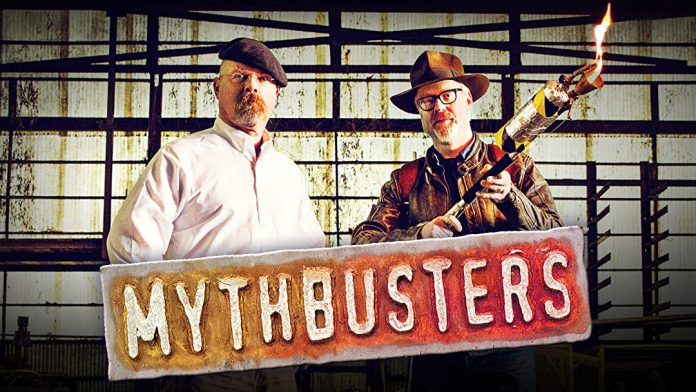 I was a huge fan of Mythbusters as a kid. In fact, it was one of those shows my whole family enjoyed. I remember some gun episodes here and there, and recently I was looking to debunk the .50 BMG can kill you just by passing by you myth and stumbled across the episode where Mythubuysters debunked it. That made me think, what other episodes on guns did the Mythbusters do? That might be a fun article to write.

Holy crap, they did over two dozen featuring various firearms myths. I planned to list them all, but that’s just too many. So I went through and found the episodes that debunked some of the more common gun myths and did away with the more esoteric myths. I ditched episodes that tried to see if a sword could cut through a hot machine gun barrel to be a bit more grounded in my selections.

One story to come out of World War 1 was that troops armed with hunting shotguns, specifically bird guns, were called to the front to knock grenades out of the air and even redirect them to the enemy. This myth became popular enough to make it into a few video games, but I’ve never seen it confirmed. The MythBusters teamed up a pro trap shooters and learned the ins and outs of hitting moving targets. 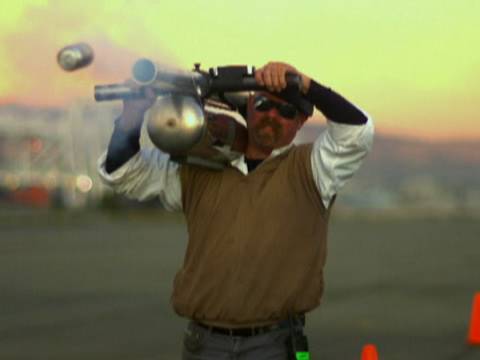 It turns out it’s possible, and the myth got a plausible score. They used a handgun, rifle, and pistol with grenades to show that each could hit the grenade and either cause it to explode or even disarm it in the case of the shotgun.

This episode is not so much about debunking a myth, but the Mythbusters test a variety of handgun stances and techniques to see if one is more efficient than the other. Adam and Jamie arm up with a Colt Gold Cup National Match gun to test these theories.

The Stances they try are:

Predictably the only two that worked were Weaver and single-hand shooting. Gangster style scored the lowest. This is unsurprising by anyone who has ever fired a weapon, but it was nice to see confirmed.

A common movie myth states that a good guy can shoot the gun out of a bad guy’s hand without causing harm. I like the idea that somehow it’s possible, although impossible, with human skill levels. I don’t have to wonder because the Mythbusters busted it. 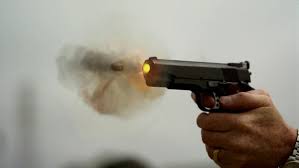 Adam and Jamie didn’t necessarily test the idea’s accuracy, but if a bullet’s kinetic force can knock it out of your hand. They tried three different positions, draw, shootout, and hostage, and in most of the situations, the simulated kinetic energy didn’t knock the gun out of their hands. They also figured that shrapnel and accuracy issues would make it essentially impossible.

While the episode’s title sounds odd, a segment is dedicated to the Russian SKS and its pesky floating firing pin. The Mythbusters looked at a myth from Russia where Russian gangsters would drive around listening to loud music, and the vibration of their car stereos would cause the weapon to discharge due to its free-floating firing pin. This myth was busted, and they couldn’t cause the gun to fire with noise.

However, the next test saw the SKS being hit with the shockwave of an explosion. They placed several SKS rifles around a bomb and lit it off. One of the guns fired, making the myth plausible. It just needs a very strong shockwave.

The Mythbusters decided to see what was bulletproof. Actually, the fans did, and Jamie and Adam took out eight items and shot them to figure out what could stop a bullet. The Mythbusters broke out the arsenal for this one, including a Glock 22, a SIG p239, an AK, an AR, and an 870. 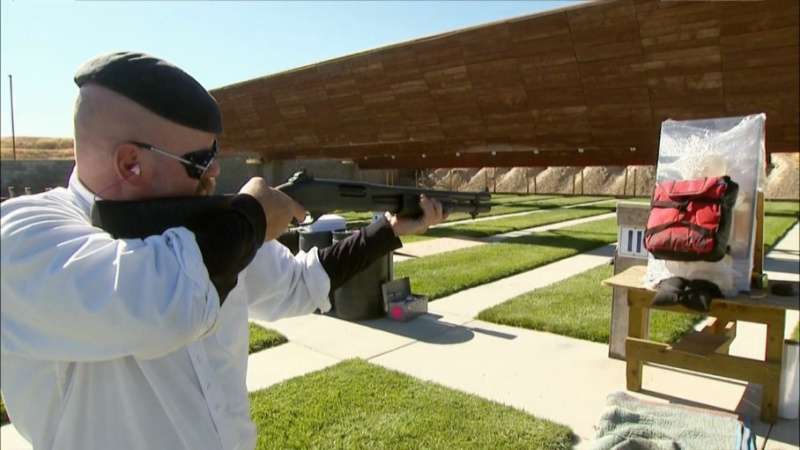 They went out and shot the following to see if it’s bulletproof.

A Police Badge – Plausible when made from nickel
An iPod – Busted by an AK
3 Pizzas in Boxes in a Warming Bag – Plausible with birdshot from a shotgun.
Human Fat – Busted, and they used 16 inches of human-temp cow fat
Human Muscle – Busted using 14 inches of cow muscle
Cornstarch and Water – Busted after being shot with the Glock 22
Bathroom Tiles – Plausible with handguns and buckshot, but not slugs or 5.56
Belt Buckle – Plausible/Busted. The bullet penetrated each time, but they did have a police officer who had been shot in the belt buckle say the bullet went through the buckle but only bruised him.

This episode works to debunk a ton of gun myths, and I can’t dive into all of them. Although the notable tests are how far a bullet can travel through water, can a bullet cause explosive decompression in a plane, and can a MAC-10 fire as it falls downstairs? 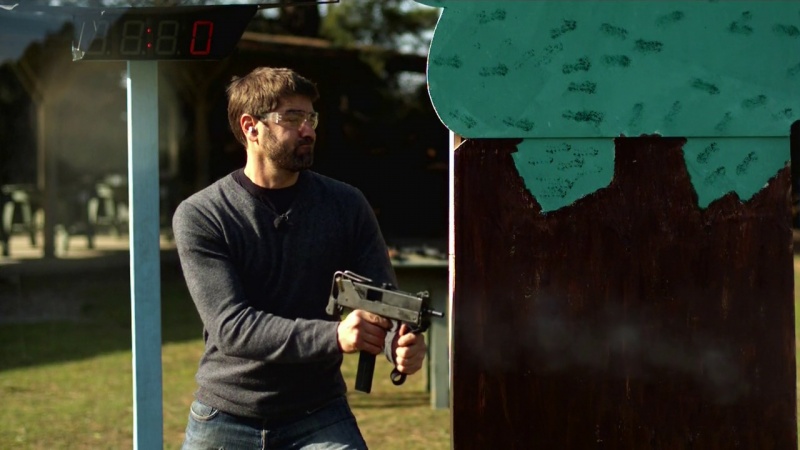 This is one of the best Mythbusters episodes, period, and it is probably their ultimate gun episode. It’s certainly worth a watch, and a few results surprised me.

You get six out of dozens of Mythbuster episodes where guns starred in the myths being busted. Still, that is only a fraction of the myths involving guns. I forgot how fun the show is, and it’s worth a watch even now in 2022. Some of the myths won’t surprise you, but others might. Check it out, and you might learn a thing or two.