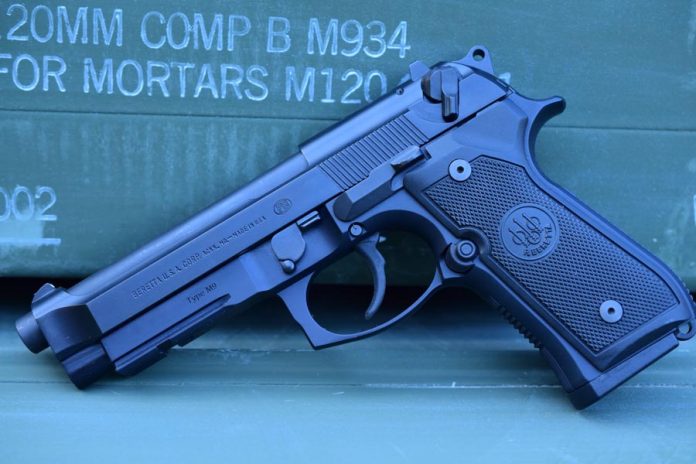 In 1985 the military chose to go with the Beretta 92F as the new service pistol, going away from the 1911 in .45 ACP.  The high capacity Beretta mag holds 15 (plus one in the chamber), which is good.  The only time too much ammo is bad is when your swimming or on fire.  However, some say that the 9mm isn’t strong enough and opt for a .45 ACP.  Caliber aside, let’s talk strictly function and tactics.

I loved carrying the Beretta because of it’s size and the amount of ammo I could carry, but that’s about all.  I have pretty big hands, so the gun seemed to be a part of me—a natural extension of my arm.  That was years ago, of course.

Today, frankly, I think it’s a good idea that the Army is going away from the Beretta.  For one thing, the gun simply doesn’t fit the hand of a lot of service members.  Going with something that can fit more hands is good, especially with all the females in the service, who typically have smaller hands.

Since the military needs to make everything an acronym, they decided to make up the MHS acronym (Modular Handgun System).  In the next go round, the Army’s going to go with a MHS.  Really, that’s just saying they’ll likely go with a gun that has the option to make a grip larger or smaller (read, interchangeable grip).

Regardless, there are more problems than size issues with the Beretta.

The safety/decock lever on the Beretta causes serious problems for the gunfighter.  Many military unit supervisors like their troops to keep the weapon on safe, but drawing and manipulating an external safety under stress takes a lot of practice.  That is, if they can even do it with their dominant hand.

Remember, those with small hands would have to manipulate that safety with their support hand, meaning they couldn’t take the weapon off of safe until they got a two-handed grip.  Talk about lag time.  Waiting that long could get them killed.  Especially if they can’t get to a two-handed grip because they’re other hand is occupied striking someone in the face or holding an unslung weapon.

Unfortunately, the military mandated that the weapon stated on “safe” when holstered or at any other time besides shooting.  So, keeping the gun on “fire” simply hasn’t been an option for many troops.  Talk about a tactical inconvenience!

Again, drawing and putting the gun into a “fire” position by manipulating the safety lever takes a lot of time and practice.  To create muscle memory means thousands of draw strokes.  Unfortunately, a lot of mandatory training on suicide prevention, domestic violence and sexual assault prevention, and all the other warfighting tasks, precludes troops from getting a lot of training with a secondary weapon like a pistol.

Additionally, having a safety on top of the slide means that when performing malfunction drills, or when manipulating the slide during a reload,  shooters might accidentally put the weapon in “safe” mode.  That’d be bad in the middle of a gunfight.  To avoid that, shooters should use the sling shot method, but that’s old school and doesn’t account for gross motor skill usage.  The sling shot method is not the best practice when fighting under major stress.

The DA/SA feature is okay, but not ideal.  The first round is a longer trigger pull, which has a tendency to make shooters miss because of early anticipation.

Moreover, some may try to decock by holding back the hammer and depressing the trigger while lowering the hammer.

Improperly decocking in this way usually overrides internal safety designs.  In other words, if the gun fell and slammed on the trigger after an override like this, the gun could go BANG!  When considering all the things that could happen to troops in the field, it’s not a far stretch to imagine that this could happen.  In short, it’s never a good idea to lower the hammer when a decocking lever is available.  But, then again, when training is cut short, bad things happen; and as mentioned, training with secondary weapons is usually cut short.

It should be noted that the military purchased several Sig Sauer P229s as well in 1985. They called it the M11, and it’s a great gun.  The DA/SA Sig is robust and operates great.  The nice thing about the Sig is it doesn’t have any external safety to manipulate or get in the way.  Bravo!  That’s great.  When it comes to tactics and winning gunfights, the less cognitive functioning that has to be done, the better because under stress, cognitive function fails.

The P229 is the mid-size version of the P226.  Personally, knowing what I know now, if I was headed back to 1985, I would have suggested the Army go with the P226 instead of the Beretta.  I think that would have saved a lot of headache and hassle.  But still, more than anything, the troops simply need more time on the range and more weapons handling.  Again, when it comes to secondary weapons, time is limited and that’s unfortunate for the warfighter.