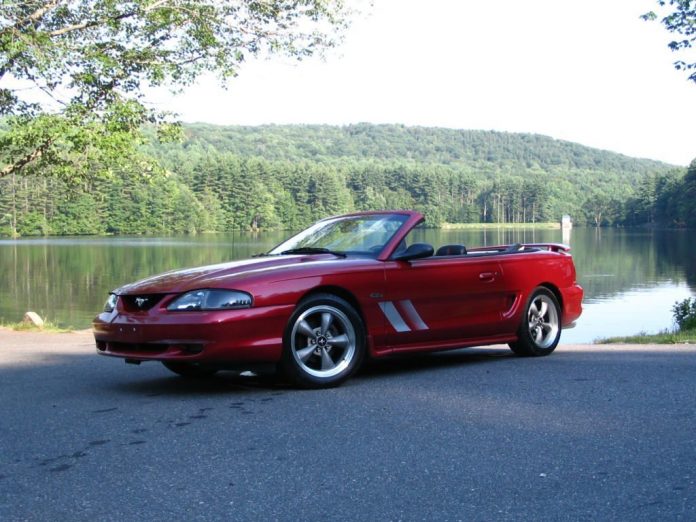 I didn’t start my journey into firearms as a Glock guy – in fact, the first pistol I ever purchased was by trusty old 1911. It took time, and the constant badgering of men with tactical experience and proficiency that I respected to convince me that I needed to try one out for myself. So, when the Generation 4 Glocks hit the market, I scooped myself up a nice, cheap Gen 3 Glock 19, and, much to the chagrin of all my 1911 toting buddies, I fell in love.

That isn’t to say that I don’t like my 1911 anymore. While the upvote/downvote culture of the internet might have you convinced that you have to choose between the Glock and the 1911, I’m here to tell you that buying into that kind of polarizing culture is foolish – shoot the stuff you like, and don’t worry about what the forums think. My 1911 feels like a piece of history, and my Glock? Well … it feels a bit like the Ford Mustang I used to work on in high school.

Long before I was a U.S. Marine, I was a punk kid with a Mustang GT and a Sears toolbox. My (salvaged and rebuilt) car was arguably the loudest, quickest, meanest ride in my little Vermont high school, and of course, that also meant I could only drive it a few months a year. Nitrous, bald tires, and snowy Vermont roads just don’t quite mix … but man, did I love that car.

A Marine with a Mustang – is anyone at all surprised?

My Mustang happened to be a ’96, which was the first year Ford switched to modular 4.6 liter V8 instead of the classic pushrod 5.0. It was underpowered but torque-y, and best of all, there was no shortage of aftermarket parts available to me and my grocery-bagging price range. Throttle body, exhaust, headers, lowering springs and eventually even used heads off of a newer, better flowing 99+ Mustang. I told myself it was driving the car that I loved, but in hindsight I think it was tinkering with it that really called to me. Half the stuff I did to that car didn’t really make it any faster (or only offered negligible gains), and I didn’t approach it with a tuning strategy like you have to when actually building a street-car, I just bought stuff online and spent my evenings throwing wrenches at the thing until it went back together, and then congratulating myself on another job well done.

Despite working with race cars for some time in my life, I’ve never been able to do this stuff without the manual shown under these throttle bodies.

That Mustang wasn’t the fastest car in the world, nor was it the coolest or the fanciest, but in every way that mattered, it was mine. I don’t mean mine in the sense that I had the title (which read SALVAGE in large, red letters, of course – I didn’t have the budget to buy an entire Mustang all at once), but mine in the sense that there wasn’t a single part of that car that I hadn’t pulled off, fiddled with, cleaned up, replaced or gotten rid of. The car was a rolling representation of who I was, produced through countless hours of plotting, scheming, saving and tinkering. For many of the people in my little home town, that obnoxiously loud Mustang and I were physical synonyms. This is my Mustang. There are many like it, but this one is mine.

I still had that Mustang when I married my wife, and once tried to break the cross-country record with it using a few thousand dollars worth of fuel and almost as much nitrous oxide, until we found ourselves stranded on the side of the road in New Mexico (we still made it in 43 hours, even after spending hours working on it). But as time went by, I couldn’t afford to devote all my spare cash to tinkering anymore, and my wife was growing impatient with shipping a third car around the country every time I got orders to a new duty station.

This was our view for much of the latter half of the trip.

So I sold it and bought a motorcycle, that I proceeded to yank apart and put back together all the time, just like the Mustang had once been for me. You guys knows the story though — crash that bike one too many times and it starts getting harder to justify it to your wife too. Eventually, you convince yourself that you’ll sell it to help pay the bills (during my very low-paying writing days), but you’ll “buy another one as soon as things get better.” You don’t, and one day you wake up and find yourself driving a Honda CR-V with a car seat in the back, telling stories about the days when you were cool.

But then I bought my Glock.

When I first bought my AR-15, it looked like the rifle my father carried in Vietnam, and I had a blast swapping out components and building it into a platform I’d enjoy shooting, but even that didn’t offer the same combination of easy-to-swap parts and budget friendly upgrades you can get for your Glock. I know what some of you 1911 guys are saying right now, “well my gun was so good, I didn’t have to buy anything!” You’re right – I love my 1911 just the way it was when I took it out of the box … but my Glock? It’s no longer just a pistol to me; it’s so specifically mine that in many ways this hunk of plastic and metal has become every bit that physical synonym for “Alex” that my Mustang once was.

It’s functional, combines cheap parts with pricey ones,  it’s constantly changing, and most of all, there isn’t a single component in this pistol that I haven’t swapped out, replaced, or meddled with. I know this pistol like the engine bay of my old Mustang, and just like that car, I find peace when it’s in pieces.

Some shooters will look at the things I’ve done to my Glock and roll their eyes, hell, I lost some of you the moment I said I stowed my 1911 to start carrying a Glock at all, but in all the same ways I’m constantly torn between the dichotomy of fun and function, my trusty Glock 19 is too. Some changes make perfect sense — extended mag release genuinely improved my reload times and the TruGlo sights are worth their weight in gold. The Batman logo makes no damn sense – he doesn’t carry a gun. The Gadsden flag (like my tattoo) makes people think I’m some sort of conservative extremist (rather than a patriotic history buff), and I can assure you that I’m probably not a good enough shooter to really need the aftermarket barrel, extra heavy guide rod, etc. etc. etc.

Although most of the work I’ve done has been swapping out internal components, these are the changes most people notice.

This is my Glock. There are many like it, but this one is mine.