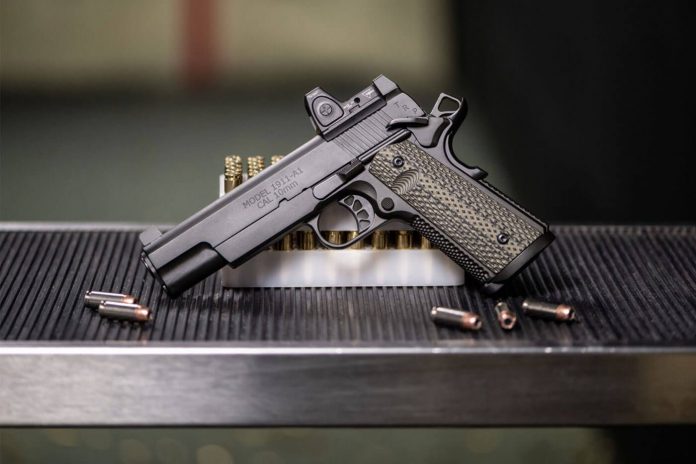 Micro Red Dot Sights (MRDS) are continuing to increase in popularity as their costs have come down and durability, precision, and clarity have skyrocketed. Today, mounting a pistol red dot sight is seen as a standard option and not nearly so incredible an eccentric add on that its the work of “custom” locations only.

Like the AR-15, the carry pistol has become a far more modular unit on the end user level. Optics ready pistols are in standard production from major manufacturers, adding to the older changeable grip modules and night sight options that emerged in the previous generations of “standard” carry options.

Pistol red dots and micro red dots do present a few challenges, most notably their mounting methods aren’t standardized. Handguns aren’t topped with a section of rail (except AR type pistols, yes) and instead rely on the individual optic bolt on mount pattern to secure them to the gun.

And that brings us to our first point with mounting.

What is your mount pattern?

Luckily for us the folks at Optics Info have a well assembled guide that organizes the various optical footprints. It makes it much easier to verify if an optic can work on another mounting base. I used it to match mounts for my IWI Masada and put a USO DRS on it.

After using the guide to match up cross compatibility on mounts its onto the next step.

Choosing your actual mounting system is narrowed down by knowing your mounting pattern. The Trijicon RMR pattern is probably the most popular, but the game of dots has several disparate options that fall into several bolt and shock/recoil lug patterns.

So now you must choose between a temporary attachable, modular permanent, or dedicated permanent solutions.

The best example, in my opinion, of a temporary mount done correctly is the Balor RDS. This red dot system does not permanently modify a Glock handgun and requires very minimal tooling to add and remove should you so choose. No machining.

Now this mount is only for Glocks, I get that. But there are one thousand metric tons of Glocks out there. The Glock 17 is estimated to be the most widely produced handgun model in the word. They work. Period. Which makes this an impressively simple solution. It is available with Aimpoint Micro (T1/T2) and RMR mount patterns, the two most durable optics in this space.

It’s limited in scope but designed for the widest single swath of the sidearm market with several sights that will be compatible.

It’s all about that base plate.

Modular Permanent options are usually factory built. The let you pick from a selection of base plates that match the bolt mounting pattern of your sight to the mount on the pistol.

The modular permanent option gives you the widest available optic compatibility. Additionally this allows you to try more than one optical sight without modifying your pistol and allows you to pick a pistol without worrying about deciding on an optic right away also. It allows the pistol owner to be flexible in their decision process and time.

It still isn’t 100% cross compatible. The DRS that’s on Masada is a Vortex compatible bolt pattern. However I had to grind just a little material away with a hand file to get it to fit because the DRS is a squared front. Dozens of options will mount to a modular permanent base.

The permanent optic option is actually my ultimate preference. Choose your optic and keep it there… but at the same time I’m known for playing optical musical chairs with my guns… decisions decisions.

The permanent mounts are usually the easiest to set up for co-witness and the most sturdy melding of red dot and pistol slide. The less pieces involved, the simpler the system. But this involves permanent, usually aftermarket, machining on the slide.

You get one shot, one opportunity to pick your footprint, height, location, and anything else a permanent modification can grant you, but then it is done. Putting material back doesn’t really work out. So buy once, cry once, and your handgun is set.

The various systems have strengths and weaknesses, mostly on the compatibility front, but some limits on platforms. The greatest challenge on any of these is holstering them now that they have hardware sitting on top of the slide.

Dots are continuing to get better, easier, and gain wider and wider acceptance in the firearms community outside the older circles where they originally resided.

Are red dots “needed” on a carry or home defense gun? No. They are extremely useful, just like a dot on a rifle isn’t “needed” to run it well. They are tools of ease. They simplify the aiming equation and as you get used to new sight plane life at longer distances gets better. 10, 15, 25, and even 50 yards aren’t that scary anymore when your eyes don’t have to fight between 3 focal lengths.

Have you added a dot yet? Are you considering one?