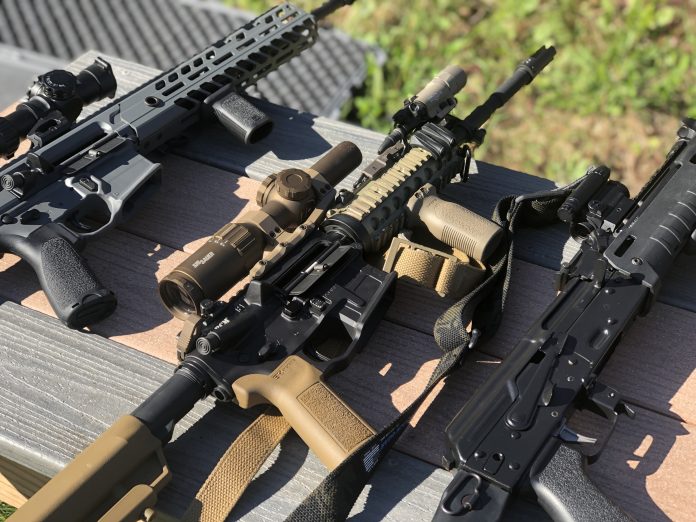 The Army announced the nearly $80 million dollar contract award to SIG for up to 120,000 optics in recent weeks. The LPVO that won was their popular Tango 6T but the reticle design and final selected specifications were not know.

I suspected that the Big Army was picking up the M855A1 S-VPS like SOCOM selected. I was mistaken, they got something new.

With the announced feature set, both M4A1 and M27’s will begin fielding illuminated reticle front-focal-plane optics with the United States Marines and United States Army. The Air Force are also fielding optics out of this award for their M4’s if my memory serves me correctly.

As exciting as the NGSW program is to follow, if we look at procurement operations and wider acquisition programs the current crop of AR-15 based service rifles will be around for a good long while yet.

NEWINGTON, N.H., (November 9, 2020) – SIG SAUER, Inc. is proud to announce the TANGO6T has been selected by the U.S. Department of Defense for the Direct View Optic (DVO) in response to a solicitation to enhance squad performance with a variable powered riflescope.  Unlike older generation non-magnified or fixed-magnification optics, the TANGO6T is a 1-6X variable-magnification riflescope that enables the soldier to engage both close quarter targets and targets at extended ranges.

“After rigorous and stringent testing, where the best of the industry competed, we are proud to confirm the SIG SAUER TANGO6T riflescope has been selected by the U.S. Army as the Direct View Optic,” began Ron Cohen, President and CEO, SIG SAUER, Inc.  “This is a three-peat for the TANGO6T as the riflescope continues to prove it will withstand the rigors of U.S. military testing making it the choice for use with our soldiers.  The further proliferation of the riflescope into the U.S. Military’s M4A1 operating system is an exciting achievement for SIG SAUER Electro-Optics and further proof that the TANGO6T is the direction of the future.”

“The TANGO6T riflescope platform has been ruggedized and battle-hardened over the course of both the SDMR and S-VPS programs,” added Andy York, President, SIG SAUER Electro-Optics.  “We are proud to assemble the TANGO6T here in the USA to support our warfighters with a variable powered riflescope that was developed to match the engagement requirements of today’s battlefield.”

The SIG SAUER TANGO6T 1-6x24MM riflescope is available commercially at local retailers and at sigsauer.com, in first and second plane, and varying reticles including 5.56/7.62 Horseshoe Dot, HELLFIRE MOA Milling, HELLFIRE FL-6 and the new DWLR6.   “This award solidifies the TANGO6T as the premier riflescope of the U.S. military as it continues to exceed the highest standards for ruggedization, range, and accuracy throughout testing protocols, and in the field with our soldiers.  We are honored to partner with the U.S. Department of Defense as they continue to modernize their weapons systems and look forward to the continued proliferation of the TANGO6T amongst our fighting forces,” concluded Cohen.

All SIG SAUER TANGO6 riflescopes are designed and assembled in the USA at the state-of-the-art, ISO-certified, SIG SAUER Electro-Optics facility in Wilsonville, Oregon.

About SIG SAUER, Inc.
SIG SAUER, Inc. is a leading provider and manufacturer of firearms, electro-optics, ammunition, airguns, suppressors, and training. For over 250 years SIG SAUER, Inc. has evolved, and thrived, by blending American ingenuity, German engineering, and Swiss precision.  Today, SIG SAUER is synonymous with industry-leading quality and innovation which has made it the brand of choice amongst the U.S. Military, the global defense community, law enforcement, competitive shooters, hunters, and responsible citizens.  Additionally, SIG SAUER is the premier provider of elite firearms instruction and tactical training at the SIG SAUER Academy.  Headquartered in Newington, New Hampshire, SIG SAUER has over 2,000 employees across eight locations.  For more information about the company and product line visit: sigsauer.com.