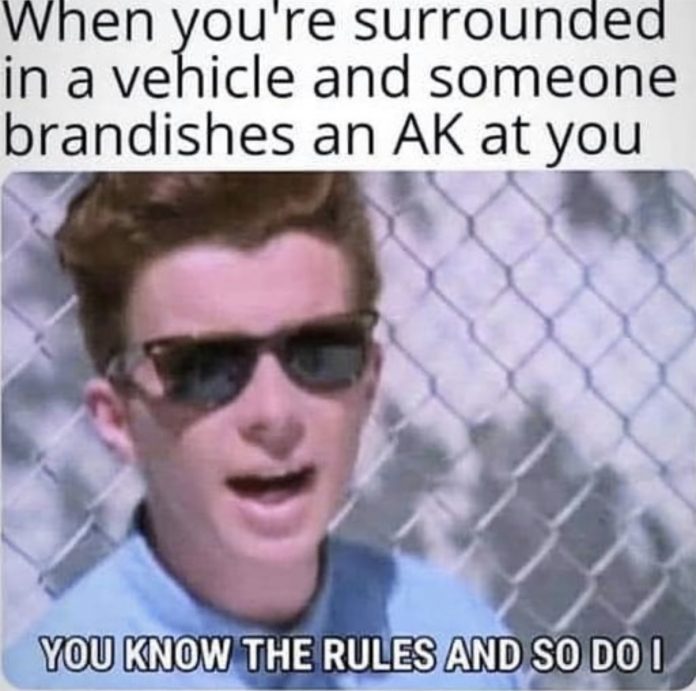 It’s been a weekend… I don’t know how else to put it. It was a weekend across the nation as places like Portland and Chicago continue to experience violent crime and unrest. Media outlets continue to try and spin riots as peaceful protests with just a side of violence and arson and people in general just seem to be over it…

Louisville Kentucky: The Not F*cking Around Coalition F*cked around and found out with 3 injured in a negligent discharge.

300 Members of NFAC, the Not F*cking Around Coalition (no, seriously that is their name) marched armed through Louisville in another protest demanding justice in the wrongful death of Breonna Taylor. Breonna was killed in a no-knock SWAT raid that was at the wrong address.

No-knock raids have come under incredibly harsh scrutiny and how police officers conduct other checks on private property has too as several officer involved killings have been highly publicized. Breonna Taylor’s case and that of her lawfully armed boyfriend (who was taken into custody with pending charges but later released and all charges dropped) bring back memories of Atatiana Jefferson, a 28-year old Fort Worth woman who was shot and killed by an officer doing a check on an open door.

Atatiana had gotten her handgun when she saw movement she didn’t recognize outside her house. The officer saw the handgun and fired, killing Atatiana in front of her 8-year old nephew who she she was playing video games with at the time. The officer later resigned from the department and was indicted for murder, he had only 18 months on the job and his record indicated supervisors though he suffered from “tunnel vision” and trouble communicating with the public.

But back to the incredibly ironic NFAC march. Which was described as “tense but peaceful” as members of III% Militia also showed up in support of police. The only injuries reported were the three who got hit by the negligent discharge. The fact the little movement has been seen to address the Taylor case remains a point of high contention since it seen as just more proof that officers can get away with making a lethal mistake and be held to no consequence. Even if this is a department level screw up the details on who is to be held accountable are far from clear or if anyone at all will be held accountable for the no-knock raid. A practice considered by many to be wholly unconstitutional under nearly all possible circumstances.

BREAKING: We just watched two people be taken onto stretchers at Baxter square on 12th and Jefferson. Metro safe has confirmed reports of shootings & that there are multiple victims. We heard the noises when people scattered to get behind cars, & to take a knee @WHAS11 #nightteam pic.twitter.com/h5AsPWlLbi

Americans across the nation have armed up in the wake of COVID and the riots on all ends of the political spectrum as they are shown the limits of what public law enforcement can do for their individual safety. Gun ownership among the Black community and Black gun groups are growing in number. This is far from a bad thing but as we see from NFAC, the four rules still apply to everyone. Virginia’s 2A rally was a perfect example of the fact it can be done.

Masked and carrying an AK at a BLM protest in a now internet famous interview, he said if he ‘uses it against the cops he is dead.’ Later that evening he proved that wasn’t the only way to die when he approached a vehicle that had been surrounded by protesters. Five shots are heard as Garrett was shot by the driver.

Garrett is seen in the crowd shouldering something, presumed to be the AK (not the quadruple amputee in a wheelchair he was photographed with earlier in the day and alleged to have been pushing along instead at the time of the shooting, by some sources. Reported to be his fiance.) and approaching the drivers window when the first five shots rang out. Several shots are heard a few seconds afterward as a protester shoots at the vehicle. The driver then called 911 to report the incident.

As Garrett approached the vehicle with the AK at low ready the driver decided he wasn’t going to get Kilt in da Streetz, and also this is Texas. He provided ballistic deterrence to the hostile masked man in the hostile crowd pointing an AK at him. The later shots heard are then the individual in the crowd allegedly opening fire on the driver, which could potentially make that person a criminal accessory in Garrett’s death. How? A manner similar to one or more members of a home invasion being killed and the remaining participants are held liable for the death.. because it was a collectively lethally dumb idea.

Garrett’s famous last words on camera calling people who were “against them” (Them being the Fort Worth BLM Protest) out as “too big of pussies to do anything about it” will remain perhaps as legendary an irony as the Dallas Federal Courthouse ‘Almost‘ Mass Shooter.

DMN staff photographer @TomFoxPhoto captured this image shortly before a gunman opened fire on the Earle Cabell Federal Building Monday morning in downtown Dallas. Fox was waiting to enter the building to cover a trial when the attack took place. https://t.co/y8fWYYuKjs pic.twitter.com/fE1kFlEy9j

Foster f*cked around and found out, just like Brian Clyde before him. He leaves his family and fiance behind because he approached a detained and besieged vehicle with a rifle at the ready.

Pro Tips: Don’t entrap vehicles. Don’t muzzle drivers with your AK like you intend to shoot or detain them against their will. Don’t mess with Texans.

Guess who Chicago’s Mayor Blames for the Rise in Violence?

Yes, the Mayor of the Windy City (and the Zombies) is once again blaming their neighbors for flooding the streets with guns… other things like that. Apparently, “The fact of the matter is our gun problem is related to the fact that we have too many illegal guns in our streets — 60% of which come from states outside of Illinois. We are being inundated with guns from states that have virtually no gun control, no background checks, no ban on assault weapons,” Mayor Lightfoot said.

She must be including the rest of Illinois in her tirade (there’s another 40% after all) because the state doesn’t ban ‘Assault Weapons’ or magazines, but they are prohibited in Cook County.

President Trump has promised to make up to 75,000 Federal Officers of various agencies available to assist these cities in their law enforcement plans but Mayor Lightfoot says what they really need is…

GUN CONTROL. Because of all those states like Wisconsin, Indiana, Michigan, Ohio, and Iowa just flooding the state with unbackground checked guns. Because none of the states has background checks or gun laws, virtually.

It couldn’t be that the viral pandemic and riots have everyone on a short fuse and opportunistic criminals out in force could it? It couldn’t be violent gangs murdering each other and reprising slights with cut back on police enforcing due to medical and social pressure? Nope, guns. Totally the guns according to Lightfoot.