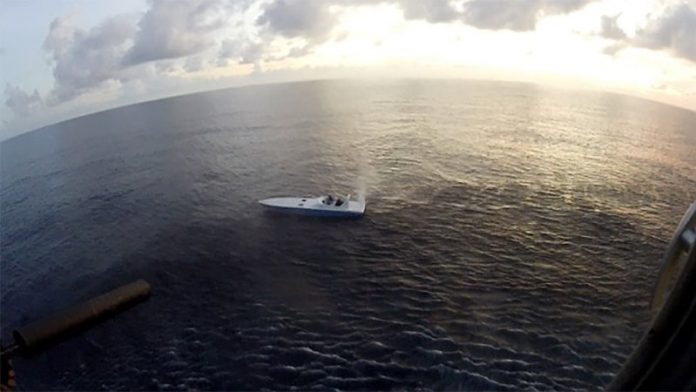 A Royal Marine sniper blasted a speedboat carrying £40million of cocaine after a dramatic six-hour chase across the Caribbean. Navy ship Wave Knight launched a Lynx helicopter to fire shots at the traffickers during a daring operation in the middle of the sea.

They ignored the shots, forcing a sniper in the back of the helicopter to shoot out the engines of the speedboat and stopping the cocaine reaching its destination. The dramatic mission was captured on camera. Photographs showed the marine firing the shot from the sky as the traffickers watched from below.

Wave Knight is currently preparing to host Prince Harry during his planned tour of Caribbean later this month.  The Prince will be given a cabin on the ship as he travels around the islands representing his grandmother, The Queen.

A Ministry of Defence statement said: ‘Royal Fleet Auxiliary Wave Knight concluded a dramatic six hour chase across the Caribbean, by shooting out the engines of a go-fast speedboat.

‘More than £40m of cocaine never reached its destination. The successful bust was sparked by a maritime patrol aircraft sighting the go-fast and directing RFA Wave Knight to intercept.

‘She responded by bearing down on the speedboat – and launching her helicopter, which no boat could outrun.’

A spokesman said the sniper in the back a Lynx helicopter from 815 Naval Air Squadron ‘first fired warning shots ahead of the go-fast calling on the traffickers to stop and then’.

Tests revealed it to be 350kg of cocaine with a wholesale value on the streets of more than £14million had those drugs reached the UK. Before the boarding team reached the vessel, the traffickers threw several bales overboard. US authorities assessed 650kg of cocaine worth around £26million was abandoned. The go-fast itself subsequently sank.

In total, fourteen bales of illegal drugs were captured in a combined operation by the Royal Navy, Royal Fleet Auxiliary and US Coast Guard in waters between Venezuela and Puerto Rico.

The five crew of the go-fast plus the haul of drugs were later transferred to the US Coast Guard cutter Richard Etheridge and handed over to authorities in Miami Beach.