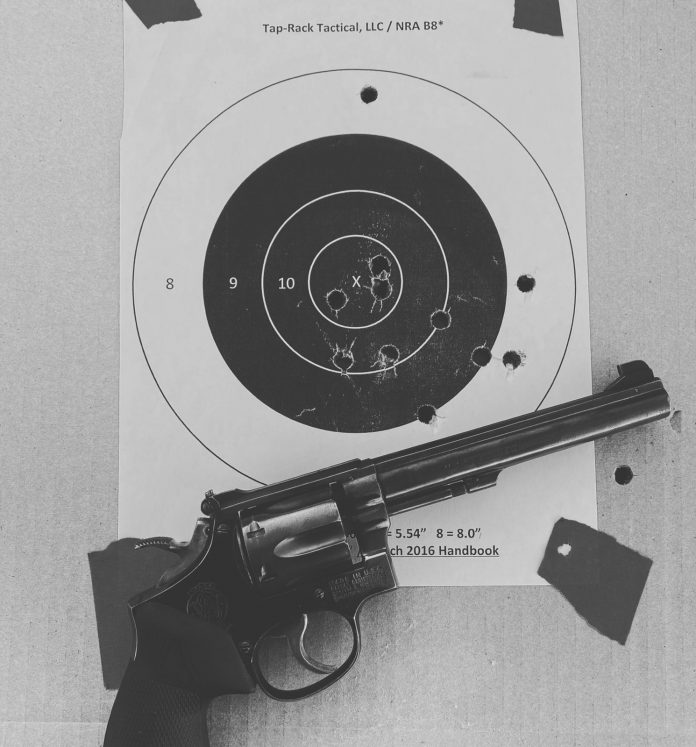 The Smith and Wesson Model 14 revolver is one of the true classic members of the .38 Special K-frame family. These were known back in the day for their target match shooting performance out of the box. Typically, a Model 14 revolver has adjustable Patridge target sights and a six inch barrel. First unveiled in 1947, these guns quickly became a favorite of serious shooters during the golden age of the double action revolver, for both competitors and police officers. Besides the generous sight radius and crisp sight picture afforded by this revolver’s sights, it also balances quite nicely. Ever since I noticed how pleasant 148gr .38 Special wadcutters feel when shooting them from a Model 14, I started looking out for one to call my own. The overall pleasant experience, smoothness of the action and great accuracy with match .38 caliber ammunition led me to dub it the “Goldilocks Gun.”

Smith and Wesson’s “model number nomenclature” did not become a thing until the year 1957, so prior to that guns just had names like Military & Police, Registered Magnum, Target Masterpiece, Combat Masterpiece, etc. The Model 14 in particular was known as the K-38 Target Masterpiece. While nowadays a six inch barrel on a revolver might be seen as too long and not the first choice, the majority of target revolvers of yesteryear were built with such barrel lengths in mind. Besides these longer barrels, the Model 14 had adjustable target sights which might as well have been the mounted dot sight equivalent of their day, especially if one compares the rudimentary sights found on basic service or general purpose revolvers back then. More basic guns had a rear sight that milled through the revolver’s topstrap and the front sight was just a rudimentary blade fixed in place. On the other hand, the Model 14 specifically had Patridge sights. E. E. Patridge came up with his design in the late 1890s and these quickly became the go-to for accuracy oriented target pistols. A thick front sight blade lines up evenly in front of a square notch while still allowing some light on either side of the front blade. The sight picture this arrangement provides is ideal for a 6 o’clock hold when shooting bullseye targets.

THE MODEL 14 IN MATCHES AND LAW ENFORCEMENT

The Model 14 was nearly perfect for bullseye and PPC (Police Pistol Combat Competition) out of the box. Prior to the popularity of action pistol sports like IPSC or IDPA, old school serious shooters participated in these types of shooting events. Accuracy in either of these disciplines was paramount, and matches were often determined by the number of “X-ring” tie breaker hits. Naturally it follows that these older games would require more accuracy. As most revolvers held only six cartridges it was important both in sport and combat that all six rounds had to count. Famous pistol shooter, Jack Weaver (inventor of the Weaver stance) used to shoot with a Model 14. His skill level was such that he had no problem competing against shooters with single action 1911s.

Like these archaic handgun games, police shooting tactics then placed a heavier focus on accuracy and standards were more stringent then than they are today. According to Darryl Bolke of HiTS, shooting scores and critical accuracy were held in extremely high regard by police culture of the era, and many departments and agencies already had decades using six inch barreled target revolvers as duty weapons. It comes with no surprise that the Model 14 revolver was an approved pistol that was extensively used by the Los Angeles Police Department during this time period. Officers were originally issued the perennial 158gr LRN standard .38 Special loads. Typically officers carried a fully loaded cylinder and 12 additional cartridges in some drop pouches with the addition of perhaps a back up snub nosed revolver as well. That is a total of 18-23 rounds on board. Every shot had to count. Revolvers like the Model 14 were carried in very old school break open clamshell holsters. These archaic holsters split open from the front in order to make it easier to draw a revolver with a  [relatively long] barrel efficiently.

The Smith and Wesson Model 14 was also prominently featured in the popular LAPD TV show, Adam-12 during its first few seasons until the LAPD started transitioning from the Model 14 to the Smith and Wesson Model 15 revolver during the early 1970s. (The TV switched accordingly to remain consistent with this detail as well). In the 1988 film Colors Sean Penn’s character officer Danny McGavin notably carries a Model 14 as his main duty sidearm as well.

The Smith and Wesson Model 14 revolver became relevant in American gun culture during what was arguably the zenith or the golden age of the double action revolver. Offering police officers and competitors everything they needed out of the box to shoot well, it was also revered as such. Though the sun has set on the service revolver as a primary duty weapon, firearms such as the Smith and Wesson Model 14 continue to bring some utility, pleasure and appreciation for the old ways to modern shooters. Whether it is Smith and Wesson or Colt or any other revolver manufacturer who has been present for generations, often times people remark something along the lines of “they don’t make them like they used to.” This is undoubtedly true, especially for products that have been around for over a century. The Model 14 is a product of an era when gunsmiths worked over and fitted normal factory guns before being shipped out—something that is now economically unfeasible due to the time, money, and skill required to do so. Manufacturing techniques have evolved, in many ways for the better, but these old guns will always retain that “soul.” To understand where one currently is and where they are heading in the future, one must not forget what came before them.