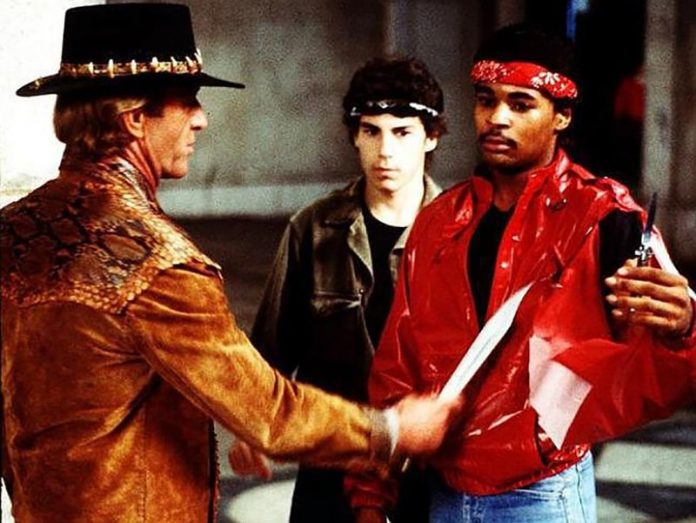 There are all kinds of cool-guy articles about putting lead to steel at the range, also many articles with serious-looking folks in pajamas bending arms and throwing bodies. But something I haven’t seen a lot of are action shots of the Japanese training method known as “tameshigiri“, or practice cutting. Much like ballistic gel is used to simulate how bullets react to human flesh for firearm testing, the practice of tameshigiri involves cutting practice on a realistic simulation of human flesh, without all the mess (and paperwork). I have fifteen years of kendo (Japanese full-contact fencing) and hold a 3rd Dan grading, but even with all that my school never trained with live blades nor practiced tameshigiri. So whilst I had countless hours of swinging at and hitting my opponents, we did so in the knowledge that it was all blunt-force. Again, we were simulating combat, and simulating cutting. 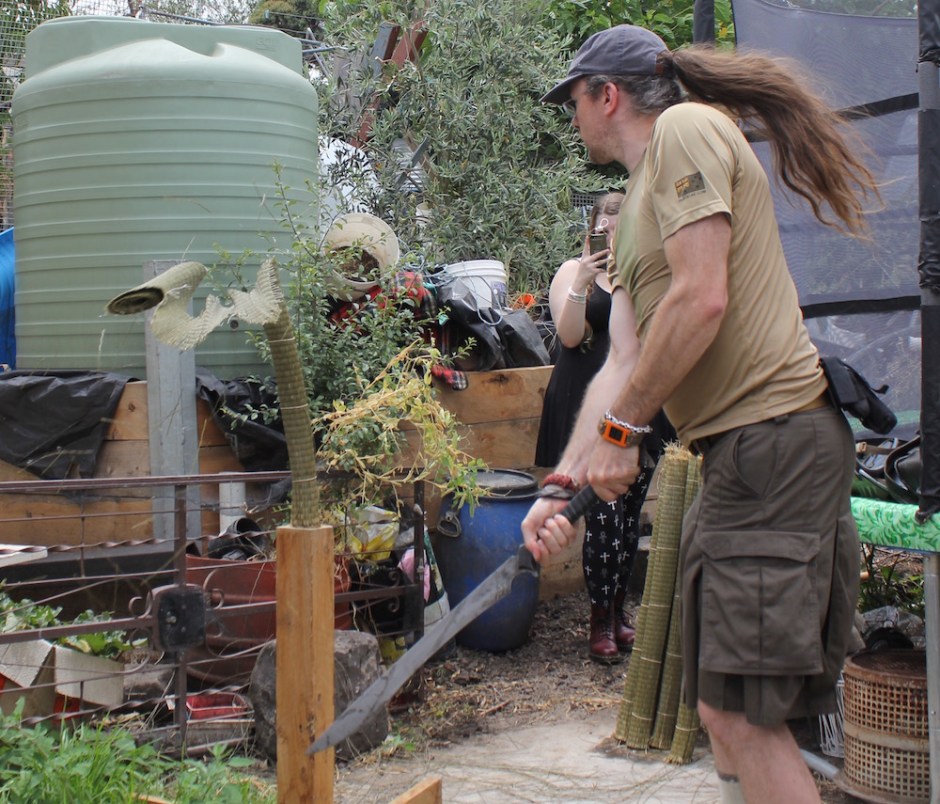 I am fortunate enough to know a senior instructor of a different art, iaido, another modern Japanese martial art and sport that emphasizes being aware and capable of quickly drawing the sword and responding to a sudden attack. But whilst its practitioners use metal blades, and at advanced levels, live blades, they don’t participate in full-contact opposed combat. Because, well, dismembering your training mates is poor form. They do occasionally practice tameshigiri however, to test the techniques they are performing. The targets are made of wet, tightly rolled tatami mat sheets, which need to be cut correctly or they bind up or crumple, immediately demonstrating an ineffective technique. 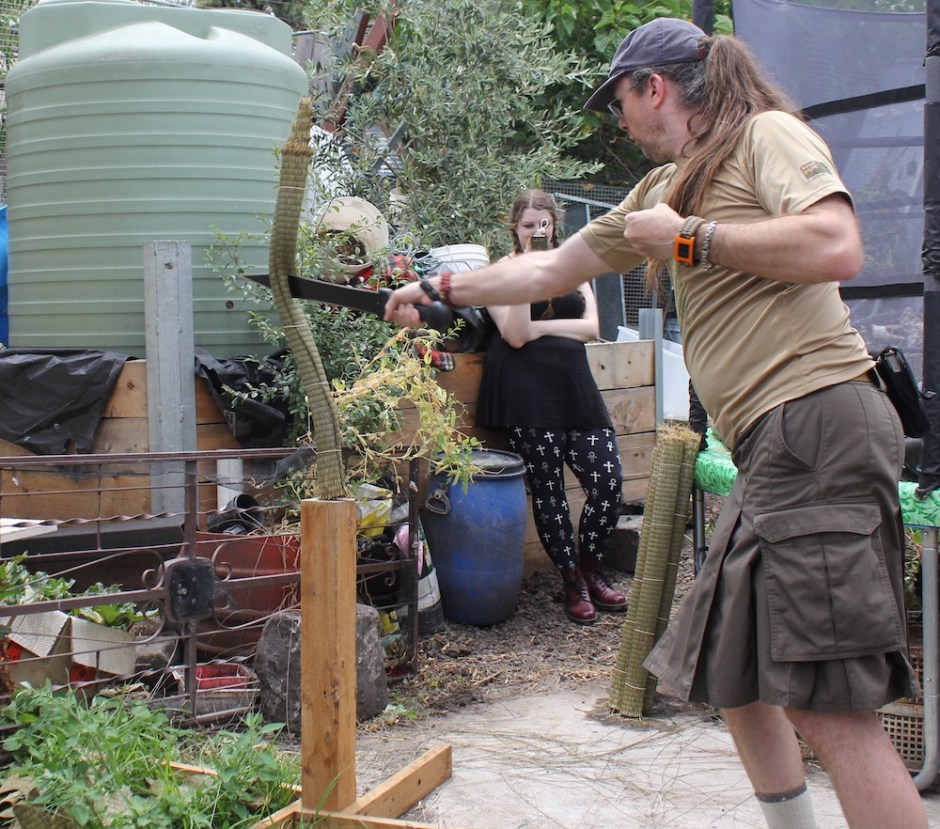 I have quite a collection of pointy and slicey things, and when my friend suggested I come over and not only try my skill but also test my blades, I was only too happy to bring them along. As well as a traditional style Japanese sword (which, no, doesn’t cut through tanks, no matter what the Internet tells you) I tried out my Zombie Tools Deuce sword, my Cold Steel Gladius and my Boker-Plus Tomahook tomahawk. Non-traditional blades from a variety of cultures, all in modern interpretations and used in a traditional style. 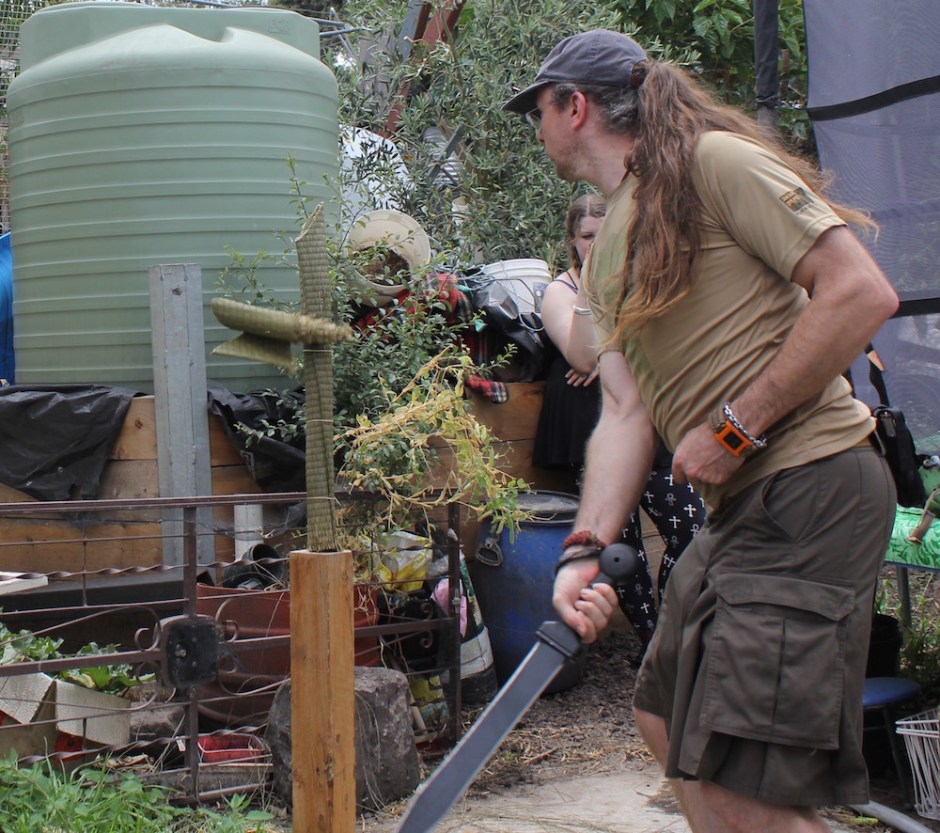 This was my chance to put into action, in a realistic way, the skills I have practiced in the dojo, and to trial how different blades handle a flesh-like material in a controlled way. I’ve done test cutting on different sides of meat, which was quite informative but inconsistent. Anyone who’s spent any time doing combatives will tell you that for best results, training needs to be repetitive to back up lessons learned.  Failure brings better understanding, and having consistent targets like the tatami mats used in tameshigiri gives a similar effect to using standardized targets on a shooting range. 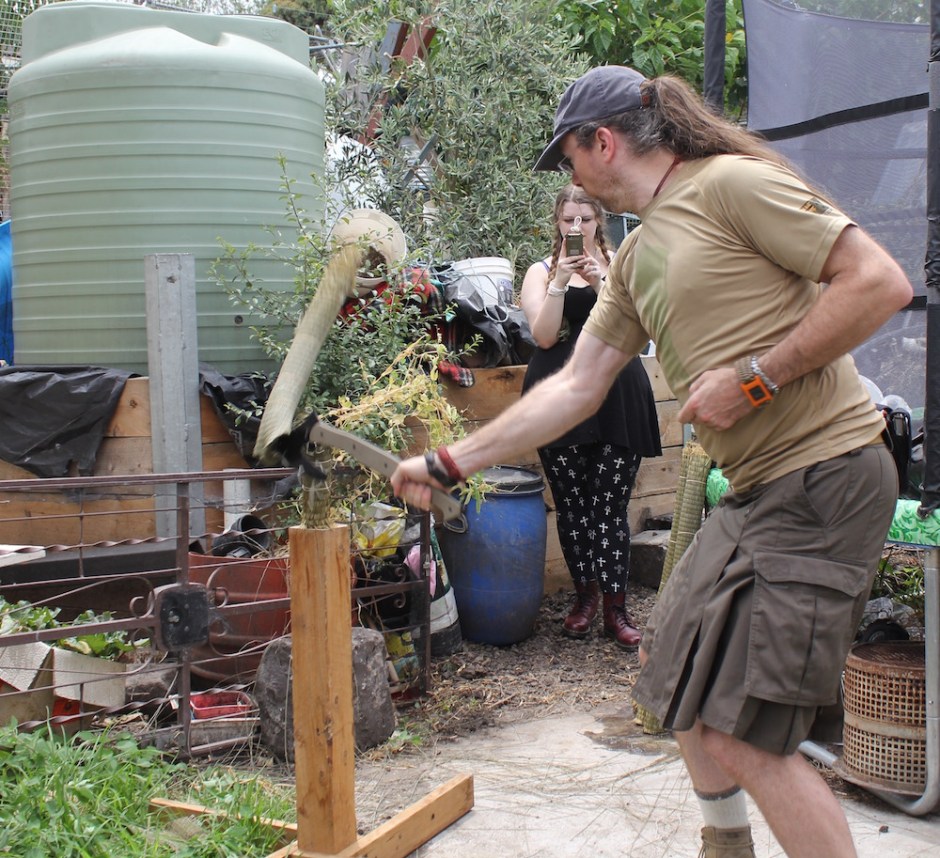 Not all blades are created equal, just as no firearm is, nor the wielder themselves. Even the best-made blade in the wrong situation or in unfamiliar hands may not work nearly as well as a different style, used differently, in the same situation. You don’t use a Barrett M82 to hunt sparrows, and you don’t use a tack-hammer to break a boulder. However, the principles are the same and you can train using the same methods. I found that test-cutting on tatami mats really indicated the principles that my kendo had taught me. The concept of ki-ken-tai-no-icchi which translates as “spirit-sword-body as one”. A good comparison would be the four fundamentals of marksmanship: “steady position, aiming, breathing, trigger squeeze”. A well-made cut will cleave the tatami, an off-kilter cut will fail. 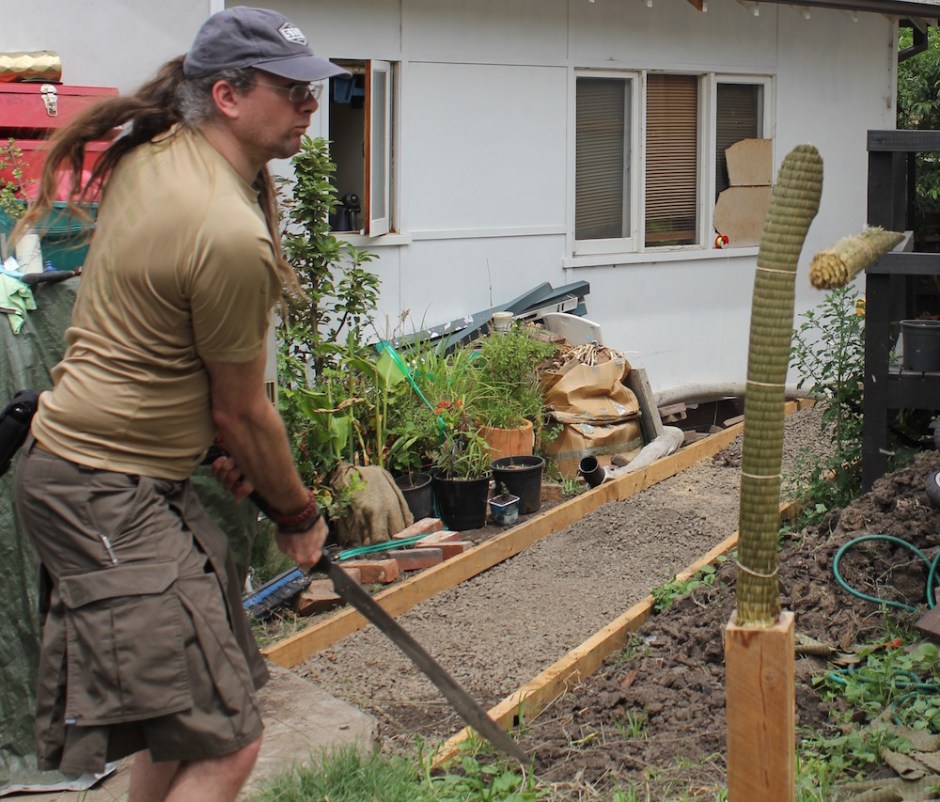 With a blade, probably the most important aspect of cutting is getting the angles right. This is known as hasuji, in Japanese martial arts, the correct cutting angle of the blade as it passes through the target. Just as a a lumberjack learns to chop effectively, a chef learns to slice and a butcher to carve, the wielder of a blade must learn, and practice, to cut effectively. Whether it is a double-handed sword, a machete, a long bladed knife of a tomahawk, (which, I have to say, was the hardest to cut cleanly and straight with) actual cutting of targets is the truest test I have found to test my training. 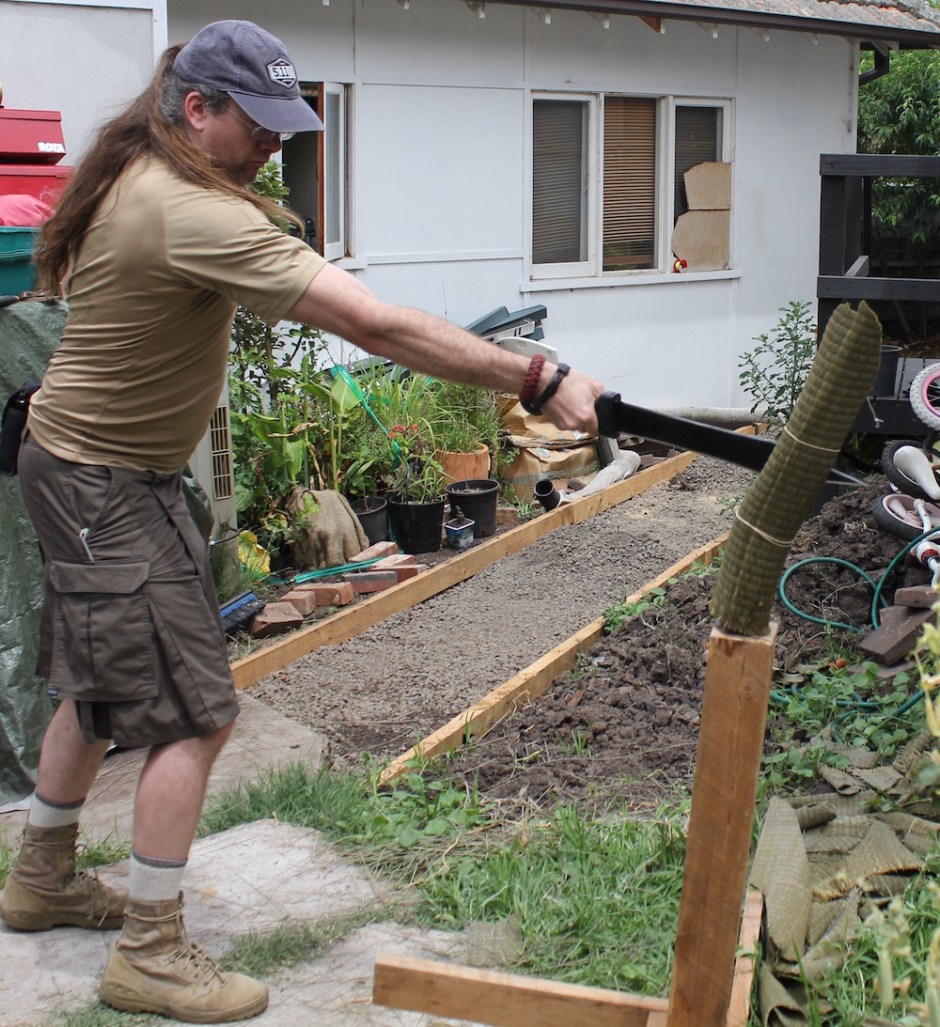 It’s one thing to cut sides of meat, which is obviously a true representation of cutting a person, but it’s an expensive proposition. Cutting corpses or live human targets is obviously out in the vivisected world. All manner of fruit and vegetables could be cut. Free standing lengths of ships rope, water filled bottles, and a variety of other materials could be the cutting target. For my mind though, the truest and most reproducible test is cutting something consistent, tried and true. 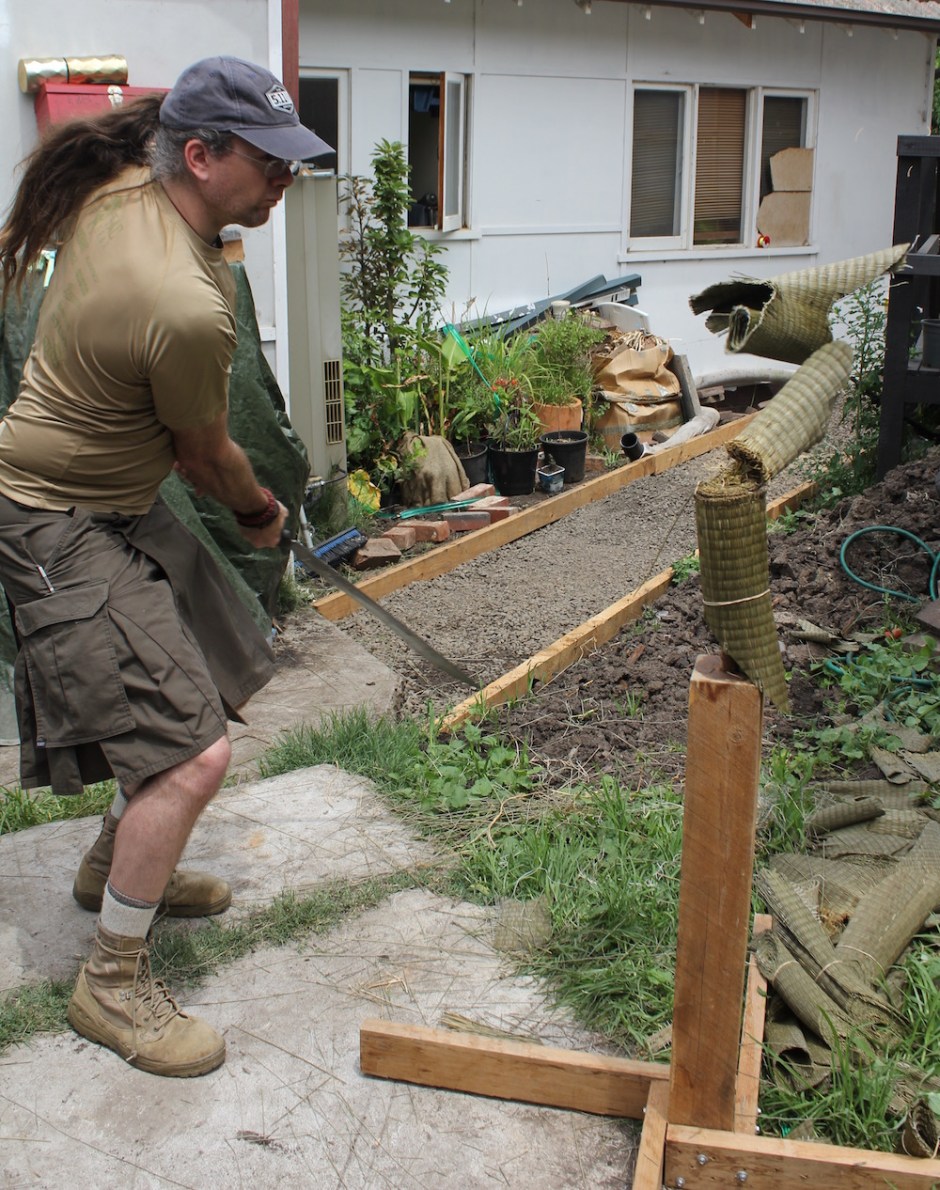 The tatami mats I was cutting were calibrated to simulate human bicep and neck, from a flesh simulation perspective. We didn’t insert a green-bamboo core, to simulate bone in these efforts, but the principle is the same. When properly executed, a sharp blade passes through the mats like a hot knife through butter. Not effortless, but just about. My years of training came together and my blades sang. 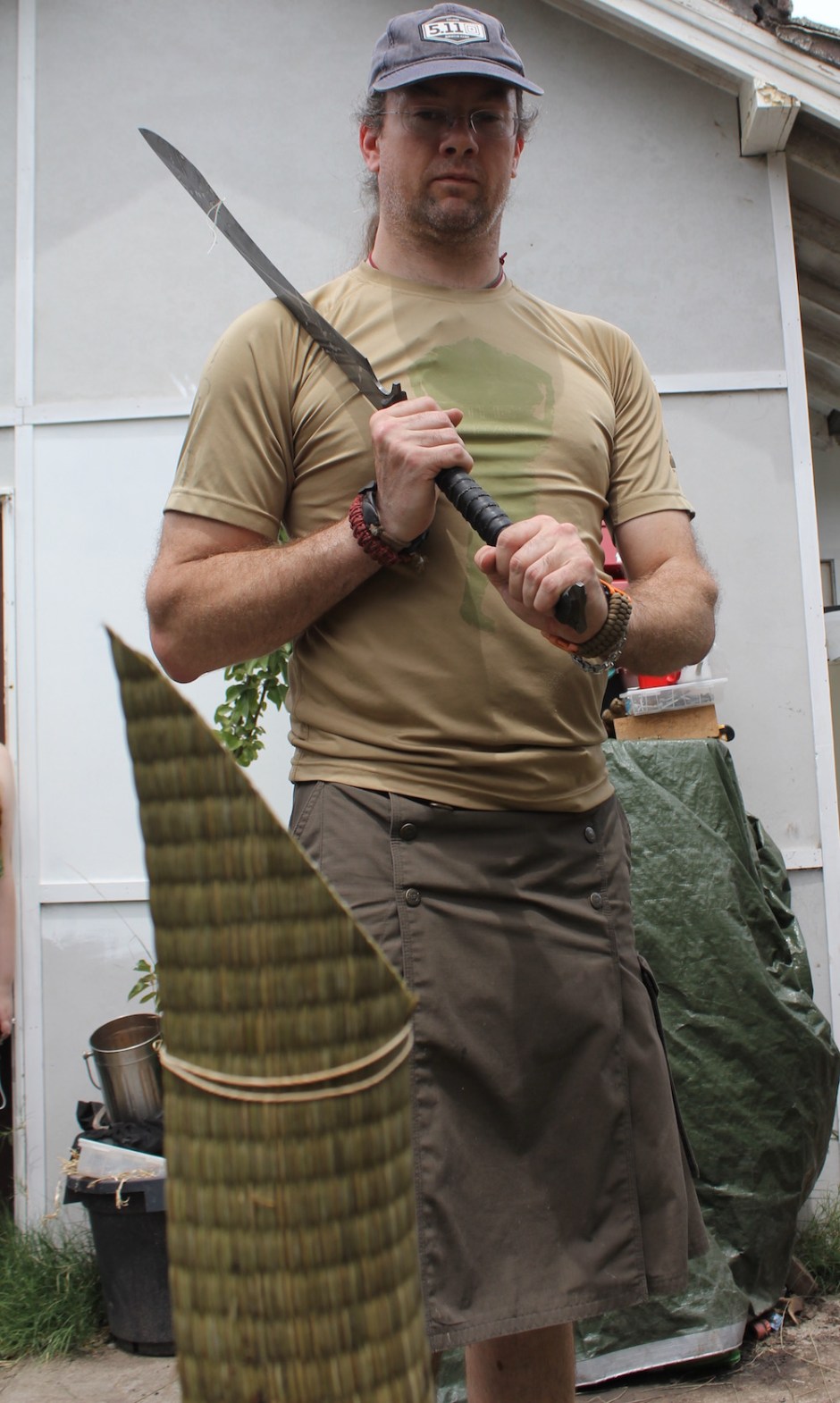 Whether you intend to take a big blade into the field, practice a sword martial art of some kind, swing hatchets or tomahawks, have any of these strapped to your webbing or even just hanging on your wall after a trip to mall-ninja HQ, do your self a favour: get some instruction, pay attention, and when you’re ready, do some live-blade cutting in a controlled, supervised situation.

These may be archaic weapons, they may have very little place in the rank and file of modern warfighting, but they’re still effective in the right situations. They are effective tools worth mastering if you are planning to carry one, or anything like it. Practice. Train. Be effective.