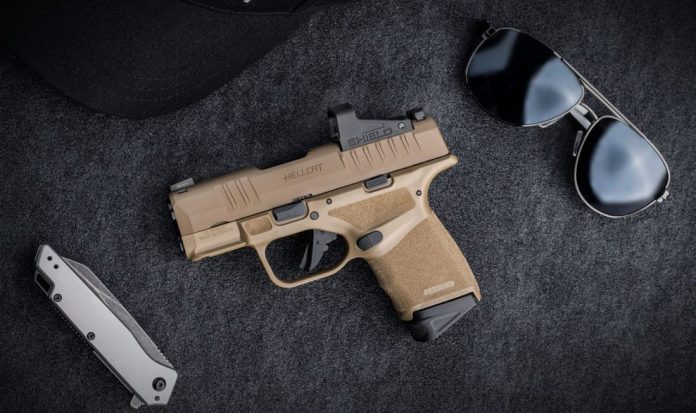 Specifically, the magazines go to court.

Does Sig have a leg to stand on here? Probably, I suspect they have something worth bringing or they wouldn’t have brought it.

Every year there are a copious string of examples of patent violations and IP theft that go un-punished because they do not harm the company who holds it enough to care. It’s the same theory behind loss prevention, you guard your big items and hope your smaller ones don’t get snagged to often. In this case Sig Sauer and Springfield are industry giants, it isn’t Sig vs Bob’s Garage Gun Works, it is Sig vs Springfield. The hi-cap micro-9’s are huge money right now, they may be small sized but they are the big item in concealed carry handguns.

The P365 has seen tremendous commercial success, due to the innovative design of the high-capacity magazine.  In its complaint, SIG alleges that Springfield Armory’s making and selling of certain “Hellcat” branded magazines infringes upon two SIG patents.  SIG SAUER is seeking injunctive relief, as well as monetary damages for Springfield Armory’s past and ongoing infringement.

“When the SIG SAUER P365 was introduced it took the market by storm as the most innovative high-capacity, micro-compact pistol to be introduced due to its magazine capacity, and quickly became one of the top selling handguns in the market due to this unprecedented innovation.  SIG is not a litigious company, but given the extent of infringement by Springfield, SIG has a responsibility to protect both our intellectual property and the significant investment we make to develop our innovative products.  As a company we are proud to yield more than 100 patents worldwide, with more than 40 patent applications currently pending, and we will protect the extensive research and design that goes into developing these patents rigorously.”

About SIG SAUER, Inc.
SIG SAUER, Inc. is a leading provider and manufacturer of firearms, electro-optics, ammunition, airguns, suppressors, and training. For over 250 years SIG SAUER, Inc. has evolved, and thrived, by blending American ingenuity, German engineering, and Swiss precision.  Today, SIG SAUER is synonymous with industry-leading quality and innovation which has made it the brand of choice amongst the U.S. Military, the global defense community, law enforcement, competitive shooters, hunters, and responsible citizens.  Additionally, SIG SAUER is the premier provider of elite firearms instruction and tactical training at the SIG SAUER Academy.  Headquartered in Newington, New Hampshire, SIG SAUER has over 2,300 employees across nine locations.  For more information about the company and product line visit: sigsauer.com.