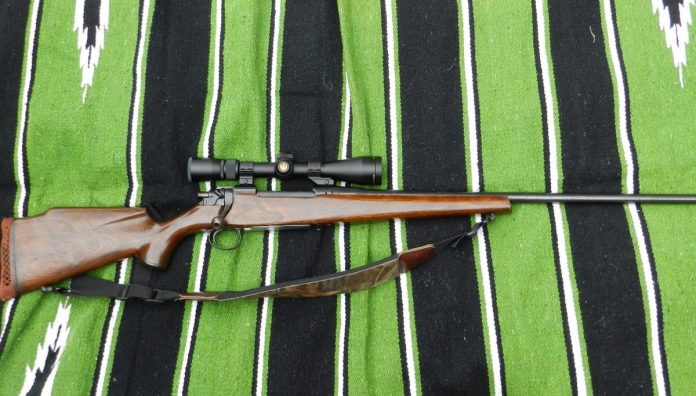 While the rule of thumb in milsurp rifles is “No, bubba, no!” there are thousands of sporterized military rifles already in circulation that need love, too. This M1917 Remington “American Enfield” lost its ears and was sporterized decades ago but still clocks in regularly as a tried-and-true deer rifle. (Photo: Chris Eger/Guns.com)

SEE GREAT PRICES ON 100s OF USED RIFLES IN STOCK

Love them or hate them, there are thousands of surplus military rifles that are floating around as sporters.

Now let us be clear, in most cases, a more or less correct retired military rifle in safe shootable condition, be it a Trapdoor Springfield, Martini-Henry, M1903, or even an SKS, can double as a deer gun with the correct ammo and little further modification. Truth be told, I harvested my first whitetail as a somewhat shaky pre-teen with the help of a stock Argentine DWM Mauser that stood about as tall as I did at the time. These guns, with the right load (150 grains on Garands, please), work and work well.

But we aren’t talking about those vintage dual-purpose firearms. We are talking about the ones that have been “sportified” or, as some say, were “violated by bubba.” These guns, which still have the heart and soul of an old soldier, typically have seen scope mounts added, new Monte Carlo (or even synthetic) furniture added in place of the old full-length wood stocks, chopped-down barrels, and updated sights.

This is not a new thing.

Some of the most popular rifles on the hunting racks from “sea to shining sea” in the early 1900s were milsurp European arms like Remington Rolling Blocks in calibers like .43 Spanish, the big 10.4mm Italian 1871/87 Vetterli and the French M1874 Gras, chambered in 11mm. In a form of “swords into plowshares,” these went from arming soldiers to soldiering on in the task of putting food on the table and giving peace of mind as a symbol of democracy over the fireplace.

Fast forward to the 1920s and WWI surplus Pattern 17 (M1917) Enfields and M1903 Springfields soon began appearing alongside older Krag .30-40s and the flotsam of the Great War. New custom gunsmiths like Griffin & Howe in New York joined well-known Army-Navy retailers like Bannerman’s in converting these guns over to use as “sporter” rifles. Much the same story continued after World War II when the always-steady trickle of Mausers became a downright tsunami of not only German-produced guns but also examples made by companies such as FN in Belgium, Husqvarna in Sweden, Brno in Czechoslovakia, and elsewhere. While many were sold as intact military rifles and brought joy as wall hangers, collectibles and in trips to the field and range, their cheapness and ready availability (at the time) led many to be converted to a handier offering.

Back in the 1950s, companies like Golden State Arms in Pasadena sold small ring Mexican 7mm Mauser actions for as low as $25, advertising they were ideal for rebarreling to “the latest big game caliber, .358 Win” or other chamberings such as .308 Savage, .257 Roberts, .22-250 and .35 Rem. At the same time, Belgian, Czech and German surplus Model 98 Mauser actions were sold, frequently re-barreled with Bushmiller or Apex barrels, chambered in everything from .220 Swift to .35 Whelen and everything in between. Golden State produced a number of these recycled Mauser actions in new walnut stocks. This Springfield M1903 has a serial number that dates it to about 1921 but it has been highly sporterized by the Wiedner Rifle Corp and re-barreled in .257 with a 24-inch barrel and Lyman front and rear sights in addition to a Monte Carlo wooden stock. Looking for someone who is a .257 or 1903 fan, priced at $579.99 Years ago, Century refurbished and rebuilt surplus German Mauser 98s into what they termed the “Centurion 98 Sporter” with a new 22-inch barrel. Sold in both .270 and .30-06, this example is one of the latter, however, we think the stock was upgraded as they were originally sold with synthetic furniture. For $399, why not?

Some of these rifles have been only “gently” sporterized and are still very close to their original condition. Typically, their conversion involved the addition of optics. This Carl Gustav Swedish Mauser, still chambered in 6.5x55mm and carrying its bayonet lug, was long ago fitted with a Weaver Fixed Power Scope. Still, this interesting Swede is ready for the next chapter of its life in the Guns.com Vault, priced at $569.98. This Yugo M24/47 Mauser, in 8mm, looks mostly original, um, except for that extended eye relief Tasco 2x fixed power scope, that is. Still, it’s up for grabs.

Other rifles, which would be considered an abomination to dyed-in-the-wool military collectors, still make great hunting and sporting rifles with a bit of panache that your average Remington 700 or Savage 110 doesn’t possess. This Ankara K. Kale Turkish Mauser dates from 1943 but that 26-inch stainless steel barrel, complete with a muzzle brake, and synthetic stock do not. While no longer perfect for a collector or reenactor, it is only $199! This custom build is a bolt-action rifle with a Mauser action of unknown origin. Its 18-inch barrel has been re-barreled for .257 Roberts with a four-round magazine. It also has Burris scope bases and an oil re-finished walnut stock with a steel buttplate. Good to go for $399.99

Some guns are exquisite conversions– keep in mind that commercial Mauser actions have long been a favorite for safari guns and discerning hunters alike. This FN-H Mauser, chambered in 7x57mm, has a 26-inch barrel with Weaver-style scope bases set in a walnut Monte Carlo stock with a rosewood forend cap. Ready to go home for $855 This CZ VZ 24 features extensive engravings on the magazine floorplate and is chambered in 6.5x68mm, a caliber well-liked in Europe for its high performance and flat trajectory. For more on this beauty, click on the image.

And for those who want to just build their own, there are still plenty of those old barreled actions floating around. Speaking of which: This Husqvarna action, chambered in 6.5x55mm Swedish, is a great $199 gunsmith special.

In the end, these guns have led a long and interesting life. If they could only talk, right? Still, just because someone at some point tweaked its features to make it more ideal for the field doesn’t mean they aren’t still great rifles. Maybe just misunderstood. Be sure to check out our used gun selection for great deals. You never know what you are going to find. (Photo: Richard Taylor/Guns.com)

No matter where you stand on saving orphaned military sporters, you never know what you are going to find while browsing the Guns.com Vault of Certified Used Guns.

SEE GREAT PRICES ON 100s OF USED RIFLES IN STOCK