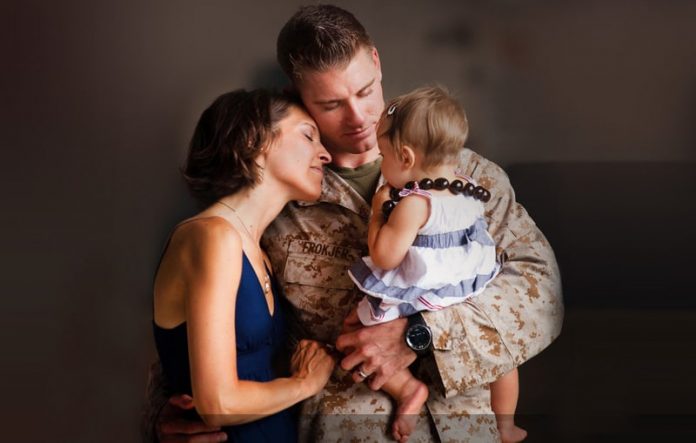 During Military Family Appreciation Month, National Parents Organization has joined the rest of the nation to express gratitude to our military families for their service and sacrifice. While deployment is certainly challenging enough on its own, that stress can increase drastically when military parents are also dealing with child custody battles following a divorce or separation. National Parents Organization believes an additional way to provide support and appreciation for military families is not to make child custody decisions while a parent is deployed.

“The child development research is now crystal clear that children do best when their loving bonds with each parent are protected after parents separate or divorce,” says Ned Holstein, MD, founder of National Parents Organization. “Unfortunately, some active duty service members have found that the custody of their children has been changed in important ways while they were serving their country overseas and unable to be present in family court. Sometimes when they return from overseas duty, they cannot even find their children.”

To ensure child custody decisions are not made while one parent is deployed, National Parents Organization supports laws passed in states such as Michigan, California, and Nevada that provide protections for military parents. National Parents Organization believes these laws have set a good example of how things should be, and encourages more states to follow in this example to help ensure greater peace of mind for military families.

“The recent law change in Michigan is a step in the right direction – it is good for children, who will be enabled to resume their loving relations with a parent who returns from overseas military duty, and any need for a change in the parenting time arrangements can be considered then, with both parties present,” Dr. Holstein said.

The Journal of Epidemiology & Community Health published a 150,000-person study titled “Fifty moves a year: Is there an association between joint physical custody and psychosomatic problems in children?” in May 2015 that concluded shared parenting after divorce or separation is in the best interest of children’s health because the arrangement lowers their stress levels.
The Journal of the American Psychological Association published a paper titled “Social Science and Parenting Plans for Young Children: A Consensus Report” in 2014, and the conclusions were endorsed by 110 eminent authorities around the world. Authored by Dr. Richard Warshak at the University of Texas, the paper concluded, “… shared parenting should be the norm for parenting plans for children of all ages, including very young children.”
The Association of Family and Conciliation Courts (AFCC) published the recommendations of 32 family law experts in 2014, and the group concluded, “Children’s best interests are furthered by parenting plans that provide for continuing and shared parenting relationships that are safe, secure, and developmentally responsive and that also avoid a template calling for a specific division of time imposed on all families.”
Single Parenting Data

According to federal statistics from sources including the U.S. Centers for Disease Control, the U.S. Department of Justice and the U.S. Census Bureau, children raised by single parents account for:

63% of teen suicides;
70% of juveniles in state-operated institutions;
71% of high school drop-outs;
75% of children in chemical abuse centers;
85% of those in prison;
85% of children who exhibit behavioral disorders; and
90% of homeless and runaway children.
MEDIA SOURCE

A regular contributor to local and national media, Dr. Holstein is Founder and Chair of the Board of National Parents Organization. Dr. Holstein was appointed by the Governor of Massachusetts to the Massachusetts Working Group on Child-Centered Family Law, and he was previously appointed by a Massachusetts Chief Justice to a task force charged with reviewing and revising the state’s child support guidelines.

A graduate of Harvard College, Holstein also earned a Master’s degree in psychology from the Massachusetts Institute of Technology. His medical degree is from Mount Sinai School of Medicine, where he later served on the faculty as a teacher and researcher.