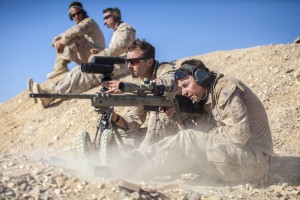 The U.S. military recently decided to refresh its inventory of sniper rifles and sniper rifle accessories from Remington Defense, something the company is more than happy to deliver.

The U.S. Marine Corps awarded Remington Defense a multi-million dollar contract in regard to the M40 Sniper Rifle. The contract includes up to 2,000 modular stocks, spares and magazines.

The M40 is built from a Remington 700 bolt-action rifle chambered in .308, but modified by Marine armorers using components from a number of suppliers.

Also, Remington received a request from the Department of Defense for 443 more Precision Sniper Rifles chambered in .338 Lapua Magnum and 446 more PSR caliber conversion kits in both .300 Win Mag and .308 Win.

U.S. Special Operations Command selected Remington’s Modular Sniper Rifle design as the basis for the PSR in 2013. With a cost of $15,000 per rifle, the contract is worth $79.7 million for 5,150 rifles and suppressors, and 4.6 million rounds of ammo for the 10 years.

Remington Defense is a part of Remington Outdoor Company, a conglomerate based in North Carolina of more than a dozen firearm and firearm related companies. The DoD contract for the PSR comprises Remington Defense for the rifles, Barnes Bullets for the ammunition and Advanced Armament Corporation for the muzzle brakes and suppressors.