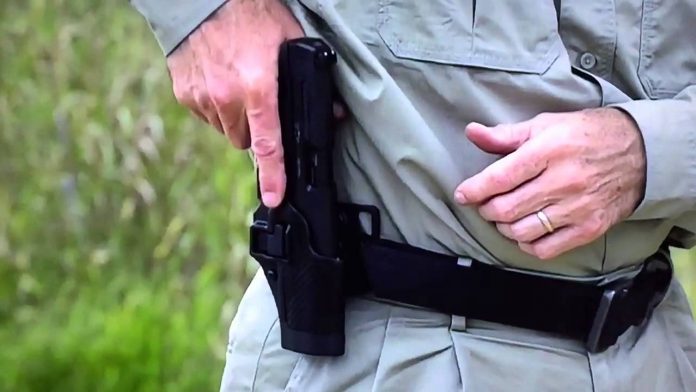 The Blackhawk Serpa holster. Everyone knows this holster from this video..

[At least your should know the holster]

As funny as that is, it still didn’t change everyone’s minds about this holster, including large respectable entities who had bought in big.

I thought this holster was dead and gone until I saw a photo of a military unit within my organization that is still running it. I was then made aware that state patrol entities are also running it as their off duty holster.

So whats the issue? It’s not a lack of information, as any quick google search will show the failure points. In my opinion it’s a lack of strong leadership to be proactive. Entities will wait until an accident happens before anything is done. There are so many accidents with this holster though that I can nearly guarantee it will happen at least once, either during training or on the job. Shoot, officers are still having ND’s while dissembling a Glock. I don’t say that to say that this is a training issue. I say that because Glocks are a very well made and simple firearm, yet accidents are still happening. What will happen with a poorly made piece of equipment such as the Serpa holster? [Editor’s Note: Even the Serpa’s designers have made far better holsters since]

Debris seizing the trigger release and the gun

If you want to give your Public Relations (PR) person some fun days at work addressing the public as to why an officer or Soldier shot themselves in the leg, or their buddy, you can run this holster.

There is no reason that any military entity should be using this holster. The Military times even came out with an article on the issues with this holster during the Marine Corps adoption of it. The article states, “Anybody can get away with safe handling of a SERPA holster under a non-duress situation,” Haley said. “But under stress, it becomes very dangerous because of what our body naturally does. … You are going to tense up and if you go for that gun quickly, especially in a transition situation, five out of 10 guys will have a problem.” -Travis Haley Veteran Force Reconnaissance Marine, Owner HSP

In the Army we are running both M9’s and M17/M18’s now. If you are running a M9, there is no excuse for using a Serpa. There are bins and bins overflowing in inventory of various M9 holsters. I would rather even see the old school nylon made holster being used over a Serpa. Safariland also makes holsters for M9’s. I understand that costs money, however, most Soldiers even running a M9 are higher ranking officials, which can probably swing getting one on order instead of creasing their leg. Or it is a very low number enlisted running M9s and leaders could pony up, so no one creases their leg!

If you are running a M17/M18, Safariland with the Automatic Locking System (ALS) will be your go to.

There is no excuse

Just as the Military has no excuse for running the Serpa holster, LE entities don’t either.

Federal Law Enforcement Training Centers (FLETC) put out a statement and decision on this very holster.

Many LE entities have banned it as well.

In some State Patrol entities, the option for running a different holster is there, just not known about. The Minnesota State Patrol uses Safariland ALS on their duty guns, however they use Serpa as their off duty holster. Completely different drawing techniques.

I had a friend of mine and State Patrol officer, reach out about it. He recently went to a course and saw other LEO’s running a Sarariland with their off duty carry, while he was still running a Serpa. The next day he asked to put the Safarliand ALS on order, and he is now running that holster.

Sometimes it’s a matter of leadership not putting this info out to the entire organization. We call this institutional stagnation.

When you are looking at your options you first need to know what is allowed within the organziation and why. You may need to dig if your leadership isn’t as passionate about life saving equipment for its employees as you are.

Position and organization dependent, you will want to look for an Outside the Waistband (OWB) and strong side holster. Also either Level II or Level III. Again, research.

The option that I kept mentioning is the Safariland ALS Holster.

When ordering this holster, it goes by a number system based on the weapon type, optic, and light bearing. Research or ask, before ordering.

Milspec Monkey did a great write up on the holster while also showing the insides of the Automatic Locking System.
https://www.milspecmonkey.com/weapons-page/holsters/447-safariland-als-holsters

Holsters are a piece of equipment that DIRECTLY impacts you in a life or death situation. Don’t let bad equipment hold you back from providing a life saving standard for yourself or those you protect.