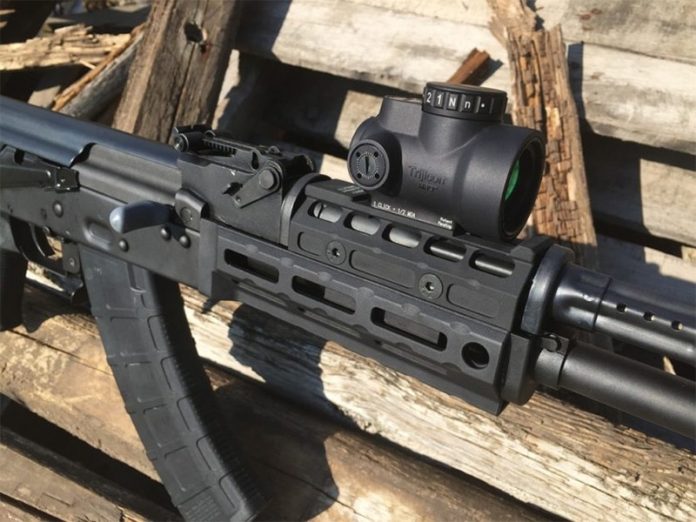 It use to be that if you had any variety of the AK47 rifle your choices of avaialble stock and furniture options were very limited. That isn’t the case anymore and leading the charge in producing good looking and well built functional rail systems for the AK-47 has been Midwest Industries. The company has models to cover almost ever model under the sun it would seem, including the Yugoslavian M70, Krinkov. Midwest Industries even went as far as to produce a extended length set of hand guards and a railed gas tube that features a M1913 style mounting system. The new Generation II rail systems offers users some changes over their older style rails.

The first generation of Midwest Industries AK-47 rails featured an all to familiar lay our of four sets of M1913 style rails and was made out of high-grade 6061 Aluminum. The new generation II rails still use 6061 Aluminum but with a slight twist over the old pattern. Gone are the four sections of picatinny rail replaced by sections of your choice of either M-Lok or KeyMod mounting systems. Another feature of the generation II system is the new generation of top gas tube covers. The old system as I noted were picatinny style rails, the new version is available set up to accept either the Trijicon MRO or the Aimpoint T1 red dot optics. Those shooters who don’t use either a Trijicon MRO or an Aimpoint T1 have no fear, this same style of rail with M-Lok or KeyMod side sections is also available with picatinny style rails over the gas tube. It shows Midwest Industries doesn’t just tailor their products to the rich kids.

Midwest Industries also offers their new M-Lok & KeyMod patterned generation II rails in an extended length variety. The extended length rails are 11.5″ long and tip the scales at 16 ounces. That’s roughly 9 ounces heavier and slightly longer than their standard length rails. There are a few quirks with the extended length gas systems and Midwest Industries says they are compatible with most AK-47 variants. The key phrase in that sentence is “most” the video that we have supplied from Midwest Industries does an excellent job laying out the things to look out for when considering purchasing the MI AK-47 Generation II rails. The company made sure with all versions and lengths of their new rail systems to include mounting points for quick disconnect sling mounts. This is a feature that is becoming an industry standard, but it’s still a nice bit of attention to consumers needs and wants.

If you are looking to upgrade your AK-47 series rifle and want to give yourself the flexibility of having rail sections for accessories any of the midwest industries rails would be a solid purchase. These rails aren’t as sexy or rare as the ZenitCo family of Russian rail systems but they are 100% Made in America and are less than 1/2 the price of Russian rails. When you add American made to lower prices and no huge six month waiting list the Midwest Industries rails look like a much better option for consumers.

I know we have some die hard AK-47 fans that frequent our page, Im curious do any of you run rails on your AK’s ? If you don’t why not? With an affordable American Made rail now available would you ever consider running one ? Drop us a line in the comments section we want to hear the debate of your thoughts on stock AK-47 or one with rails. Until then, here is the Midwest Industries rail installation video that we promised you. Installing the rails looks a lot easier than when I installed my ZenitCo Rails.