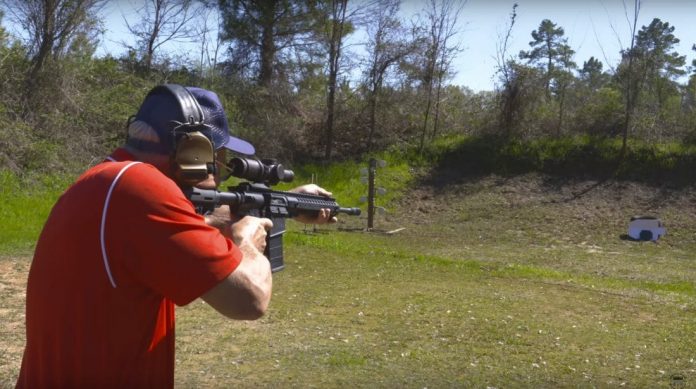 A few weeks ago we brought you film of Richard Ryan zinging an AR-500 plate four times with a vehicle-mounted Mini Gun, which Jerry tries to beat.

In the Full Mag video Ryan borrowed a Lenco Bearcat with an optional M134 sunroof to see how many rounds they could get on the plate before it hit the ground.

While Jerry’s plate is already on the ground, he uses a semi-auto AR-10 (M&P10) instead of a mounted 3,000 rpm gatling gun to see if he could get more hits on the plate than Ryan.

In the end he gets off 12 rounds in 2.05 seconds, which is a “cyclic” rate of about 351-rounds per minute if he could keep it up and had a magazine the size of a whisky barrel.

But he gets a 41 percent hit ratio…