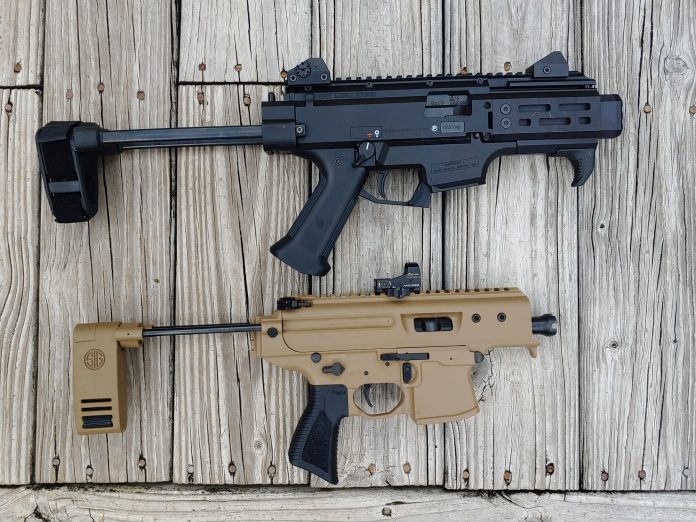 The ‘K’ designator comes from our Teutonic friends and in regards to guns it means compact. Most famously it applies to SMGs and today we are looking at two guns that are K models. They don’t have an official K designation, but they certainly fit the mold. Today are doing a Micro Scorpion Vs Copperhead debate. Both of these guns recently hit the market and both fill a niche role as small SMG style pistols. They aren’t quite rifles or SMGs, and they are a bit larger than your traditional handgun. Both are smaller versions of standard-sized models and they have a lot in common.

We are going to pick apart the differences between both guns and do an unbiased and fair Micro Scorpion Vs Copperhead rundown. The goal is to use data versus my own vague impressions as much as possible. My plan isn’t to declare a winner in our Micro Scorpion vs Copperhead contest but to provide facts about both guns.

Out of the Box

Here we are going to look at what the guns come with and how they come out of the box. The CZ Micro Scorpion comes with two 20 round magazines, a bore snake, the included brace, and a set of robust iron sights. The SIG Copperhead comes with a single 20 round magazine and SIG’s new brace. There are no included iron sights or extras.

Off the bat, the CZ does come with two magazines and iron sights, which make it ready to go out of the box. The Copperhead in this article is equipped with a Burris Fastfire 3 so it can compete on the range.

The goal of both of these weapons is to be small, lightweight, and compact. So the general consensus would be smaller and lighter would be better. If you wanted bigger and heavier there are alternative options for both guns.

The Sig Copperhead is the smaller, lighter weapon. It’s less bulky and more streamlined in design. It features a completely redesigned upper when compared to the original MPX. The Micro Scorpion is smaller than the original but is still a larger and heavier weapon overall.

If you were using this Micro Scorpion Vs Copperhead contest to find a more concealable gun the Copperhead wins out.

If you’ve trained with an AR 15 you’ll have no issues transitioning over to the Copperhead. Everything is basically identical.

The safety is a major pain, and I mean that literally. It digs into the trigger finger as the gun recoils and gets old fast. In fact, one of the first upgrades we saw on the aftermarket was a safety delete. As a safety, it’s a shorter throw than the Copperhead, and it’s very tactile and audible. It’s also a little painful.

Both guns are ergonomic powerhouses, and ergonomics are often a very personal decision. The Copperhead certainly scores points for its ambidextrous controls and AR familiarity. This is not one I can objectively decide in our Micro Scorpion Vs Copperhead debate.

Starting with the weapon dry, and the bolt locked back to the rear I conducted 5 reloads, alternating between each gun as not to get more practice on one than the other. The drill ended when I fired a single shot. I used a Pocket Pal 2 to time these drills and all the drills in this article.

While both guns feature intuitive controls I found myself much faster with the CZ Micro Scorpion. On average I could reload the Scorpion in about 2.3 seconds. The Copperhead took on average of 2.7 seconds.

There are a few reasons. The first is my overall size makes it more difficult for me to handle the much smaller gun. I feel a bit gorilla-like when I’m hunched over the gun. Second, the charging handle and short brace length of the Copperhead means I have to move my head away from the sights to reach and activate the AR-style charging handle.

With the Scorpion, I can keep my sights on target and my body behind the gun as I reach for the forward placed charging handle. The first shot on target was quicker with the Scorpion. Getting the magazine in the gun was not much difference between the two weapons.

I set up a complicated malfunction with a brass case stuck in the chamber. To complete the drill I’d remove the magazine, clear the chamber, reload and fire a round to end the drill. Here, the Scorpion again won once more.

The time difference was 4.5 seconds for the Scorpion and the Copperhead took me right around 6 seconds. The Scorpion’s forward charging handle was another major benefit in getting the gun back in action. The Scorpion also has a much bigger ejection port so it’s easier to fish that piece of brass out of the chamber.

Let’s cover how the guns shoot and handle. First and foremost, they are both reliable weapons and I’ve never experienced a malfunction with either. Both weapons are similar in design and both are made for close quarter’s combat. Neither is made for long-range shooting, but both are accurate well beyond normal handgun ranges.

You can easily engage man-sized targets out to 25 yards and beyond. I’ve used both guns out to 75 yards and landed chest and torso shots on target. Standard accuracy tests are not necessary for these guns as far as I’m concerned. Instead, I wanted to do something more practical.

I went to the 25-yard line and fired 5 rounds in 5 seconds and I repeated the test four times alternating firearms. From there I measured the groups. The Micro Scorpion produced slightly smaller groups. At 25 yards the Scorpion produced roughly a 2-inch group for 4 of the tests. The Copperhead produced a 2.5-inch group on average.

I moved to the fifteen-yard line and repeated the test with 3 shots in 3 seconds. The groups shrunk for the Scorpion to 1.75 and the Copperhead was still roughly 2.5 inches.

Recoil between the weapons is about even. Keep in mind the Scorpion is much bigger and features a wider brace and heavier weight. The Copperhead’s lower weight and smaller brace do not mean an increase in recoil.

Muzzle rise is very mild. Extremely mild, even when rapid firing. Both guns are easy to control. The Micro Scorpion offers a longer handguard, but I tend to grip both weapons by the magazine well.

While technically it’s a tie the Copperhead is an underdog and I’d say the Copperhead has less recoil when you consider how small and light it is. Both weapons in our Micro Scorpion Vs Copperhead article are very easy to control.

Without a doubt, the Copperhead has a shorter, and lighter trigger pull with a shorter reset. The CZ Micro Scorpion isn’t a bad trigger, but its somewhat long and spongy. We can keep this nice and short and anyone who does their own Micro Scorpion Vs Copperhead comparison will find it out for themselves.

As I said earlier I’m not trying to declare a winner necessarily in this Micro Scorpion Vs Copperhead debate. There is no clear winner, and both guns have their strengths and weaknesses. Overall, I’m better with the Scorpion shooting wise. The smaller and lighter Copperhead does have some very clear merit when you are looking for a K Model SMG wannabe.