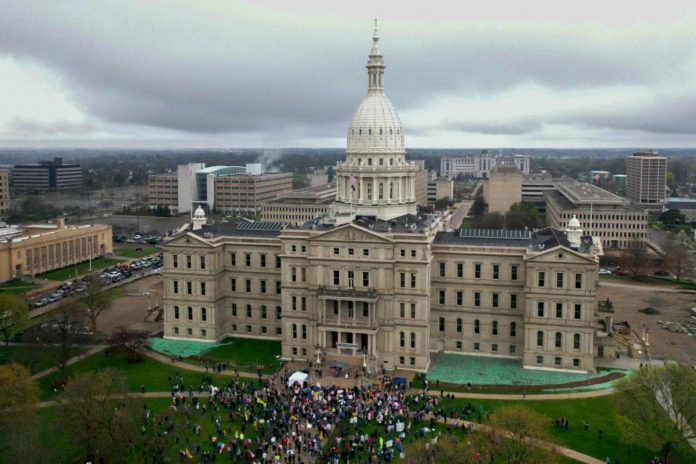 This past week, the Michigan Capitol Commission rejected a ban on firearms at Michigan’s Capitol Building, both within the building and on its grounds.

During a Monday morning hearing in Lansing, commissioners first rejected a measure to ban guns in the Capitol and then one that would have banned specifically long guns. The first motion failed 4-2. The vote on the second was 3-3. Lacking majorities, neither passed.

Despite years of peaceful events where firearms have been present, the issue was raised after protesters who objected to the way Governor Whitmer has handled the coronavirus pandemic were present in the Capitol in late April. Some entered the gallery above chambers with long guns, alarming some Democratic lawmakers.

Among the obstacles to instituting a ban brought up by commissioners Monday was enforcement, specifically the lack of metal detectors, X-ray machines and security checkpoint staff. The cost of implementing a ban would have run between $500,000 to $1.3 million.

There has never been an intentional or negligent discharge of a firearm at Michigan’s current Capitol Building since it was opened in 1878. The recent debate was based on fear and political opportunism by politicians seeking to expand limits on self-defense rights while disregarding Michigan’s Constitution.

Neither the total ban or the long gun ban passed muster. That’s a small but crucial stand our ground victory in retaining our firearm rights under anti-gun Governors and AG’s. With the national stage set as it is, holding what we have could be the first in a new series of legal battles coming.

All of this just underscores how out of touch the politicos are with the general population. 2020 is the year of the gun owner. It is the year that the illusion broke for so many who quietly thought that First Responders were coming to save them. 5 Million new gun owners estimated, based on NICS. Huge increases in minority and women purchasers. 12.1 Million NICS checks Jan-July and that accounts for none of the private party sales which don’t touch the NICS system.

How many folks out there bought from a friend instead of a store? If it’s even remotely a 1:1 ration that is 10 million new owners, not five. From the quiet anecdotal conversations I’ve had the ratio may be much higher in favor of the friend market instead of the commercial. It wouldn’t surprise me to learn that 30 or even 40 million new and preowned firearms found new homes and that ownership has quietly increased by as much as 20% of the US adult population.

Do I have anything beyond anecdotal evidence? No. Just a series of consistent conversations. Those conversations suggest that, socially at least, gun control is a dead argument.