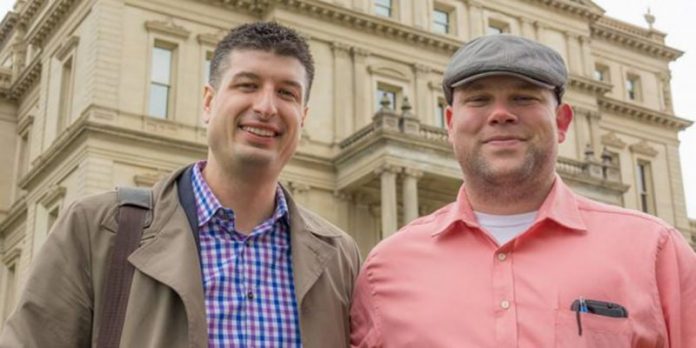 Today several of the 248Shooter crew made it out to the 2nd Amendment March at the State Capital Building in Lansing.  We were joined by roughly 200 other like minded people that included, fathers, mothers, grandparents, kids and all manner of responsible gun owners.

To the surprise of Mothers Demand Action who met at the capital the day before with 30 or so people nobody was shot, nobody was robbed, no crimes were committed and everyone left happy and maybe a bit cold.

It was great to see so many people in a time when gun rights are not on the forefront of our minds the same way they were in 2013 after Sandy Hook. The loss of support on this event from MCRGO was felt though not to the degree that some might have expected.  With outside pressure mounting it would be ideal if the riff of these organisations could be put to bed in an effort to pursue a common ground approach to securing the protection and expansion of State gun rights. 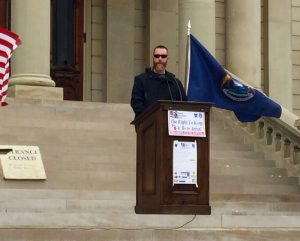 The afternoon started off with a welcoming and an introductory talk by Trek of MDFI who spoke about the importance of the constitution. Like the article run by Dan of MOC earlier this week, Trek took the change the narrative message another step. As American’s we need to fight for the entirety of the Constitution and not just the 2nd Amendment. Instead of dividing ourselves as American Gun Owners we need to establish our group as Americans who own guns. While that may sound like semantics it builds a foundation for a stronger country and a large grass roots movement. No American wants to limit free speech or allow illegal search and seizure.  To support the 1st and 4th amendments is not looked at as radical as they have a larger base of society the backs those beliefs. If we transition from a focus on being “Gun Owners” vs “Responsible Americans” we change the narrative and create a belief in protecting our existing laws.  While this is not the first time this idea has been brought up it is one that has not been focused on enough. I hope all those who heard his speech today take this to heart and apply it in their daily lives. 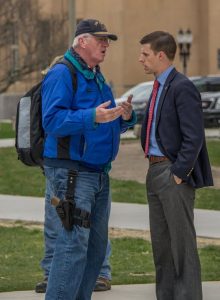 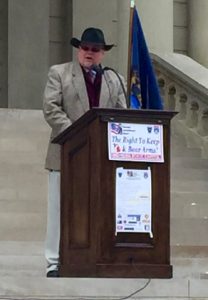 Trek was followed by Rene’ Hawarny of the Well Armed Woman who spoke about the growth in female shooters, the need for specialised gear and training for this market and the steps their group has taken to fulfil those needs. If you are a female shooter it would do you well to look into this group and try to associate with a local chapter.

Several of our State Representatives spoke about the work they are doing to ensure the clear message of the 2nd Amendment is upheld on a state level. It was good to see those who have actively backed the shooting community such as Representative Jim Runestad, District 44, Representative Lee Chatfield, District 107 and Senator Casperson, District 38.

Tom Lambert a contributor to 248Shooter and President of Michigan Open Carry  stepped down from the podium to address the public with his typical patriotic and eloquent message. Tom called for the unification of gun owners in an effort to thwart those who would see us divided and conquered. His message pointed out the advances made by MOC via their court cases that have forced local municipalities to follow state law as well as highlighting the current cases and law that is relevant to ALL gun owners not just Open Carriers.  You can read his recent briefing on the current laws that have passed or are in process HERE.

The keynote speaker was CJ Grisham of Open Carry Texas who traveled to our frozen land to impart the importance of gaining acceptance of open carried firearms and how their actions in Texas has lead to increased gun rights for both open and concealed carriers across the state. Though he was clearly cold we all appreciated the time he took from his daily life to share with us the advancements made in his home state and the advice he had to share with us here in Michigan. One thing was clear Rick Ector’s visit to texas has made him a changed man as he came dressed in his new found cowboy hat and boots.

The day continued along this tone of unification and staunch support of the 2nd Amendment via the remainder of the speakers with detailed accounts of the 1946 Battle of Athens by Rick Ector of Legally Armed In Detroit who called on all citizens to support just laws and remove from office those who seek to disregard their oath to uphold the Constitution by illegal and unjust legislation.  Rick’s message was well received by many in attendance with a load and heartfelt cheer of applause.

The march around the capital was peaceful and tactfully done being led by bike police followed by a legal panel discussion aimed to clear up common misconceptions and the intricacies of Michigan law. Unfortunately though while all who were in attendance acted with tact, common sense and decorum the same could not be said for the anti-gunners.

As the event wrapped up the truck pulling the MGO trailer that was parked on the south side of the building was vandalized. Mike Phillips a board member for MGO brought the MGO trailer up attached to his white pickup. As reported by local construction workers a Prius owner drove by the truck slowly and closely. It was later found the street side portion of the truck had been keyed the length of the vehicle.

Mom’s Demand Action was at the Captial a day before.  This group experienced no vandalism or antagonism from peaceful gun owners. Unfortunately, the same courtesy and respect was not shown to our group the following day. Maybe it was resentment from 3 times as many gun owners showing up to defend our rights vs the paltry amount of support they received, maybe it was the lack of wanton bloodshed they seem to think will occur when gun owners get together. I don’t know the reason or who was responsible for this heinous act but it is clear time and time again that those how try and silence responsible gun ownership prove to be the violent criminals in our society and not the white knights they pretend to be.

Minus this one pathetic jab at the group the day went without a hitch. Nobody was shot, no crimes were committed. Gun owners mingled with each other, police, representatives and non-gun carrying citizens in an uneventfully quiet manner. What did the mainstream media have to say about this? Virtually nothing. In fact any coverage of the day was swept under the carpet in favor of pushing a Democrat-backed bill that would outlaw guns in the State Building and reverse the ban on signage brought int he building. It is a shame to see the blatant disregard for gun rights in media who only focus on illegal gun use instead of days demonstrating responsible gun ownership like we saw yesterday.

In conclusion like the Representatives who spoke from the various delegations, we ask you to not just make one day a year about our rights. Do something, get involved in the local groups. If you can’t do that then write your representatives. Remind them gun rights matter to you. Take it a step further and remind them that your part of other organizations such as a local homeowners group, gardening club, or other group and that your voice matters as a person and a member.

How great it is to see so many in attendance on a cold weekday. We thank all of you who took time out of your busy day, schedule or work time to make it to the Capital. Special thanks to MOC, MOG and the 2nd Amendment March committee for making this all happen.