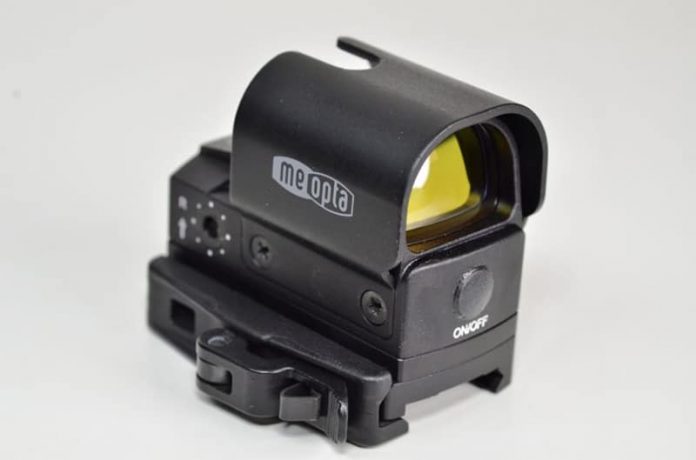 The folks at Meopta met with us during SHOT Show 2017 and promised to send us some gear to test and evaluate and they delivered in a big way. The Meopta MRAD 3.0 is the first of what we hope is many pieces of optical gear to make it into our hands. This isn’t a new offering from Meopta to the firearms market but it has a solid reputation so it was in our opinion a great starting point. Test and evaluate something that has a reputation for being solid and see if it’s all hype or if it’s the truth. We like simple optics that work well, and upon unboxing the Meopta MRAD 3.0 our initial impressions were that the company makes a well built heavy weight red dot. Lets take a look at the stats on the MRAD 3.0

After opening the box and tearing into the paper we set the Meopta MRAD 3.0 on a table to examine it. There are several things that jump out at you when you inspect the MRAD 3.0, the first is that the optic comes with a large hood that is held on by four screws. This hood appears to be both protective and replaceable with the removal of the four screws. This is a great feature for people who are hard on their optics and often bang it into things. This would be a nice advantage for competitors who try their hand at three gun tournaments. The second thing we noticed, this one we found a bit weird was the location of the battery cover. Most battery covers are found on the sides of optics, this isn’t the case with the MRAD 3.0. In the above picture you can clearly see the cover has been notched out in order to has unrestricted access to the battery compartment.

The optic feels nice and heavy in the hand but not ridiculously heavy, I guess I should use the word solid. The MRAD’d function is controlled by the single point On/Off push button located on the front of the scope. It’s a simple function and seems pretty straight forward, the literature that came with the MRAD 3.0 says it has eight daytime settings and eight nighttime settings. I wasn’t able to field test the optic before writing this so I’m not able to give a full account of how the settings work. I literally had time to take the pictures of the MRAD 3.0 before I left for a business trip. That will be corrected as soon as I return.

Mounting the Meopta MRAD 3.0 to the test rifle was easy with the large mount that comes on the optic. The quick disconnect controls make it easy to remove with one hand but not so easy as to make the MRAD come off unintentionally. Adjusting the tension on the quick connect mount is exactly like any other type of quick connect mounting system. Even if you don’t know how to do it, the process takes only seconds to master.

The optic is currently mounted to my 10.5″ barrel AR-15 that is quickly becoming the standard rifle for us here at The Arms Guide to use as a test platform for any red dot style optic we can get our hands on. It’s worth nothing that We also intend to test it on a 16″ version as well, in the name of science of course. We recognize that many of our readers do not have short barrel rifles but the concussion and force of a SBR makes optics perform a little oddly from time to time. That is one of the reasons we like to test optics on both 16″ and 10.5″ rifles. If the optic behaves oddly we want to know.

We had little idea of what the price of the optic was before it was sent to us but with a little research we found out. The optic is not cheap, with an MSRP of $696.20 but since we are stacking it up against a similarly priced optic in the Trijicon MRO it should be a fairly even competition in our minds. I would like to perform a freezing and water submersion test with the Meopta MRAD but I was told that wasn’t exactly allowed unless I want to purchase the optic at the end of the trial. So instead we will use the standard 25 meter zero test then 100 yard test. Be sure to check back in the next few weeks to see what the results were and what we thought of this Meopta MRAD 3.0 red dot. It should be interesting for sure. 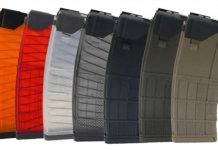