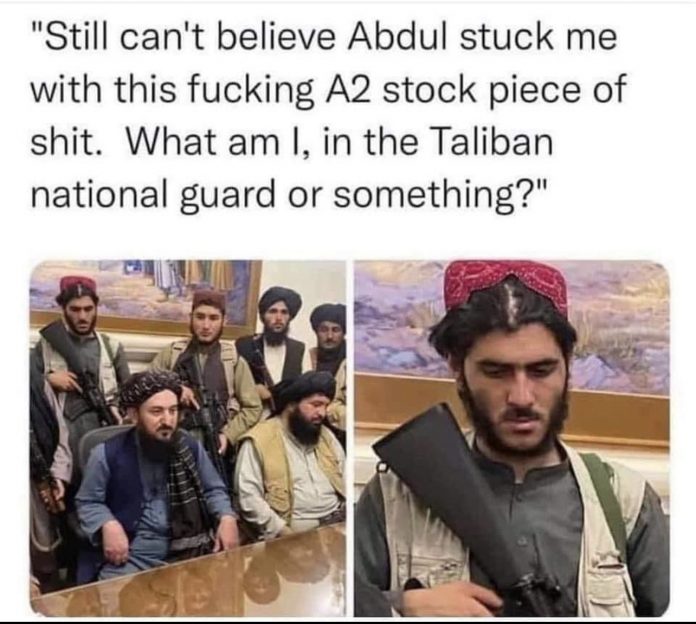 Afghanistan has fallen. We have a lot of anger, a lot of frustration, and some fire memes.

I saw this meme this morning and I changed my whole writing plan for the day.

The A2 is stupid.

Not the M16A2, although that got built partially on a mistake, the A2 length stock.

That one time when the USMC decided everyone was 5’11” and would always be shooting from the prone position resulted in the A2 stock. Hope we don’t have any 5’1″ troops stashed anywhere (I type knowing half-a-dozen such folks off hand) that might benefit from a shorter length of pull.

One of those reasons, the one that turned out to be a mistake, was that the barrel on the A1’s was believed to be bending (it was actually carbon build up and port erosion). The second was that the USMC wanted the M16 optimized for greater distance.

The A2 stock was part of making the M16 into what was essentially a Camp Perry ready known distance rifle. To be shot at nice pop-up pit targets at 200-500 yards. The Army thought 500 was absurd and stuck with 300 when they picked up the M16A2 a few years later. They and the Marines argued about the sights a lot.

But my point is that the stock was not built with the correct mindset. The A1 stock was, it’s length of pull is much more useable by many more users. The A2 stock was too long for most users, especially in the context it was going to be shot offhand. The A2 stock design suffered the same flawed mishap that early pilot seats did, no accounting for user size, just an average.

But nobody is average sized. They have aspects that are, perhaps. With my height and build the A2 actually fits me rather perfectly shooting prone, I still swapped my A2 stock on my A4 for a B5 adjustable.

Sizing is key to ergonomics

Yes we can build a range of sizing, but the key factor is ‘range’ of sizing. Adjustable stocks for different size folk are as crucial as putting your seat in the right spot in the car to reach pedals and see mirrors. Too long in length of pull and the rifle is unwieldly. Too short and you have no support on the stock.

So, I get it upset Taliban dude stuck with a long as hell fixed stock. I understand. But you have select-fire provide courtesy of my government and I don’t, so I am not that sympathetic.