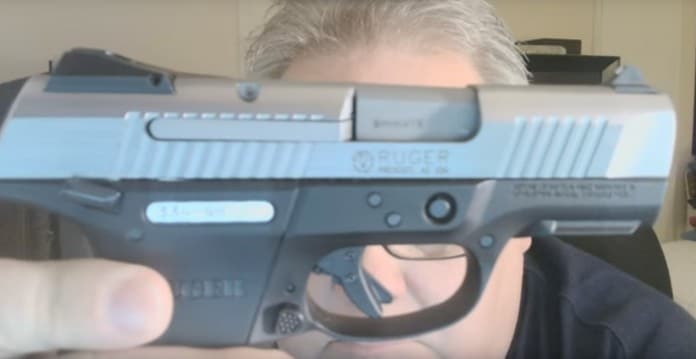 Headed to Washington at the invitation of the White House is Mark Carman who started his ACRGO group last month and Guns.com speaks with him.

Carman came to a degree of national attention last month when he posted an 11-minute rant on Facebook, shown above, accompanied by his Ruger SR9 and an ATF Form 4473, on the subject of expanded background checks on gun sales. Terming himself repeatedly a responsible firearms owner in a Fred Thompson-esque southern drawl, Carman advocated the same type of licensing for gun owners as you would for that of a motorcycle operators permit.

Among the changes he advocated were gun registration — giving the gun a “birth certificate” — and biannual qualification for gun owners.

The response Carman received from the video, which has some 126,000 views since posted on Oct. 3, two days after the Umpqua Community College mass shooting in Oregon, led him to start the American Coalition for Responsible Gun Owners. The group’s stated mission is to reduce gun violence in America via helping to implement expanded background checks to include most gun transfers. As a limited liability corporation started on Oct. 14, the group sought crowdfunding as it  launched a MoveOn petition advocating expanded background checks that has received 38,000 signatures.

Now, Carman has been invited to the White House next week to meet one-on-one with Valerie B. Jarrett, a senior advisor to President Obama, and to address members of Congress and the Senate on the issue of gun violence.

Carman spoke to Guns.com Thursday about his organization and his mission.

Chris Eger: Would you classify your group as being pro-gun control?

Mark Carman: No! Not at all. We are simply trying to find the middle ground between the person that wants to take guns away from everyone and the person that thinks everyone should have a gun and not be subject to any sort of regulation.

Chris Eger: How many active members does the ACRGO have? We noticed you had 6,100~ Facebook followers added since Oct. 7 but how many actual people does the group consist of?

Mark Carman: We actually don’t have a membership per se. What we have is an open forum for discussion with about 600-700 active participants. Depending upon the topic it may get a lot more interest.

Chris Eger: What inspired you to form your group and when was it formed?

Mark Carman: I actually went out and bought a gun from an individual in the parking lot of Big Lots. When I got home, I realized that although legal, the manner by which I had just acquired that gun was a gaping hole. Although I consider myself a responsible firearms owner/handler, anyone, with any background, or any intent could acquire one just as easily.

When the shooting occurred at the college in Oregon gun violence became a hot topic again. The President came on TV and in a speech asked for the help of gun owners in effort to help tighten some of the loose ends in our current system. His speech caused me to decide to try and reach out to gun owners — not as a gun grabber — but as a gun owner in effort to point out that we do have these holes in our system in many states.

Chris Eger: Are you allied with other such gun safety groups as Everytown for Gun Safety, Moms Demand Action, or the Brady Campaign to Prevent Gun Violence?

Mark Carman: No. We share some of the same ideology in that we agree with those entities that background checks for every gun purchase is a good idea. We also believe that there should be some accommodation or people who live in remote areas who could not reasonably get to FFL to facilitate a private party sale, that local law-enforcement good conduct the check, review and collect the 4473, and sign off on the bill of sale.

We do not believe that the Second Amendment should infringed. We also do not believe that it would be infringed by requiring due diligence on the part of a firearm owner when disposing of a firearm. That’s the missing element. It is of course illegal to transfer ownership of a firearm to someone who is in ineligible to have it. The missing element is that there is no requirement on the part of the private party seller to know or attempt to learn the eligibility of a private party buyer.

I personally would like to see the implementation of something along the lines of the TSA pre-check for people who buys and firearms as a hobby or as a collector so that they wouldn’t have to have a background check each and every time they make a transaction. For example, by me having a concealed carry permit I don’t have to have a background check each time I make a gun purchase through an FFL. The presumption is that I am already cleared purchase. We are OK with that. The more extensive background check, fingerprints check, registration of name and license with the local authority, etc. should be sufficient to prove eligibility.

Mark Carman: No. I have participated in a petition sponsored by MoveOn.org but we are not affiliated with MoveOn for any other purpose. We have tried to be very clear in our position. Our agenda is exactly as outlined in those previously referenced five points.

Chris Eger: Do you see your group allying with pro-gun groups such as the NRA or Second Amendment Foundation?

Mark Carman: Perhaps. We are very focused on training and safety. To my knowledge, no entity does a better job of teaching firearm safety, storage and handling practices than the NRA. We would embrace a working relationship with the NRA on certain things. Again, we are not anti-gun. We are pro-training, pro-responsibility, pro-due diligence. In truth, we represent many of the same things that the NRA once advocated strongly for, such a background checks.

Chris Eger: What is your source of funding?

Mark Carman: We are self-funded by me. In addition to my own resources, we have raised roughly $5,000 through a GoFundMe page.

Chris Eger: We noted the GoFundMe drive and the LLC filing, but do you have a tax-free status or accept donations other than through the crowd sourcing drive?

Mark Carman: We do not. We will likely become a not for profit but as of now, we are still organizing and defining who, what, we are as a group. Remember that this all started out with just me doing a video posted to Facebook, then tagging seven of my friends. I had no intention of starting a group, it just kind of happened. I was really just kind of spouting off my own opinions and it resonated with a whole bunch of people. In the past month and a half, since this started, we have attempted to listen to both sides and find ways where we can agree that gun owners should be allowed to have guns, and people who don’t like guns should be able to feel safe and that we as gun owners are doing what we can to help manage who gains access to firearms through one of us.

Chris Eger: What do you intend to present in Washington to the President and lawmakers? Do you have a platform other than the stated five-point purpose of the group?

Mark Carman: The five points are what we have determined it to be our specific platform. I have my own ideology of a perfect world but some of my personal feelings are neither practical in reality nor legislatively feasible. Therefore, I too must be willing to compromise in the same manner as I’m asking others to compromise if we are going to find something that will be acceptable to all side of the issue.

The petition we will present addresses the fact that there is no definition of what constitutes the difference between a “casual seller” and one who is “engaged in the business of selling firearms.” The Justice Department rendered an opinion that if an individual has his/her federal firearms license revoked, the individual could transfer their inventory to themselves as an individual and continue to sell them. That just seems wrong.

Then we have people who have inventory, employees, take credit cards, have signage, have advertisement, records, and are selling firearms as private individuals. I would think that people who have FFL would resent that. Also, think that I should be required to have a federal firearms license. I just think that it is wrong to be legally allowed to set up and sell firearms on the side of the road like watermelons or boiled peanuts. So where is the line between proper regulation and causational infringement?

Chris Eger: As expanded background checks for all gun transfers to include private sales seems to be the primary objective supported in your five-point purpose, would ACRGO disband if a Manchin-Toomey style bill became federal law?

Mark Carman: I would have to say yes. As I have continually pointed out I never set out to be an advocate, a politician, a world changer, or anything of the kind. The video that I put out was specifically directed at gun owners in an appeal for us to be proactive and self-police our own responsible regulations. If our objectives were achieved, we would no longer have a purpose. Manchin-Toomey, the way I read it, meets the standards for which we advocate.

Chris Eger: In your video, you advocate that gun owners should qualify twice a year. Is that a goal of the group and in theory if a gun owner could not complete a qualification successfully, say due to illness or infirmity, would that translate into having firearms rights revoked under such a scheme?

Mark Carman:  And here’s a perfect example of where my ideology doesn’t fit with reality. It’s a grand idea to think that we could require people to re-qualify annually but as you pointed out, in practical terms how would that actually work? This is why in our five points we advocate training as a prerequisite to purchasing a firearm. We also believe that there should be certain exemptions from having to take a civilian training course if one has already received verifiable, acceptable firearms training such as military or police service. I also believe that there should be an age cut off where people of a certain age would be exempt from having to be tested as long as they can past the criminal and psychological background exam.

Chris Eger: Finally, is there anything else you would like to add?

Mark Carman: It’s really easy to get caught up in the argument and make ones point without ever hearing the other side. I believe that with civil dialogue and just listening to each other without getting angry, without threatening, without violating people’s constitutional rights to either free speech or carrying a gun, we have a chance of finding middle ground. That’s all we are seeking it’s what we believe is the middle between too many rules equating to a constitutional violation, and too few regulations to keep guns from getting into the hands of people without training and verification ones eligibility to own firearms.

Thanks to Mr. Carman for taking the time to answer the questions. The interview has been edited for clarity and brevity.