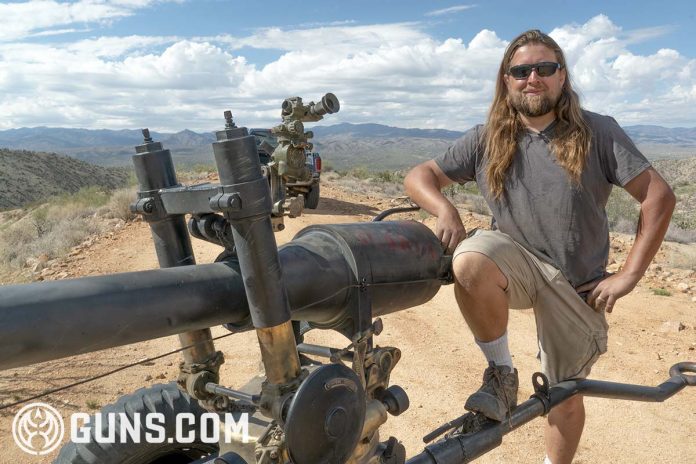 Meet Icarus, a 105mm recoilless rifle that blows a big, violent fireball out the back when it fires. “If anything is behind this gun it will blow it to smithereens,” said big gun expert Robert Bigando. Icarus is Dangerous Bob’s most dangerous gun.

Bigando is a regular at the semi-annual Big Sandy Shoot in Arizona where other big gun and machine gun owners meet up to celebrate their liberty loving hearts by popping off a few rounds and chunks of lead.

“The 105 is the scariest of all the cannons I’ve ever owned and probably, hands down, the most dangerous of all the guns that are out here,” he said about the wide range of weapons on the firing line.

In Greek mythology, Icarus fell out of the sky when he flew too close to the sun. After heat melted his wax wings, he fell into ocean and drowned. True to the spirit of the cautionary tale, Bigando lent the name to the recoilless rifle as a warning of the potential dangers.

“I named this one Icarus as a friendly reminder that even though I could become comfortable with this gun — and I’ve shot it several times from the shooting position — I should probably back off and use a lanyard … there is zero room for any type of error,” Bigando said.

Bob Bigando standing next to Icarus, the 105mm recoilless rifle at the Big Sandy Shoot in October 2018. (Photo: Ben Philippi/Guns.com) Bigando explained what makes Icarus so dangerous is the unique way in which the gun functions. The 105mm round the gun fires has a perforated casing, so the hot gases that push the projectile out also exit out of the hole at the gun’s rear. The blowback makes it look like a rocket taking off.

Although the gun was designed for an operator to fire from a seat next to the gun, there’s no protection, Bigando continued. On top of that, using the wrong amount of powder or a different weight projectile when making the rounds could cause the gun to explode.

But, Bigando added, as long as the right amount of powder is used and weight of projectile are dead on, the gun will fire perfectly and the two opposing forces will cause the gun to have no recoil, hence the name.

“Everything has to be just right and if everything is just right, the gun fires,” Bigando said. “There’s nothing quite like it.”