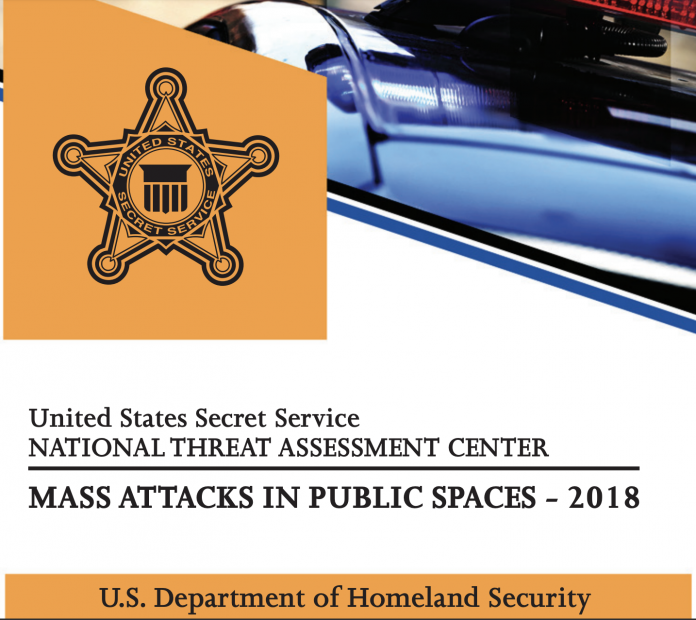 MAPS (Mass Attacks in Public Spaces) is a report completed by the US Secret Service that studies the incidents of mass casualty violence inside the United States. The report for 2018 was recently brought to me attention via an opinion piece on The Hill, the report was published this month.

While the opinion columnist uses it to make an impassioned plea for gun control I wanted to look into the compiled data for myself. The considerations section at the end is especially worthy of note.

Like the year before, 2018 saw incidents of mass violence impact the places where we work, learn, worship, or otherwise conduct our daily activities. Consistent with previous research from the Secret Service, these attacks were found to be motivated by a variety of goals, grievances, and ideologies. The attackers varied widely on demographic factors, and while there is no single profile that can be used to predict who will engage in targeted violence, focusing on a range of concerning behaviors while assessing threats can help promote early intervention with those rare individuals that pose such a risk. [emphasis added]

Mental illness, alone, is not a risk factor for violence, and most violence is committed by individuals who are not mentally ill.

Two-thirds of the attackers in this study, however, had previously displayed symptoms indicative of mental health issues, including depression, paranoia, and delusions. Other attackers displayed behaviors that do not indicate the presence of a mental illness, but do show that the person was experiencing some sort of distress or an emotional struggle. These behaviors included displays of persistent anger, an inability to cope with stressful events, or increased isolation.

A multidisciplinary approach that promotes emotional and mental wellness is an important component of any community violence prevention model. For example, a robust employee assistance program (EAP) can help to promote mental wellness in the workplace, whether that involves facilitating mental health treatment or assisting with other personal problems, like substance abuse, financial struggles, or problems in a personal relationship.

The importance of reporting

Since three-quarters of the attackers had concerned the people around them, with most of them specifically eliciting concerns for safety, the public is encouraged to share concerns they may have regarding coworkers, classmates, family members, or neighbors.

Such reports could be made to workplace managers, school administrators, or law enforcement, as appropriate. While over-reporting is not the goal, a reasonable awareness of the warning signs that can precede an act of violence may prompt community members to share their concerns with someone who can help.

Systems can be developed to promote and facilitate such reporting, and people should be encouraged to trust their instincts, especially if they have concerns for someone’s safety. For example, several states have recently developed statewide reporting infrastructures that allow students and others to utilize a smartphone app to submit anonymous tips to a call center staffed by law enforcement. This type of program can facilitate not only a law enforcement response to reported threats, but also a community-level response to reports of bullying, suicidal ideation, self-harm, or depression.

Since 2010, the Department of Homeland Security has effectively promoted the “If You See Something, Say Something®” national campaign, originally developed by New York City’s Metropolitan Transportation Authority, which encourages the reporting of suspicious activity.

In many of these cases from 2018, members of the general public successfully performed their role in the “See Something, Say Something” process, by reporting their concerns to someone with a role in public safety. At that point, the responsibility is on the public safety professionals to “Do Something,” namely assessing the situation and managing as needed.

By adopting a multidisciplinary threat assessment approach, that standardizes the process for identifying, assessing, and managing individuals who may pose a risk of violence, law enforcement and others are taking steps to ensure that those individuals who have elicited concern do not “fall through the cracks.”

While law enforcement has a key role to play in the prevention of community violence, intervening with individuals who may pose a risk is not the responsibility of law enforcement alone. Particularly in those instances where a concerning individual has not broken a law, the relationships between law enforcement and other community resources become paramount.

Law enforcement personnel are encouraged to continue developing close partnerships with the mental health community, local schools and school districts, houses of worship, social services, and other private and public community organizations. The mission of law enforcement in the United States is public service oriented, and that mission will be most effectively executed through multidisciplinary and collaborative community efforts.

Targeted violence has a profound and devastating impact on those directly involved and a far reaching emotional impact to those beyond. Because these acts are usually planned over a period of time, and the attackers often elicit concern from the people around them, there exists an opportunity to stop these incidents before they occur.

Threat assessment is one of the most effective practices for prevention. Many of the resources to support this process are already in place at the community level, but require leadership, collaboration, and information sharing to facilitate their effectiveness at preventing violence.

The Importance of Threat Assessment

“Threat assessment” refers to a proactive approach to violence prevention. It is an investigative model originally developed by the U.S. Secret Service to prevent assassinations, but has since been adapted to prevent all forms of targeted violence, regardless of motivation. This includes K-12 school shootings and acts of workplace violence. When implemented effectively, a threat assessment generally involves three key components: Identify -> Assess -> Manage

Research indicates that the majority of perpetrators of targeted violence elicit concern in others prior to the attack. We rely on those people who observe such concerns to identify the individual to law enforcement or to someone else with a public safety responsibility.

In educational settings or workplaces, concerns may be reported to a multidisciplinary threat assessment team that works in conjunction with law enforcement when needed. The responsible public safety entity is then tasked to assess the situation to determine how they can manage any risk of violence posed by the individual.

With a focus on early intervention, this systematic approach is an important component of any safety plan. It allows communities to respond appropriately to a broad range of situations, from those individuals who are displaying a low-level concerning behavior to those who may pose an immediate and imminent risk of violence.

What’s absent from the MAPS Considerations?

It is never suggested that a public ban on any firearm type would be a useful step in reducing mass violence. It’s lack of inclusion suggests the strategy was found wanting and ineffective in the goal of preventing attacks. Were it an effective solution or a method of execution viable for impacting mass casualty events it would be included.

Like the gun ban, a capacity ban on magazines for firearms is not listed under the considerations for limiting mass casualty attacks. Again like the firearm ban, a public prohibition on magazines of above an arbitrarily picked number of rounds would not realistically prevent attacks or reduce casualties. Just as banning certain methods of injury while leaving others available would not suffice nor significantly alter outcomes, altering a firearms capacity wouldn’t influence method of injury enough to make mass casualty less likely in any viable way.

Yes the considerations recommend reporting and intervention on a personal, professional, medical, or legal means as necessary but the key factor in the recommendation, as opposed to the legal framework of most ‘red flag’ legislation, is early intervention to help in place of just a confiscatory action. Red Flag legislation seems to have that goal in mind but crafting the framework to minimize abuse and protect the rights of persons who may be under suspicion (rightly or wrongly) is not high among the priorities of lawmakers.

“Red Flag” legislation, in brief, sounds good. On the surface it seems like a good plan. The devil is in the details, as the saying goes, and the lack of legal protections for the “flagged” can make the law, designed for safety, into a weapon too easily.

While public mass violence is a very open and therefore terrifying spectacle and steps must be taken to safeguard against it, it is not a cause for rash overreactions and drastic changes in law.

Mass violence accounted for 91 deaths and 107 injuries across the nation in 2018. By comparison, Chicago is sitting at 296 homicides right now, including an 8 victim shooting incident where 3 died. But because that was “city violence” associated with established criminal activity it doesn’t get the attention that an incident like Gilroy does.

There are things we can do. There are steps we can take. A ban isn’t among the effective ones.