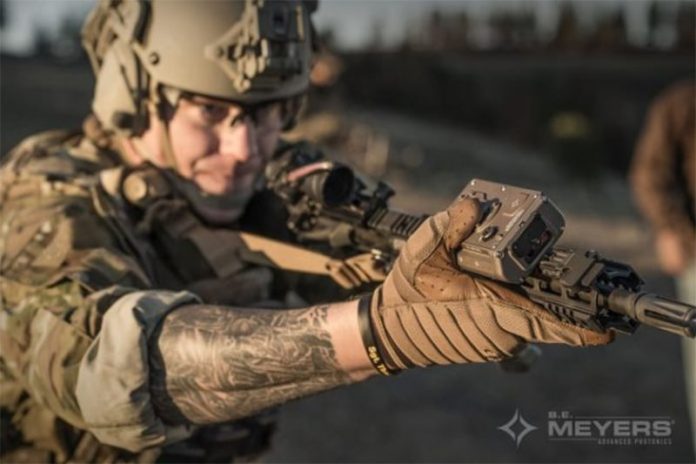 It is the new USMC Ocular Interruption System, and a Redmond, Washington-based company just secured a $49 million contract to supply it.

B.E. Meyers & Co., Inc., announced earlier this month that the Marines have adopted the company’s Glare Recoil weapon-mounted hail and warning laser system as part of the OIS program. The 17-ounce Recoil, classified as the LA-22/U by the military, is a 250mW maximum output green laser dazzler that also doubles as a laser rangefinder.

According to Meyers, the device is used to project a “veiling glare” out to several kilometers. Considered eye safe and unable to blind–which is against the Geneva Convention– it is designed to disorient the target and obscure their vision.

In speaking with Marine Corps Times, Ryan Smith, team leader for force protection programs at Marine Corps Systems Command, said the branch is expecting to field 1,848 units by early 2019, which can be used to “warn or visually suppress” out to 500 meters without firing a shot.

The LA-22/U will replace two other Meyers dazzlers, the 250mW Glare LA-9/P, and the 125 mW 532P-M which have reportedly been in service for the past seven years.

Both the Navy and Marines have used standalone and weapon-mounted dazzler devices for signaling or as a non-lethal deterrent to hostile force for nearly a decade.