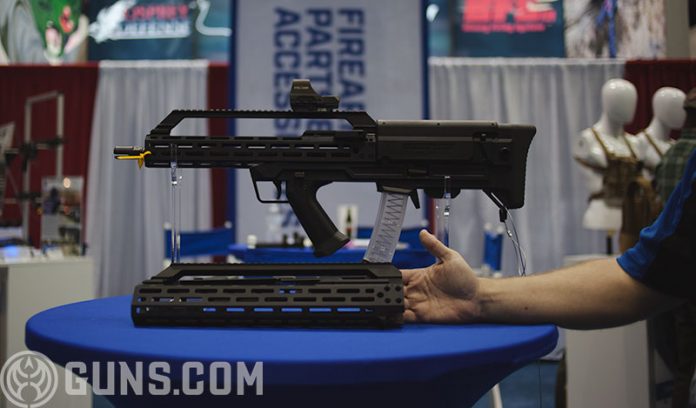 Bullpup fans rejoice as Manticore Arms took up the call to arms, designing a new kit to flip a CZ Scorpion Evo carbine into a full-on bullpup.

Announced late last year, Manticore Arms brought its bullpup design to the National Rifle Association’s Annual Meeting in Indianapolis April 26-28 so consumers could get a first look of the new product. The conversion, available as a stand-alone kit or as a factory offering straight from CZ USA, brings a whole new world to Scorpion Evo fans. The Manticore Arms kit retains the CZ Scorpion Evo’s guts, but adds a new buttplate, lower receiver and cheek-rest to bring together the bullpup look. Manticore also ups the ante with the addition of an aftermarket foreend that will be available after the bullpup makes its debut. The forened features a carrying handle that helps raise optics to a better level.

Though Manticore Arms engineered and created the kit, CZ USA will be the ones to officially launch it. No word yet on when the bullpup will make its way into consumer’s hands but the kit itself will eventually retail for $399. The carry handle rail, still in the works, will likely retail for under $200.