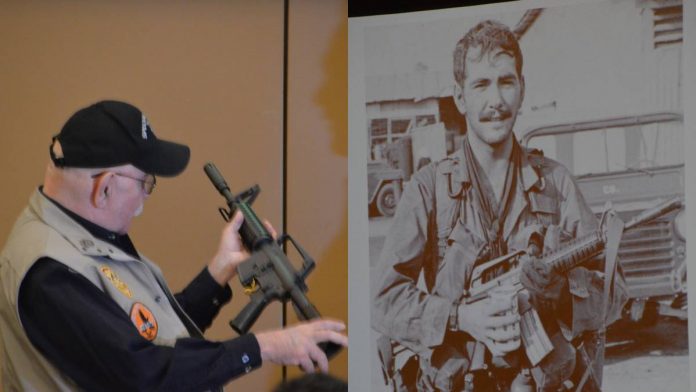 Plaster, receiving a new XM177E2 from Colt last month, left, contrasted with a slide during his presentation on the weapons of MACV-SOG in the Vietnam conflict, showing him as a Green Beret armed with his original weapon. (Photos: Chris Eger/Guns.com)

After much use in South East Asian locales long classified, Vietnam-era Green Beret John Plaster recently got “his” Colt XM177E2 back.

Plaster, a retired U.S. Army major, served three combat tours between 1968 and 1971 as a member of the secretive MACV-SOG special operations unit that conducted covert operations in Laos and Cambodia during the Vietnam War. Since the 1980s, he has gone on to be a noted sniping instructor, author and military historian, penning several non-fiction books and even contributing to popular video games such as Call of Duty: Black Ops.

Plaster recently wrote an article for the NRA’s American Rifleman publication dealing with the use of the CAR-15, an early forerunner of today’s M4, in Vietnam. Relating his personal SOG experience with an issued Colt-made XM177E2 carbine during the article, the Special Forces veteran mentioned that the serial number of his personal gun was 905442, noting the weapon, “saved my life many times.”

Unknown to the Major, now in his late 60s, his reminiscences triggered a series of events behind the scenes that ended with Justin Baldini, director of product marketing for Colt, presenting Plaster with a semi-auto non-NFA reproduction of the XM177E2– with the same serial number as his military-issued CAR-15– last month. The impromptu ceremony came at the 148th National Rifle Association’s Annual Meetings in Indianapolis as Plaster was set to start a presentation on the weapons carried by Vietnam-era SOG teams. Colt’s Retro Classic series XM177E2 Commando is built to the original Colt Model 629 specifications from the 1960s to include a vinyl-acetate coated buttstock and “U.S. Property” rollmarks. To be NFA-compliant, the 11.5-inch barrel has an extended flash hider designed to replicate the original moderator and it is not select-fire. (Photos: Chris Eger/Guns.com)

Baldini related to the crowd that laying hands on the gun took some effort, as it had already shipped to a distributor, but in the end, was accomplished to provide the retired commando with a tangible link to his “old” 905442.

The first thing that Plaster did when presented with the new 5.56mm carbine was note with a trace of remorse that it was not select-fire. At least nine Green Berets attached to SOG received the Medal of Honor for their actions in Southeast Asia during the conflict and as Plaster noted, some 300 lost their lives during missions. The highly classified unit was only recognized with a Presidential Unit Citation in 2001.

“Pursued by human trackers and even bloodhounds, these small teams out-maneuvered, outfought and out-ran their numerically superior foe to uncover key enemy facilities, rescue downed pilots, plant wiretaps, mines, and electronic sensors, capture valuable enemy prisoners, ambush convoys, discover and assess targets for B-52 strikes, and inflict casualties all out of proportion to their own losses,” noted Secretary of the Army Thomas White of MAC-V-SOG in 2001.