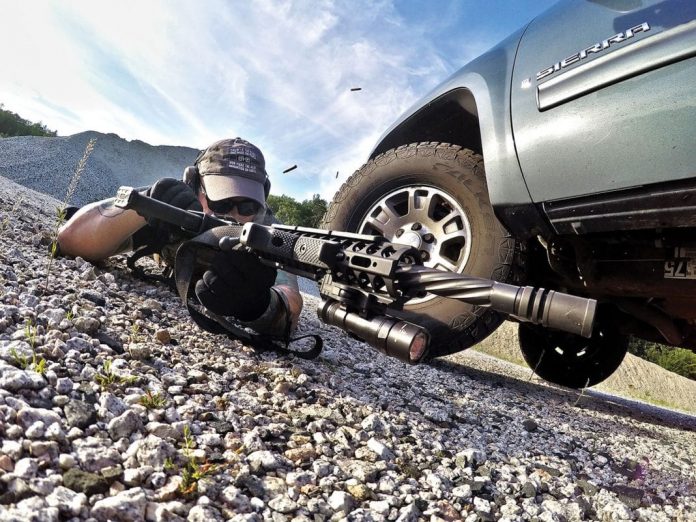 More than just another direct-impingement carbine

One of the first reliable piston ARs I used was an LWRCI. The early 10.5-inch upper it was rugged, reliable and accurate (uncommon at the time). Early short-barreled ARs were spotty in general, especially when suppressed. Over-gassed, they were dirty, harsh and loud. The LWRCI was one of the most robust and ruggedly built I had ever seen or used. After years of hard use it was replaced with a 6.8 SPC, the start of an entirely new adventure. LWRCI fixed that as well dealing with the magazine issues presented by the larger 6.8 SPC case. Using both the standard and short barreled versions they are completely reliable. The chance to test short-barreled versions of the Individual Carbine–PSD (Personal Security Detail) chambered in 5.56 NATO reminded me how well LWRCI rifles work. But patrol rifles in longer barrels have less need for a piston design and the costs that go with it. For years, customers have been clamoring for LWRCI to build a direct-gas-impingement AR of the same quality, and they finally did in LWRCI-DI 556.

Piston rifles are great; they do things most DI guns just won’t. Shorter barreled piston ARs work better and handle suppression more easily. Unfortunately they are expensive, can be heavy and add some parts and complexity. Most applications just have no need for either a short barrel or suppressor. The vast majority of civilian applications (LE or otherwise) are met easily with a 16-inch barrel using a simple direct-impingement gas system. Simplicity in the field is critical and nothing meets that need like a well built AR using a tried and true direct-impingement gas system. The vast majority of ARs fielded today remain direct impingement and likely always will.

This rifle starts with LWRCI’s proven “double coined” forged receivers. Forged from 7075 aluminum, they are among the strongest you can buy, with great attention to detail, consistent manufacture and uniform construction. Equipped with ambidextrous controls and an oversized trigger guard they are well suited to use in any condition. Magpul’s rubber coated MOE grip provides comfortable control. An LWRCI compact stock keeps the LWRCI-DI 556 usable with plate carriers or other duty gear. Internals are mil spec, including the trigger.

Nestled in the upper is a cold hammer forged 1:7” twist barrel using M4 cuts and a 5.56mm NATO chamber. Fluted for less weight and improved cooling, it is capped with an A2 style flash hider. Built from 41V45 steel. it is stress relieved and coated in NiCorr for longevity and corrosion resistance. Gas is delivered to the Enhanced DI bolt carrier group using a NiCorr coated gas tube.

Covering the barrel is a 15-inch rail developed specifically for the DI rifle. Attaching solidly at the receiver, it keeps the barrel free floated. Rails can be attached at the 3, 6, and 9 o’clock positions. The continuous top rail facilitates sighting enhancements and additional accessories. LWRCI’s rails are solid and slim, adding less to the overall diameter and allowing you to add equipment without bulk. Rail panels are provided along with their Angled Forward Grip. Two rails are included, a short one for lights and an angled rail that includes a QD sling cup along with bolt-on side covers. There is also a QD sling cup on the back of the Angled Forward Grip. Each rifle ships with a single Magpul 30-round PMAG.

Just as the red-dot sight has all but supplanted iron sights on working ARs, the low powered optic is starting to gain increased popularity. The ability to identify your threat or target is imperative, and optics make that exponentially easier. Add age to the equation and it becomes more advantageous. While I can still hit targets at 300 yards with a red-dot, it is a ton easier with a low-power variable optic. Trijicon’s Accupoint is one of the most rugged, reliable and simple systems available. Using a Mil-Dot reticle and fiber optic center dot the 1-6x24mm Accupoint is equally at home from CQB to 300 meters. Six power is plenty for most engagements using this carbine, facilitating proper target identification and increased accuracy. Using a 30mm tube it is light, short, and very handy. It was mounted in an American Defense Manufacturing AD-Recon Cantilever mount. Having used several over the years they are strong, light, easy to use and simple to setup. Priced reasonably they provide an option for duty or professional weapons that will not break the bank.

Backup iron sights are mandatory for me on any rifle used for duty or self defense. Folding sights won’t interfere with your optics but require you to activate them, presumably under the stress of sighting through a now broken or obstructed optic. That means removing your optic, flipping up both sights, then reacquiring the threat. Offset sights eliminate all that. Properly timed to your barrel they operate like standard A2 sights. Turn the rifle to about 11:00 and go to work. With nothing to flip up or remove the transition is all but instant. Dueck Defense rapid transition sights are among the best and are available with tritium inserts. I have accurately engaged targets to 300 meters with these, so they are truly backup sights not just CQB stop gaps. Surefire’s scout light was attached to the hand guard using their RM45 offset mount.

I produced groups under an inch, with the best measuring just over .60 inches using Barnes 70-grain TSX. Trijicon’s Accupoint made it pretty easy to stay at or around an inch with everything. LWRCI barrels are among the best in the industry and are capable of excellent accuracy. Anything at or under an inch is excellent, especially for a carbine designed for combat not bench rest competition. With a 1:7” twist barrel it handled all the 77-grain projectiles with ease. Everything was pretty accurate, with all of the 62- to 64-grain ammunition consistently so. All of the 52- to 55-grain ammunition worked well and the Barnes AR 52-grain was very accurate.

Over the course of a couple sessions using both my vehicle and some 3-gun obstacles for cover, the DI 556 performed well. Well balanced, it rested easily on barricades and other obstacles. Several new BCM Mil-Spec Teflon Coated 30 round magazines were set up with CTT Solutions magazine caps and put to the test. Nestled in an Esstac Trim Boar chest rig provided plenty of ammo for most any realistic operation without all the weight. Dropped on concrete, gravel and dirt, the CTT magazine caps stayed put. Operation was flawless during several drills.

LWRCI was one of the first companies to employ fully ambidextrous controls, and these are very intuitive. Much of my practice of late has been off hand. This rifle was even used in an LE training session entirely from my left side. Once my brain got dialed in, in reloads and manual operation were as fast as my strong side. Unlike some you can lock the bolt open with either side making malfunction drills faster. Coupled with their compact stock it was one the most maneuverable and workable ARs out there. For those of us with short arms, or when a plate carrier is used, it is excellent.

LWRCI’s DI 556 is as good as any top-tier AR I have tested from any major manufacturer. Short of a custom rifle it just does not get any better. Everything on this rifle is top notch and built to last. It is built to the hilt, designed for anything you can throw at it. The gas block is robust, pinned, and properly gassed. Forged receivers are incredibly strong and light, and these are among the best. LWRCI’s enhanced bolt carrier group only adds to the longevity, reliability and maintainability. Their barrels are among the best in the industry. Fluting keeps the weight down, and adds a nice look. Handguards are smooth, strong and versatile. Everything about this rifle is built for those whose lives depend on its operation. If that’s you, make sure you look at the LWRCI-DI 556. For more information, contact LWRCI, Dept OT; Tel.: (410) 901-1348; Web: www.lwrci.com